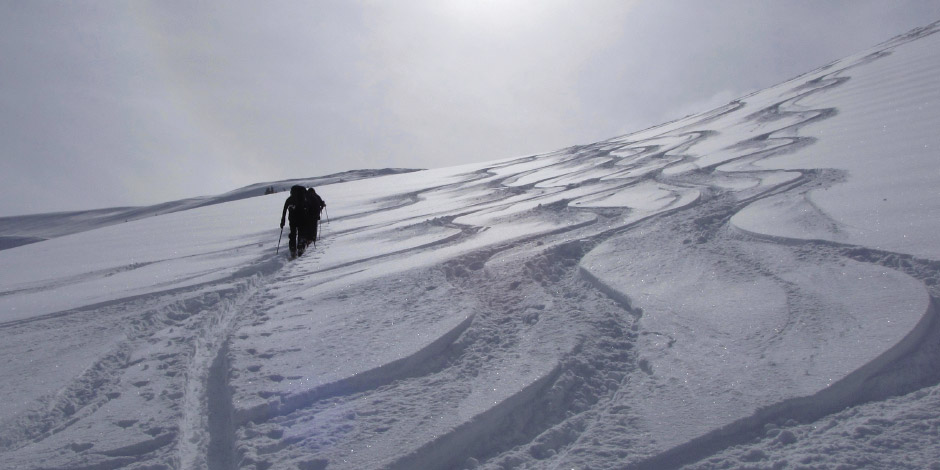 Making smart decisions in the backcountry.

It’s Saturday morning at Mount Cain. The 50 centimetres of new, inbound snow is becoming tracked out. You begin to consider hitting the backcountry for fresh turns. As you crest the top of the mountain on the t-bar you see a group of friends. One shouts over his shoulder as they ski away, “West Bowl, buddy!” You follow. All too quickly, you’re watching your buddies launching into West Bowl. They have avalanche gear (transceiver, shovel and probe) and they’re spacing out as they jump into the bowl. Still, something doesn’t feel right.

In winter backcountry pursuits, the decisions we make are critical to survival. The vast majority of great backcountry terrain is also avalanche terrain. 90% of the avalanches that injure or kill are started by those caught in them or someone in their party. Simply put, people get hurt because they make decisions that put them in harm’s way.

As professional guides, we avoid being in a “how did I get here” situation by implementing structured planning before we leave the parking lot or the house. Everyone will benefit from the same approach to decision making when traveling in avalanche terrain. Of course, even planned outings—including those by professionals—can go wrong because of the “human factors”.

Coined by the aviation industry, “human factors” refers to the habits, biases, emotions and communication challenges everyone faces and which can easily, and often subtly, derail a decision making process. The good news is that there are predictable and well-documented patterns to how these unconscious influences can affect our decision making. Knowing the enemy allows you to recognize him when he shows his face.

Familiarity: Knowing an area well makes it more likely users will make riskier decisions regardless of other factors affecting your decisions. It’s a common—and deadly—mistake.

“Summit fever”: Being committed to a particular objective—a run, peak or first descent, for example—is another common factor. Research shows that a strong desire to appear consistent in our commitments will often cloud our decisions, despite “red flags” popping up.

The Fresh Tracks Trap: We’ve all been there. Watching other people schralping the goods provokes us to race for our own. Decisions become hurried, inevitably resulting in riskier outcomes.

Social Facilitation: Have you ever felt emboldened by the fact that you were part of a crowd? Or that you might have an audience? Or have you ever felt like you didn’t want your lack of ability to show? If so, you have experienced this trap. Studies show groups with formal avalanche training take higher levels of risk when they run into other parties, whereas those with no training will actually expose themselves to less risk.
There are many other human factor traps. Get to know as many as you can, and learn to identify when they are occurring with you. Aside from knowing the common traps, there are other ways to manage human factors, including:

Choose partners thoughtfully. The more alike your goals and risk tolerances and the more open your communication, the more likely you are to make good decisions together.

Learn to recognize when you are uncomfortable with risk levels, be prepared to speak your mind and to listen to others when they do the same.

Aim for consensus decisions rather than letting strong individuals drive the decision-making process. Case studies have shown that groups of novices making decisions by consensus are actually safer than groups with more experienced members. This happens because more experienced groups may actually have poor avalanche skills, but are still allowed to take on a leadership role because of their greater experience.

Don’t be afraid of Plan B. Enjoying the backcountry is a lifelong process. Don’t cut it short for one powder run.

Jan Neuspiel is the owner/operator of Island Alpine Guides, lead avalanche forecaster with the Vancouver Island Avalanche Bulletin and the manager of Pantheon Heli Skiing. Neuspiel has created a trip-planning tool which can be used by anyone with basic avalanche training. Email info@islandalpineguides.com for a copy.