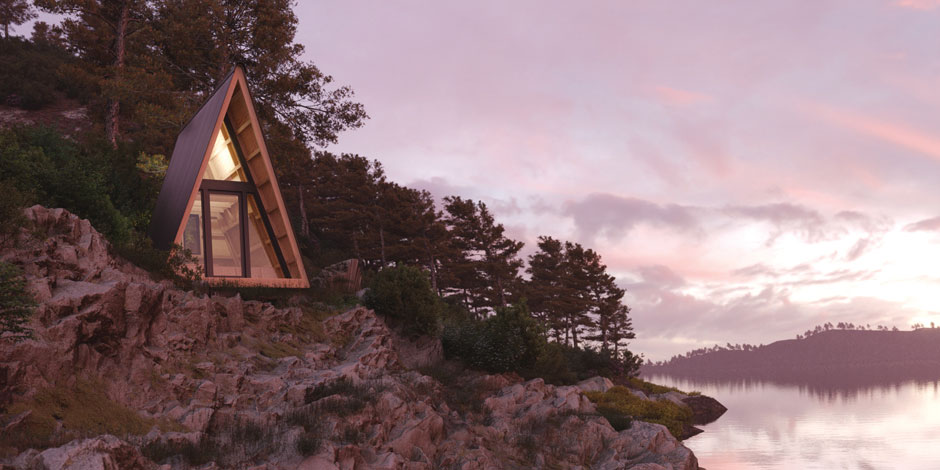 A BACKCOUNTRY, MODULAR ROOM OF ONE'S OWN

How one award-winning company is reinventing a classic design for modern adventurers.

Gaining popularity in the mid-1950s, the modest A-frame, with its inherently simple aesthetic, defined a way of life. Its silhouette is reminiscent of steep mountain terrain, or the peaked firs of a west coast rainforest. Its angular roofline seamlessly connects the earth to the sky, sheds snow in the winter, deflects offshore winds and foul weather, and provides passive cooling to the lower floor in the summer.

The low-cost A-frame allowed mid-century architects to experiment with form and construction. Its small footprint, ease of assembly, and affordability created communities of lakefront vacation homes and mountainside chalets. Prefabricated kits could be purchased through large department stores and, with a heavy investment of sweat equity, a vacation cottage could become an affordable reality.

The popularity of the archetypal A-frame peaked (pun intended) some time in the late ’60s. The iconic design that had once defined North American cabin culture now seemed dated. Commercial cabins and cottages with less dramatic roof lines became stylish. The concept of purchasing a kit home from Sears eventually fell out of favour, and homes and cabins dubbed “prefab” and “modular” were stigmatized.

Present day: due in part to the push towards sustainable architecture, design with smaller footprints, and zero-waste construction methods, prefabricated homes and cabins are again gaining traction. In 2015, BC-based business development specialist Wilson Edgar and architect Michael Leckie teamed up to launch the Backcountry Hut Company (BHC). Working with Comox Valley-based timber framer Cyrill Werlen of Cascadianwoodtech, the company began to produce easy-to-assemble modular structures for use in remote locations.

Only one year later, one of the company’s early designs won the prestigious Canadian Architect Award of Merit.

Wilson, who clearly has a soft spot for “cross-Canada cabin culture,” tells me that traditional building techniques create a complexity when raising a hut or a cabin in remote locations. BHC’s kits allow for ease of transport and assembly, even in off-grid applications where tools are powered by gas-fuelled generators and 18-volt batteries.

The emphasis is on reconnection to nature and providing a place for backcountry enthusiasts to decompress, off the grid. BHC’s designs feature modern architectural elements, recyclable building materials, and a smaller, functional living footprint.

Both Wilson and Cyrill believe in a European design philosophy that homes need not be built to North America’s 35-year amortization standard. BHC aims for 100% recyclability once the home reaches the end of its shelf life; the use of wood, matte metal cladding, and other natural products is a necessity for this sustainable vision. Flat-black siding and natural wood elements create a cabin that is both quiet in nature and pleasing to the eye.

BHC’s shell system allows for engineered 2’x10’ pre-insulated panels and the glue-lam timber-frame structure to be fabricated in a climate-controlled shop, which reduces exposure to the elements and minimizes structural inconsistencies. Another of their best practices is pre-milling forest materials to dimension in order to minimize waste.

Despite its fall from commercial grace, the A-frame is a sentimental favourite among #cabinporn enthusiasts. November 2019 will see the release of BHC’s Arrowhead shelter, a homage to Rudolf Schindler’s seminal design that started the A-frame vacation home movement in 1934.

In the debate on environmental stewardship, “sustainability” is a catchall, and the crux of its meaning is often lost. In my conversations with BHC, sustainability in the context of their product is about creating enduring architecture that is attainable, relevant in its design, and lasting in its workmanship.

It’s rather fitting that a company whose vision encompasses the values that led to the rise of the classic A-frame cabin would capture the essence of this nostalgic post-war design and remaster it for today. It’s a perennial design that embodies a vision of sustainability.