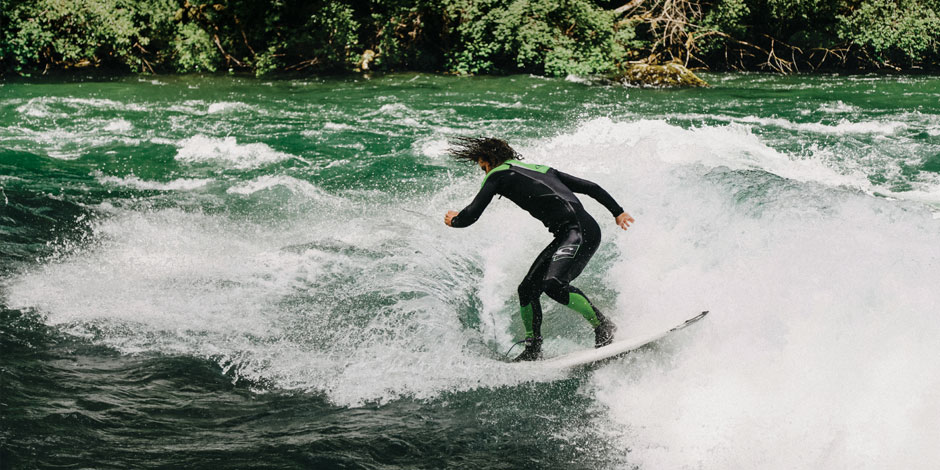 For a pair of spirited river surfers, a surge of excitement for ideal conditions quickly turns dangerous.

Despite living on the water in the Valley, you have few options for surfing and it helps to get creative. I met Nik Riley in high school. He has a stoked attitude and willingness to try anything. Among other things he’s an avid fisherman, surfer, and hunter, and one of the most capable people outdoors I’ve ever met. More than anything we loved to be in the water; we used to snorkel rivers at high flows just to see the fish, and over the years we noticed small waves that looked surfable. Still unsure if this was possible, we started on boogie boards. They were easy to manoeuvre in the rapids and you could beat them up on the rocks rather than risk damage to a thousand-dollar surfboard.

Years later, with the help of the legendary East Coast Surf Club, we found numerous surfable river spots. The semi-secret club has a near-religious enthusiasm fuelled by the novelty of surfing on the island’s east side. Newcomers must be approved by the council before eating a ceremonial pinecone while surfing naked.

There are a handful of river surfing spots on the island, but the wave we chose one day last December is by far the most consistent. It’s usually around chest height with a small, clean face and a bit of white water, making it really fun to surf. We’d never seen it like this though. It was massive, with a large, clean face.

But a storm had come in, causing the river to surge and send trees and debris downstream. A 150ft log got jammed to one side. Surfing it was dangerous because of the possibility of being pinned under by its branches.

Just catching the wave was no easy task, as we now had to skip over the spiked, gnarled tree to get ourselves in. At first we kept hitting our boards against it, which slowed us too much to catch the wave. We’d normally call it off at this point because of the risk. Unfortunately the wave was all time, and we couldn’t bring ourselves to leave empty handed.

We realized the best way to get in was to work our way onto the logjam and jump off into the wave. This worked surprisingly well the first few times. We both made it, safely riding the best river wave of our lives. Our confidence was turning into cockiness. We should have packed up after a few rides and considered ourselves lucky to get out unscathed. But instead we got greedy.

I stood on shore and watched Nik jump in as his leash tangled in the snapped branches. It rag-dolled him and his board underwater. It was impossible for him to reach the leash around his ankle because of the surging current. I watched him struggling underwater while his board hit the branches and broke into pieces. The stoke of surfing was instantly sobered by the sight of my friend, helpless underwater. I thought the only thing I could do was jump on the tree and somehow unravel his leash to send him into the rapids before he went unconscious. I scrambled to get onto the logjam as fast as possible, knowing that by the time I got there it might be too late.

Luckily the overwhelming power of the river snapped the cord, freeing Nik. He popped up alive and breathing, and made it to the shore with a limp and half a surfboard under his arm. I ran down to meet him and asked if he was alright. He said his ankle hurt.

What happened in a minute felt like an eternity. The surfboard, or what was left of it, looked like it had been in a knife fight. Wood and rivers don’t mix when it comes to safety; it was a humbling reminder of how insignificant we are to the power of Mother Nature, regardless of how comfortable we feel in the water.