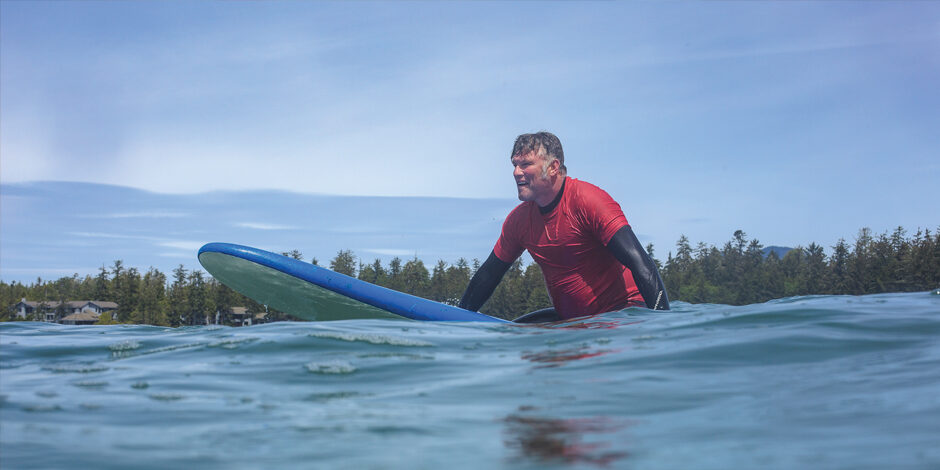 A LIFE LIVED WITH VOLUME

We dedicate this volume of the CVC to Thomas Dunn, who inspired family, friends, and entire communities to experience everything in a big way. He will be missed.

Everyone remembers the first time they met Thomas Dunn. He was a rare individual who made an impression—mostly positive, sometimes abrasive, always fun—with people he met.

Born in Wigan, England, Thomas came to Canada in 1990 to be a ski bum after serving in the British military for six years. He landed first in Jasper, Alberta, where he came to ski. It was there he met his future wife, Colleen. They soon moved to Fernie, BC, where they had two sons, Nik and Peter.

The Dunns made their collective mark in Fernie through skiing, mountain biking, trail stewardship, a family-run dirt-jump competition, deep friendships, and humour, before moving to Courtenay in 2013. Both the boys graduated from Georges P. Vanier Secondary School.

If you overheard Thomas in a Mount Washington lift line or swinging a Pulaski axe on a Cumberland trail-building day, you might think the Englishman with the unique accent was Scottish, or Welsh, or just plain loud. But in his heart, he was a Canadian. And proud to be one.

While in the military, Thomas was part of the Grenadier Guards, the soldiers with the tall bearskin hats standing outside Buckingham Palace who must keep a straight face no matter what you do to them. To those who knew him, that sounds impossible: Thomas, Colleen, and both their kids are well known for their joyful laughs.

They were also known for their willingness to try new things. Their zest. The family built a beautiful life centred around adventure. When Thomas passed away this past September after completing the West Coast Trail with Colleen, their shared adventure came to an end.

Judging by the stories I’ve heard and read since Thomas’ passing, he came into each person’s life in a manner that’s hard to forget. This is fitting. Because people who live as vibrantly as Thomas cannot be forgotten. They come in like a hurricane and leave with little notice.

If we can learn anything from Thomas, it’s to enjoy every little bit of this journey. Every powder turn. Every story. Every trail. Drink all the weird craft beers and eat all the hot peppers. Go on more trips. Spend the money. Love the ones who love us back and leave the rest in our wake. He gifted us with his joy, and we are richer for having lived in the eye of his storm, if only for the moments we spent with him.

Silver linings are for optimists, and despite his inability to suffer fools, Thomas was an optimist. He would want us—not just people he knew, but everyone—to keep on givin’ ’er.

Thomas, maybe more than anyone I knew, understood that all of this is one big cosmic joke. That this is all we have, and that we should soak it up with reckless abandon. Make it count. Thomas did.