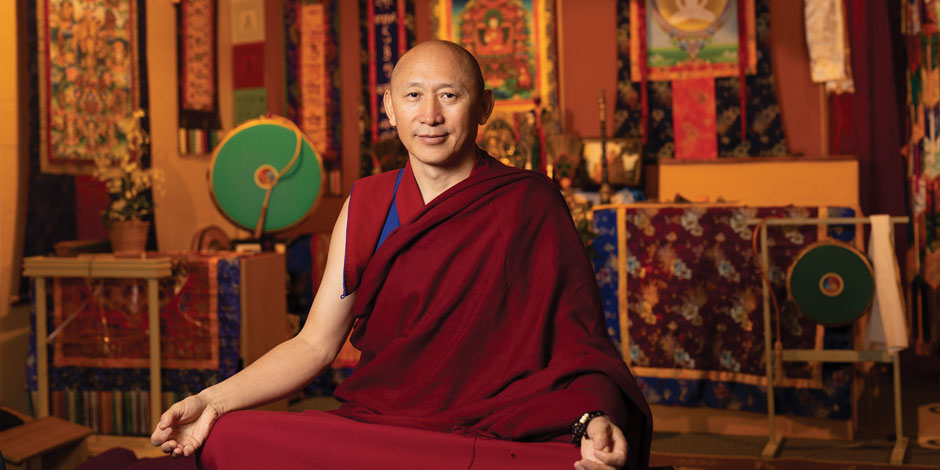 A LIFE THAT BENEFITS OTHERS

Now a permanent resident of the Valley, a Tibetan Buddhist monk has turned hardship into a teaching legacy.

The life of a Tibetan Buddhist monk is often assumed to take place in a remote monastery with complete detachment from the chaos of the modern world. When I sat down to speak with Geshe YongDong Losar (Geshela) at his home in Courtenay, I found that this isn’t always the case.

Geshela was born in 1969 in a small village in the province of Amdo, situated in the northeast corner of the Tibetan Plateau. Under Chinese rule, a life full of restrictions was—and still is—very difficult for Tibetan people.

“I was starving—hungry every day,” Geshela says of his early childhood. “There was no meat, no butter, no nutrition.” His father was in prison, and Geshela’s mother spent her days working for the Chinese government. At night, she would leave the young boy to look after his baby brother, returning with a basket of animal bones to smash and boil in water to collect the emulsified fat for cooking.

“At that time, I didn’t know what she was doing,” he says. “I didn’t enjoy it then. Now, later I’m thinking how hard it is to have kids and no food to feed them. In the daytime all the work. Running and running. Everybody works for government… There’s nothing for individuals. Everything is government work and they give you a percentage. Good workers get more, so people have to run.”

When Geshela’s mother died in 1976, family members arranged a secret gathering of monks to perform bardo ceremonies. As monks and villagers quietly gathered under the darkness of night, the young boy was profoundly moved by the experience. Paying close attention to one monk—not much older than himself—Geshela decided to become a monk himself. However, because he was only seven years old, his family objected.

At age 10, Geshela was sent to live and work with his uncle herding government-owned sheep. He spent three years riding a yak following 600-700 sheep in the Himalayas. For the first time in his life he was well fed, but nomadic life was dangerous. Despite the lack of socialization and the hard work in a cold and unforgiving landscape, Geshela is grateful for this part of his childhood. The work and solitude provided him with important lessons.

After the death of his maternal grandmother, Geshela’s desire to become a monk intensified, and his uncle gave him permission to enter the Bön Monastery in Tibet at age 13.

Bön is the oldest of five lineages of Buddhism practiced in the country. While other lineages have roots in India, the Bön lineage traces back to Persian and Afghan influences in Tibet. All lineages share similar teaching when it comes to mind training; the core difference with Bön lies in the external aspects that deal with the importance of the natural elements and our connection to nature.

For over a decade, Geshela lived at the monastery and studied intensely. Topics included chanting, cosmology, debate, grammar, logic, meditation, and poetry, along with traditional dharma teachings, sacred dance, and sacred musical instruments and rituals.

In 1992, at age 24, Geshe YongDong was awarded the Geshe Degree—the highest academic Tibetan Buddhist conferment. Shortly after his ceremony, he escaped Tibet with ten others, and it took ten days to cross the Himalayas into Kathmandu, Nepal, on foot. From there, Geshela traveled to Dharamsala, India, where he met with His Holiness, the 14th Dalai Lama.

He then studied at the Bönpo Menri Monastery in northern India, receiving in-depth, experiential training, along with spiritual blessing from some of the most respected masters in the Tibetan Bön tradition.

Geshela then studied at the largest Tibetan Buddhist university in southern India for three years, and accepted a teaching invitation in France in 1999. He has since taught at locations around the world.

Upon invitation from a friend he met in India, Geshela made his way to Canada. He focused on learning about western culture and traditions, and strengthening his English language skills, which he uses to teach Buddhist philosophy to students.

At the start of 2003, Geshela settled into the heart of the Comox Valley, becoming a Canadian citizen in 2007. He is the founder and spiritual director of Tibetan Bön Buddhist centres in Canada, Costa Rica, and Columbia, and has authored several books and papers in the Tibetan language, and one book in English titled Calm Breath, Calm Mind: A Guide to the Healing Power of Breath.

When asked why he chose Canada as his fixed address, Geshela’s short answer was “karma”.