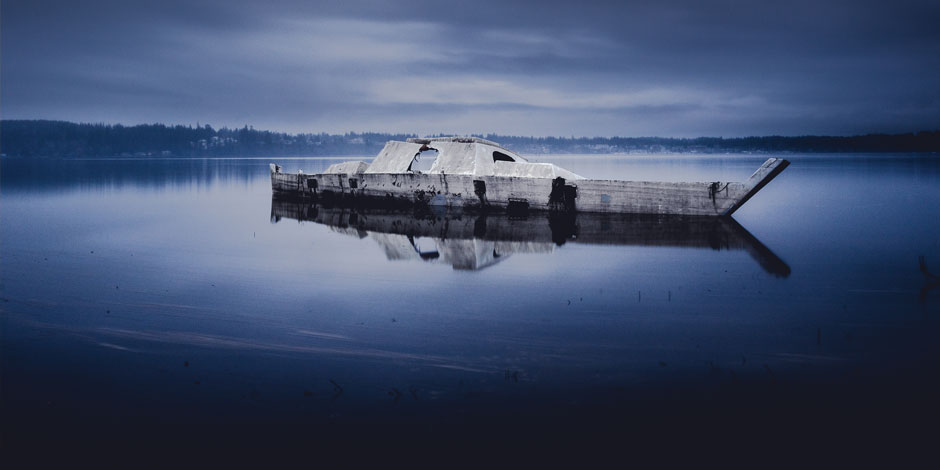 Orphaned by their owners, a number of derelict boats litter the shores of Comox Harbour. Due to murky jurisdiction and a lack of accountability, they’ll remain indefinitely.

At one time she was probably a sporty trimaran, moored inside Comox Harbour. Then, during a fall wind storm her buoy lines broke. She ghosted across the water and ran aground on the mud flats of the Courtenay estuary. Three years later, her name has long faded away. The double mast and one pontoon gone, she slowly disintegrates, an eyesore on the Royston Seaside Trail and to the waterfront homes nearby.

This is not a rare story. Around Comox Harbour alone there are at least seven abandoned shipwrecks. All are recreational boats that once sat at anchor but now rot on shore, leaking gasoline and other chemicals into the bay, chunks of their fibreglass and wooden structures beaching nearby. This story repeats itself across the BC coast and in harbours around Canada.

Regulations already exist that require owners to maintain their boats and clean them up if they run aground. But finding the owner of a boat, especially older ones that have changed hands many times, is often impossible. The boats moored in the Comox Harbour are rarely insured, and the cost of pulling a boat out of the mud or floating a sunken wreck often costs more than the boats are worth. Frequently the owner just walks away.

Transport Canada, the Coast Guard, and Fisheries and Oceans Canada share responsibility for dealing with derelict or abandoned boats. In theory, if the wreck poses a hazard to navigation or the environment, one of these agencies will deal with it. But with murky legal regulations, no dedicated funds to pay for the salvage efforts, overlapping jurisdictions, and unclear rules, the agencies rarely do.

For instance, a media advisor for Transport Canada wrote me in an email: “The federal government has determined that the boats currently wrecked in Comox Harbour are not obstructing navigation, nor posing a pollution risk to the marine environment.”

Robert Clarke, the wharfinger for Comox Valley Harbour Authority, laughs at this. After all, any boat has oil in the engine and bilges, fuel in the tanks, fibreglass in the hull, and possibly asbestos in the insulation. All of this ends up in the water when it’s wrecked. “You can’t tell me that isn’t an environmental hazard,” he says.

According to Lisa Geddes, the Executive Director of industry advocacy group Boating BC, the biggest problem is that there’s no way to dispose of an old boat before it becomes a problem. In BC it’s difficult and expensive to properly dispose of fibreglass. The presence of asbestos is even more onerous. Even without those issues it would cost more than $5,000 to take a small recreational boat to the dump, more than many sailboats would sell for. This creates strong incentive to sell or give away a boat, even one with questionable seaworthiness.

But Geddes stresses that the derelict boat issue is not just a recreational problem. Retired commercial vessels like tugs, ferries, and old fishing boats present larger hurdles. The Lorna Foss sank in Deep Bay, just south of the Comox Valley, in 2016. The previous owner of the tug said he sold the vessel to a Bowser resident, but the new owner never registered it. On the Fraser River an old BC Ferry, stripped of anything valuable, rotted on the owner’s private property. It threatened navigation and the environment, and was an eyesore to residents and recreationists. In both cases the government agencies wanted the boats cleaned up, but without the will of the owners, it is almost impossible.

“Even when they do know who the owners are, they can’t hold them accountable because they are not accountable boat owners,” says Geddes.

After years of lobbying from coastal communities, the federal government finally made changes to legislation and funding to try and address the problem. The $1.5 billion Oceans Protection Plan, announced alongside the approval of the Trans Mountain Pipeline in 2016, included $6.85 million for dealing with abandoned boats. By November 2018 the program had removed 38 boats nationwide at a cost of $546,721. Tougher ownership liability rules are in the works as well.

But Geddes says it’s not enough; to really stem the tide of wrecked boats and clean up the existing ones, Canada needs to look south.

Washington State cleans up dozens of abandoned boats every year and is now disposing of old boats before they become a problem. The key to the success of the Derelict Vessel Removal Program is a combination of “consistent funding and a dedicated, focused organization,” according to Troy Wood, the manager of the program. Annual registration fees ($1 per foot for commercial boats, $3 for recreational) plus money kicked in by Department of Natural Resources, funds the program. For the 2015-17 budget the two sources amounted to $2.4 million, enough to clean up 64 vessels.

They also have tougher registration rules. Similar to BC, every boat in Washington over 16 feet with a 10 horsepower motor needs to be registered, and new owners and sellers have five days to file the paperwork. But unlike BC, the registered owner, even if they sold the boat, is responsible for cleanup costs, creating incentive for registering every sale.

“The most effective program is probably the newest,” says Wood. The Vessel Turn-In Program pays most of the costs of disposing unwanted boats. “We’re seeing fewer reports of vessels sinking or beaching after big storms. I think that’s a major indicator that we’ve removed the high-risk vessels.”

Until Canada develops a similar program, Clarke doesn’t see much changing in Comox Harbour or anywhere else on the BC coast. “The derelict and abandoned boat issue is a complex problem with no easy solution,” Clarke says. “But other jurisdictions have figured it out. The only reason it hasn’t been dealt with here is because of a lack of political will. It’s time to act.”

Meanwhile, in Comox, the tide is high, the wind is blowing, and the trimaran is in for another beating.