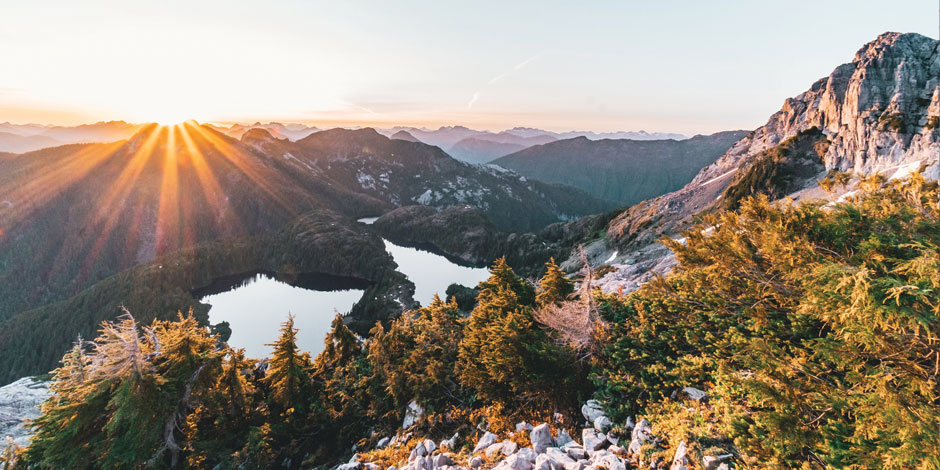 The Comox District Mountaineering Club is doing hard work on the ground, encouraging our community to enjoy and protect the great outdoors.

If you know what to look for, the signs of the Comox District Mountaineering Club (CDMC) are everywhere. A new log bridge near Indianhead Mountain. Brush cutting along the trail at Slingshot Meadows. A gnarled trail sign, weathered grey, on Mount Becher. Tent pads at Helen MacKenzie Lake, or flagging tape leading to Idiens Lake. Going back further, they even built some of the original trails in Paradise Meadows. When it comes to hiking and camping in the mountains above the Comox Valley, the CDMC are like magical elves, always hard at work but rarely seen. And they’re okay with that.

“The founding members of the club wanted to get more people out into the park,” says Juanita Wells, the CDMC’s President. “That’s still our mission. Having people hiking around, being out there, seeing how beautiful it is—it’s the only way they will value it enough to stand up for it and make sure it stays protected. Everything we do as a club is focused on that.”

Like a lot of people, Wells’ original interest in the club was personal; she simply wanted to go hiking more. She joined in 2010 and participated in organized hikes. Soon she was leading trips and volunteering on work parties, maintaining the trail, building tent pads, and more. “I just wanted to be out in the mountains as much as I could,” she says. “I’ve always loved the park. I wanted to see it looked after. Once I learned about the history of the club it all came together.”

The CDMC was founded as a non-profit club in 1927 by people whose names are now synonymous with the Comox Valley and Strathcona Park: Sid Williams, Clinton Wood, Jack Gregson, Dick Idiens, Geoff Capes, Eugene Croteau, and a little later, Ruth Masters. Early on they focused on the Mount Becher area, near the abandoned Forbidden Plateau ski hill, mostly in the winter. They built a cabin on the shoulder of Mount Becher, and on Friday nights they’d climb up from the old Bevan townsite and ski, snowshoe, and toboggan all weekend.

To get to the same lakes and mountains when the forest wasn’t covered in snow, they had to build trails. Gradually they pushed from the Becher area deeper into Strathcona Park towards Mount Washington. (Prospectors and guiding outfits also built some of these trails.)

“When there was somewhere new they wanted to go, they’d just build a trail,” says Wells. The free rein on trail building eventually fell out of favour with logging companies and BC Parks policy. But by then the club had established trails to the Comox Glacier, Century Sam Lake, and many lesser-known spots in and out of the park. They were also the stewards, clearing deadfall, cutting back brush, and building bridges.

And stewards they remain. A few years ago they signed a volunteer agreement with BC Parks so they could continue to maintain park trails. They have similar agreements with timber companies for the trails outside of the park.

I enjoyed some of their anonymous work early last summer. Two friends and I were running the Forbidden Traverse, a trail connecting Paradise Meadows and the old Forbidden Plateau ski area through a chunk of Strathcona Provincial Park. The path was in good condition until we turned off the Kwai Lake loop, which is actively maintained by BC Parks, and onto the spur heading east. Within a few hundred metres we were swimming through sopping undergrowth overhanging the trail. We could barely see our feet. A few kilometres later, just as suddenly, the trail appeared. Someone had schlepped their tools to the middle of nowhere to cut back the undergrowth. Later, we crossed creeks on new bridges and saw signs of fallen trees that had been cleared off the path. I later learned that several CDMC volunteer parties had done all the work.

“Their name is all over the park,” says Andy Smith, Strathcona Park area supervisor for BC Parks. “They do such a great job.”

Smith says BC Parks and its maintenance contractor are only able to maintain the most popular trails (and even here, CDMC often lends a hand). For the remote, hard to get to, and less popular trails, the club is all that’s keeping the trails from disappearing into the rainforest. “They fill in the gaps and get to the spots we can’t,” he continues. “And they never ask for anything.”

“There’s a satisfaction in keeping these trails open,” explains Wells. “They’re part of the club’s history and I like looking after the park. I can’t walk past a puddle on the trail without thinking about how we could fix it.”

Today, trail maintenance is only one of the club’s four interrelated goals. The others are to promote conservation of parks and protected areas, teach outdoor education and leadership, and organize guided hikes. Mostly they organize club trips—hiking during the summer and snowshoeing in the winter. Just as the founders intended, the idea is to get people exploring the mountains safely with others. Through these trips, newer members learn stewardship, education, and leadership almost automatically.

Introducing the park to new hikers is one of the things Wells enjoys most about the club. “A lot of our new members didn’t grow up hiking and camping,” she says. “They have a lot to learn. Being out there with a good mentor can be a phenomenal experience.”

Experienced members of the club lead every trip, and they range in difficulty from easy to challenging—day trips to multi-day backpacking. Weekly during the summer, the options range from a day hike to Croteau Lake to a three-day trip up the Comox Glacier.

“It’s those opportunities that drive membership. Right now there are about 150 people in the club. The number fluctuates with logging activity,” Wells says, explaining that the CDMC has an agreement with the timber companies and the necessary insurance to access private timber lands behind locked gates. When the timber companies limit access to the logging roads along Comox Lake, and thus to the trailhead for Comox Glacier or Century Sam Lake, people will join the club just so they can get into those areas.

Membership fees help the club pay for insurance and access permits. Most of the trail maintenance costs come out of pocket, though BC Parks has provided funding for gas, equipment, materials, and transportation through the Park Enhancement Fund over the last couple of years.

“Our original equipment was 15 years old,” says Wells. “It was pretty worn out. The money makes a big difference.”

Wells is telling me all of this from the new campground at Croteau Lake in Paradise Meadows. Built by BC Parks in 2017, the reservable site is for organized groups and consists of a number of tent pads, an outhouse, a bear cache, and a yurt-style cooking and eating shelter. Wells is volunteering as camp host for the weekend. It’s a BC Parks gig, not CDMC related. She says it’s just another excuse to spend more time in the park.

Still, the CDMC’s fingerprints are all around her. The club helped with constructing the campground, including building a deck on the yurt and the tent pad for the camp host last fall. As we speak, Girl Guides are running all over the deck, which makes Wells smile with pride.

“We are not just another hiking club,” she says. “It’s not just, ‘let’s hike there, let’s climb that’. We look after the park. We contribute to its protection. We make it possible for other people to get out there. I like to think that makes us different.”