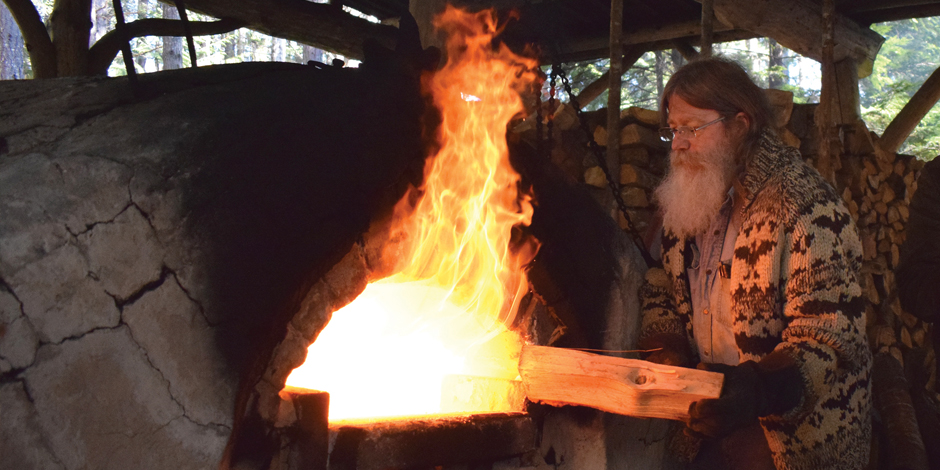 Award-winning potter Gordon Hutchens may be in his seventies, but he’s still got plenty of clay to shape, students to teach, and ideas to pursue.

“I take a lot of my inspiration from the natural world around me,” says Gordon Hutchens, Denman Island’s soft-spoken, shaggy-bearded master potter. “The ocean, the rocks along the shoreline, the changing weather, the forest, the moss growing on the trees, the lichen growing on the rocks; some of those little micro and macro things influence the crystalline-glazed porcelain I make.”

The 70-year-old potter has contributed to Canada’s fine art scene for over five decades, and his legacy is likely to carry far into the future.

In November 2019, the BC Achievement Foundation recognized Hutchens’ career with the prestigious Carter Wosk Award for Applied Art and Design, naming him its 2019 Award of Distinction Laureate.

From museum-quality pieces (his work is displayed in permanent collections such as the Bronfman family’s Claridge Collection, the Art Gallery of Greater Victoria, the Burlington Art Centre, and the Canadian Museum of Civilization) to functional pots, vases, platters, and mugs, his talent with colour, texture, and form is evident.

But his influence on a new generation of potters is equally significant. He is a mentor to fellow potters and has been a ceramics program instructor at North Island College’s School of Fine Art and Design for more than two decades.

“When I came to Canada, I had to have a job while I set up my studio, so I taught. I found I actually enjoy teaching a lot. Now it’s kind of a decadent pleasure. I don’t teach to support my pottery income—I support my teaching habit by making pottery.”

Arriving as an American conscientious objector to the Vietnam war, with an honours degree in Fine Arts in hand, he started an idyllic life on a rural island (off another island, no less), making a living by throwing pots in his hand-built cabin, down a fern- and fir-lined gravel road.

Hutchens was part of the original movement of potters who arrived on Denman Island in the 1970s.

“By 1973 there were eight of us. We shared use of a large clay-mixing machine and placed collective supply orders—they sent up a flatbed truck directly to Denman Island and to each studio to unload.” Today, the island has more than 30 potters, and many still work together to coordinate the annual Denman Island Pottery Tour each May.

Hutchens sees himself as both artist and scientist, saying, “I do all the chemistry in the background. It takes years of tests and developments to do these things.” He mixes his own clay blends and uses a broad range of techniques like raku and salt glaze stoneware. He creates unique glazes, including one called Denman Lustre, which came about, he explains, “so that a piece can look as though it could be very ancient but, at the same time, very contemporary—timeless.”

Beyond the glaze’s chemistry, the firing process affects the final outcome. “Subtle differences in the action of the flame can make a dramatic difference in the character of the glaze—where fire tells a story. I get excited by the power of heat, the way fire brings about the transformation, the metamorphosis of elements I’ve combined into something new.”

In 1998, Hutchens’ passion for fire, art, and Japanese culture led to his building a traditional hillside Tozan-style Anagama wood-fired kiln to produce unique finishes that are unattainable in an electric kiln.

Twice a year he lights the kiln for his students and dozens of BC potters who travel to his 19-acre property with their pots and tents in tow.

Made from 3000 firebricks, the kiln holds hundreds of pottery pieces, burns for three days straight—using five cords of wood that the potters hand-feed in shifts—and reaches up to 2350°F (1300°C).

“Inside the kiln, a river of flame flows through the pots, caressing each, leaving behind a layer of ash that melts, creating unique colour effects,” says Hutchens. “Outside, a flow of camaraderie and hard work binds together individual artists in a common goal.”

Black Creek potter Charlotte Schaufelbuhl has attended the outdoor firings for many years, and still takes classes with Hutchens, even though she has 40 years of experience of her own. “I’ve always admired his work and his years of experience. As a teacher, he’s so patient and supportive.”

Both a traditionalist and a trailblazer, Hutchens will continue creating and teaching for as long as he can.

“When I see the excitement in students, at the end of the day I am exhilarated, not exhausted. I’m still excited every day when I go to work. There’s a limitless amount of things that I still haven’t done and that I hope I have enough time left to achieve.”