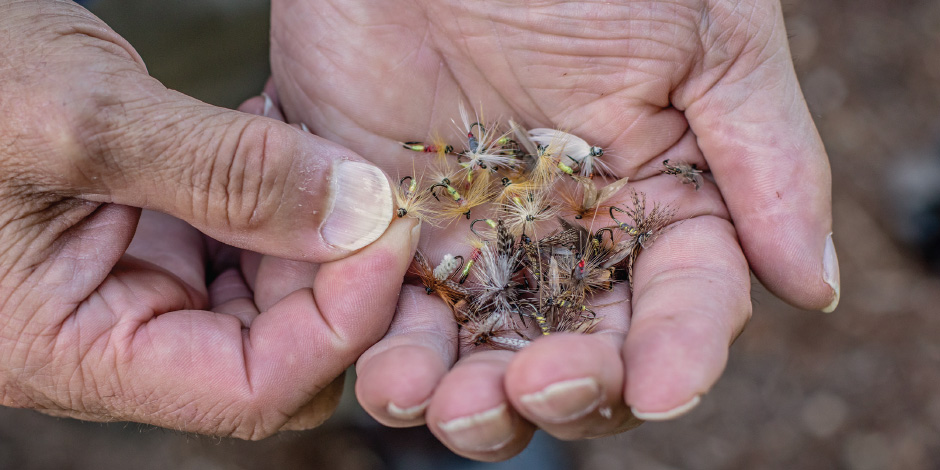 Angling For More Than A Fish

My earliest memory of holding a fly rod was on the Cowichan River, at the age of seven, in April, with a lively 2-pound trout dancing at the other end. My father had been invited to drift the river with a friend, and had decided that I was going to be his fishing partner that weekend.

To say it was a life changing event would be an understatement. It was the beginning of a journey that has taken me to beautiful places, grown a love of nature, helped me develop as an angling historian, and has been instrumental in forming lasting friendships with wonderful people. When I reflect on my years of being an angler, I find that, like a river, it has followed a meandering course that has touched on many different aspects of my life.

You can never be 100% prepared when exploring a stretch of water with a fly rod. In many ways, that has always been one of the reasons I have been drawn to the sport. There was the time when casting a fly over a small school of Coho near Miracle Beach, 20 feet in front of me, a large spring (Chinook) salmon surfaced in slow motion before sinking below the surface. I made a quick cast a few feet ahead of the fish. Stripping the line in quickly I felt it tighten, then slowly but deliberately roll off the spool of the reel picking up speed as the Chinook swam towards Lund. With no control over the fish, the line went slack, as the barbless fly had simply popped loose when the salmon shook its powerful head. Relief followed disappointment, as the thought of losing a fly line over a fish seemed to outweigh the remote possibility of landing the Chinook without harming it. I resumed casting for my intended quarry with a chuckle.

However, surprises on the river are not always large fish. I remember fishing a local stream in late spring for Cutthroat trout and perhaps the odd Steelhead. It was one of the first warm days of spring when the dogwoods are in bloom. By mid-morning I found myself taking off my fleece and feeling the warmth of the sun on my shirt. I had fished upstream to the start of a short section of canyon water; from there, I looked out over a long pool with a deep undercut bank on the far side.

It was a perfect place to have a quick lunch and a cup of tea. As I sat, I was interrupted by a mother otter and her family of pups showing up for a morning romp in the river. From my vantage point they seemed unaware, or simply careless about the lone angler having his lunch, and carried on with their otter play and chatter.

One evening, as my nephew Michael and I cast our flies over a seemingly empty ocean in search of a salmon, a pod of Orca swam past us, headed north to more fishy waters. The whales swam by so closely we could hear the sound of the air pressing through their spouts. With the sun disappearing behind the Beaufort range it seemed a beautiful way to end a fishless day, and perhaps an indication that the salmon were swimming in other waters.

As my father introduced me to fly fishing, I too, have shared my love of the sport with my nephew. My father learned about angling through my grandfather, a WWI vet born in the latter part of the 19th century. I only met my grandfather once, but, through my father’s love of angling passed down to him, I feel connected to my grandfather. This connection is now being passed down to my ten-year-old nephew, who, like his ancestors, shares a deep love and respect for our angling traditions. Some of my favourite recent memories of fly fishing have been spent with three generations of Armsteads on the banks of the Puntledge River and other local waters.

Though fishing partners need not just be family. Over the years, I have developed close friendships based around the common bond of fly fishing. As fly fishing is a contemplative sport, as opposed to a competitive one, I have found the most enjoyable fly fishing friends are those who share those same sensibilities. Knowledge of the sport is not necessary and sometimes the most enjoyable days on a riverbank are spent acquainting a friend with the art of fly fishing. In an era where communication frequently occurs online and through electronic devices, it is refreshing to know that shared knowledge with a fellow angler on the banks of a stream is still the best way to learn about local waters and techniques.
My passion for fly fishing extends beyond the river, to learning more about the history of the Comox Valley and the people who fished here before me. A few months ago, I was devouring the book Ginger: The Life and Death of Albert Goodwin by Susan Mayse, in which she describes Ginger’s devotion to angling.

I soon found myself in the Cumberland Museum looking at his rod, which would have been among his most prized possessions. It’s a beautiful split cane fly rod and, although it is now reel-less, I like to think there was once a beautiful old Farlow’s or Hardy reel that balanced it complete with a wallet of old salmon flies.

Ginger would have spent what little free time he had fishing some of the same stretches of water that I find myself drawn to today. The Cruickshank River—a quality trout stream in its day and the focal point of some of the larger runs of steelhead and salmon—is one of the areas where he spent much of his time. Today the river is closed to angling, damaged from years of abuse from logging and the hydro project in the watershed. Near to where he was murdered, I like to think that in the days leading up to his death, he was able to cast a dry fly for trout and, for just a moment, find some temporary peace while his fly danced upon the surface of the water and a trout swirled below it.

It is the latter part of the summer as I write, and the earliest trees are just beginning to change colour. Fall is not far away and there are pink salmon showing up at our local beaches. My nephew is staying over and we plan to make a few casts off a local beach in search of a pink salmon or two. I was up late last night tying flies and stuffing our fly boxes with new inventions to try out today.

The fishing has been slow but you never what will happen, so that is why we are going today and well, maybe even tomorrow.

There are many places to fish in and around the Comox Valley. Cast your luck at some of these locations…

Maple Lake is stocked with Rainbow and Cutthroat trout. This is a great urban fishery and the perfect place to cast a fly near town.

Comox Lake is moody and unpredictable, yet still holds some beautiful Cutthroat and Rainbow trout. Often the angling is more about the gorgeous scenery than the fishing so this remains one of my favourite places to fish.

In Ginger’s time the Puntledge would have been full of large runs of Chinook Salmon, Coho, Steelhead and trout. Today, although the runs are diminished, the river still becomes a focal point for our communities when the Chum salmon show up on their annual spawning run. These fish readily take the fly and anything flashy, and green or purple usually triggers a committed response from them. Fly patterns to consider would be an egg sucking leech, popsicle, or an intruder style pattern. When fishing for Chum in the river always consider the tides, as they will bring fresh fish into the river.

From Salmon Point to Gartley Point and all stops in between, our region has many excellent beaches to fish from. In late summer, our beaches become the staging grounds for Salmon headed back to local rivers. Beginning with Pink Salmon and then Coho and Chum salmon, casting flies from shore to these powerful fish is a wonderful fall pastime. Unpredictable, a beach full of hard biting salmon one day will be devoid of them the next. A simple rule of thumb: if you see fish rolling, start fishing; if not, move on. Patterns to have in your arsenal include California Neals, Clouser Minnows, and Mickey Finns. 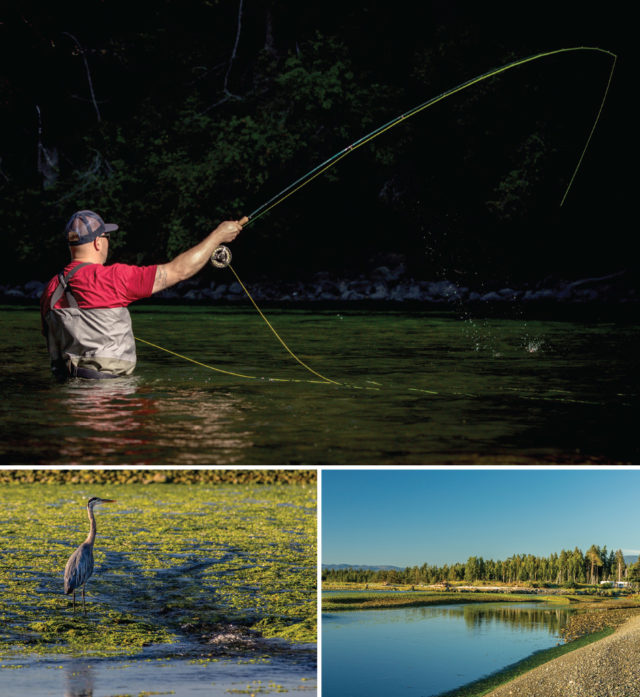