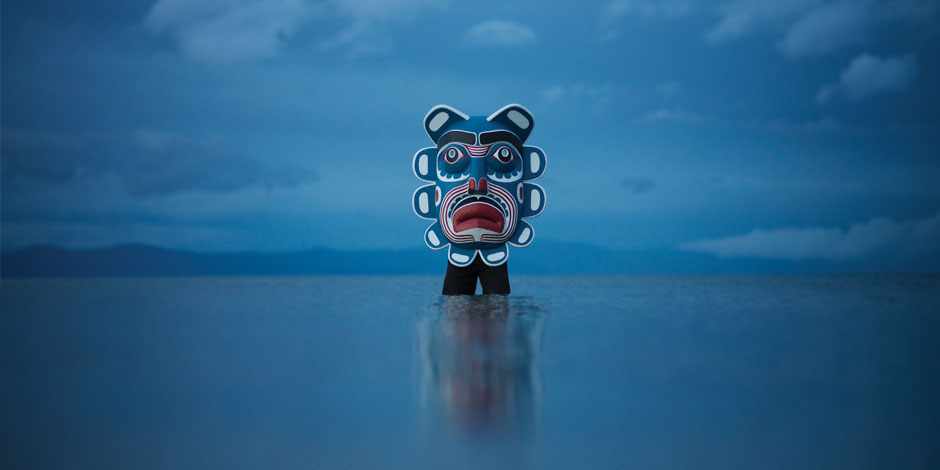 The original underwater superhero swims the waters of the Pacific Northwest.

His name is Kumugwe (pronounced “koo-moo-gwee”). He lives in a mansion made of precious metals, is revered as a god, and can control both the tides and the riches washed up on beaches. Celebrated throughout the Pacific Northwest, but mostly adored in Comox Valley waters, Kumugwe is known as “The Copper Maker” by Kwakwaka’wakw and Nuxalk indigenous First Nations. His name translates to “wealthy one”—like any self-respecting sub-marine deity, Kumugwe keeps his abode filled with riches. He is master of the seals, a fitting tribute considering the rich, healthy populations of seals and Steller sea lions in the Salish Sea. Mythology states that the posts and beams of his house are living sea lions.

Masks of Kumugwe carved by traditional First Nations often show him with sea creature attributes like large, round fish eyes and gills at the corners of his mouth. He’s also shown with fish and sea birds around his head, or the suckers of an octopus. He is closely aligned with totemic animals such as loons, seals, sea lions, octopuses, orcas, and sculpins.

Kumugwe is responsible for the rising and ebbing of the tides, as well as that which is claimed by turbulent sea weather, be it material goods or human lives. Think of him as a First Nations Davey Jones or Poseidon. Mythology says he has a unique power to see into the future, heal the sick and injured, and bestow powers on those he favours. Allegedly, there are stories of heroes taking on quests to discover his undersea kingdom, with the goal of being rewarded with undersea wealth and magic.

The symbolism of the underwater man of mythology to First Nations is readily apparent. The Bighouse on the traditional territory of the Komoks First Nation bears Kumugwe’s name. Named for the Bighouse, Kumugwe Cultural Society aims to “preserve, promote, and advocate for cultural activities of the K’omoks people.” The Kumugwe Dancers were formed in 2001 to preserve the cultural traditions of their ancestors. In 2017, the Cumberland Museum opened the Kumugwe Exhibit, featuring a large mask carving of Kumugwe by Karver Everson.

When you consider the vast quantity of sea lions swimming gracefully in local waters, weaving in and out of salty caves, dancing like queens and kings in the beautiful waters of the Salish Sea, it makes you wonder if Kumugwe was actually king, or were the sea lions themselves the rulers? The oceans surrounding Vancouver Island are opulent and ethereal. They hold a treasure trove of stories and mythology throughout cultures, and attributing magic to the tides that surround us hardly seems like a stretch.