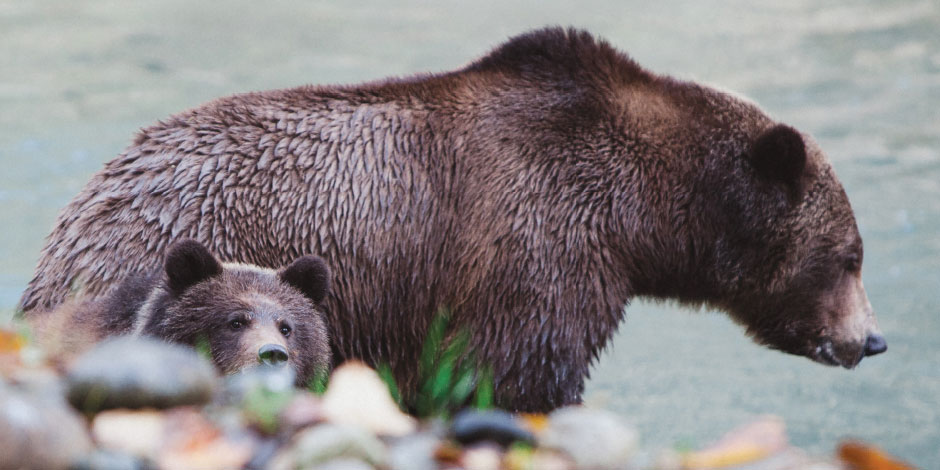 Just across the Salish Sea, only 70 kilometres from Campbell River as the crow flies, the Xwémalkwu (Homalco) people share the land with dozens of grizzly bears—and awe-struck visitors.

On a late October day, a pale sun shines through sparse golden leaves, making sparkles on the Orford River. I know there are four grizzly bears just across the water from where I stand, because I saw them seconds ago. They are less than a hundred metres away. Now the bears—one solitary male, plus a mother and two hefty cubs—have moved into the underbrush and are almost completely invisible unless you know where to look.

Fortunately, these bears aren’t very interested in the group of wonderstruck humans across the river. They’re focused on finding the last remaining salmon of the season. We’re almost close enough to hear the chomping of a male as he devours the fish he caught a few minutes ago.

The Orford River, located within the traditional territory of the Xwémalkwu (Homalco) people, provides an ursine all-you-can-eat buffet between August and October every year—and a uniquely First Nations travel experience has risen out of it.

Led by our Homalco guide, Janet Wilson, our group has seen animals, landmarks, and cultural sites through an Indigenous lens since leaving Vancouver Island aboard the Pacific Seeker earlier this morning. Within 15 minutes, we get our first thrill when a large humpback surfaces near the boat. It flashes us a view of its wide, sleek tail before vanishing into the watery depths.

Near the entrance to Bute Inlet, we idle offshore near Church House, an abandoned settlement that used to be the main village for the Homalco, with many homes, a wharf, and a sizeable church. Janet remarks that her mother was born here: “As a little girl, she was afraid of the bears at night, so my grandmother would sing her a lullaby to help her fall asleep.”

Tragically, Janet’s mother, like so many other First Nations children, was sent at a young age to a residential school. Now, Janet’s generation is focused on a revival of the culture and language that were forbidden to previous generations. There are plans to set up a new wharf here, a youth cultural camp, and potentially even accommodations so the Homalco can provide an immersive cultural experience for visitors like us.

As Janet talks, the sun burns through the heavy fog, and blue skies emerge. The incredible landscape of Desolation Sound Marine Park surrounds us in a chilly embrace us as we leave behind the ghosts of Church House and make our way into Bute Inlet. For hundreds of years, the Homalco lived along this spectacular 70-km-long fjord, travelling to different sites by canoe and on foot as the seasons changed.

Pretty Orford Bay, where we land, was a gathering place for fishing and berry picking. Today, it houses the salmon hatchery, a logging operation, and the bear tour visitor centre. We pile into a van and bump along the rough roadway, passing colourful hand-carved signs depicting local animals.

Suddenly, our first bear! He’s sitting up in the water, looking frankly adorable. He gives us no more than a passing glance before heaving himself to his feet and waddling further down the river. We get out of the van and watch for about 15 minutes as he wanders through the water, dunking his head in search of fish, clambering clumsily over several logs. Once he’s out of sight, we move on to a viewing tower (amazing scenery with circling ravens and eagles, but no bears) and a bridge, where a group of chum salmon wait in Zen-like silence for some inscrutable signal to proceed.

We stop again on a small bank above the river. After a few minutes, a mother and two cubs come into view, moving smoothly through the water towards us, seemingly intent on fishing. Suddenly they’re climbing up the bank right near us. They’re this close—only a few metres away. We quickly scramble back into the van and slam the door, adrenaline soaring, laughing with exhilaration.

Later, we see the trio approaching the lone bear who’s eating his salmon. We watch, transfixed, as the mother unknowingly leads her babies closer to him. Will there be a standoff? Not today. Mom and the cubs finally notice him, keep a respectful distance, and eventually walk away. Now it’s time for us to leave, too.

Although we don’t know it yet, we will get to see harumphing sea lions, swooping sea birds, seals, and another humpback, along with more gorgeous scenery, on the way back. As we go about our regular lives, a spark will remain in us from the day we connected with the bears and people here, and the river that keeps flowing across the Salish Sea. 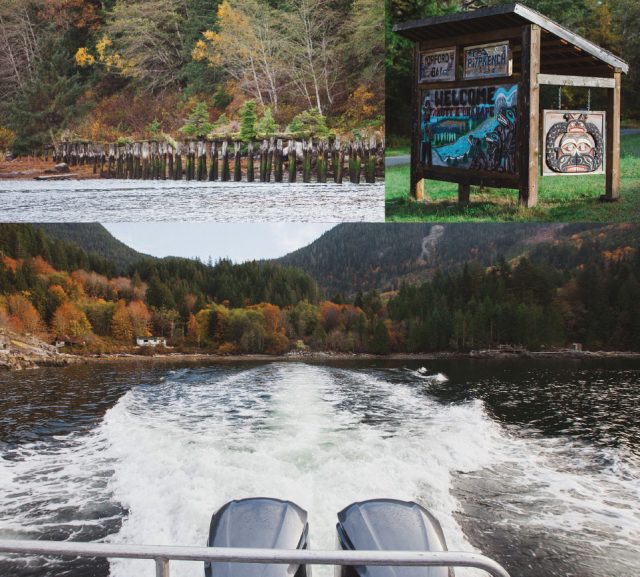