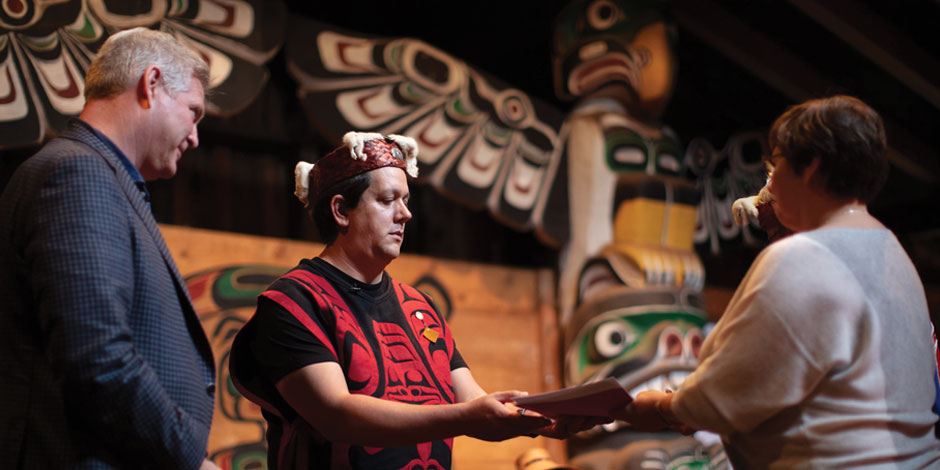 A meeting of art, reconciliation, and the law in the K’ómoks Bighouse.

History was made recently at Kumugwe, the K’ómoks Bighouse. On October 16, 2019, a ceremony was held marking the “first time in Canadian history that a federal Crown Corporation has ratified a legally binding contract through Indigenous traditions‚ in a process that has attracted interest from legal and cultural communities, Indigenous peoples and academics all around the world.”*

Carey Newman (Hayalthkin’geme) is a Kwakwaka’wakw and Coast Salish artist, master carver, and the creator of a two-metre-high, 12-metre-wide art installation titled the Witness Blanket. It is made entirely from donated materials left behind from Indian residential schools across Canada.

After Newman had completed the Witness Blanket, the Canadian Museum for Human Rights (CMHR) recognized its national importance and approached him about acting as caretaker for it. Since hundreds of thousands of visitors make their way through the CMHR each year, Newman saw this as an opportunity to have the message of the Witness Blanket widely shared. But he did not want to use the usual contractual model for transferring ownership of the work to the museum, which would effectively end his relationship with the piece.

Over many months, and with the involvement of others, he co-drafted an agreement using Kwakwaka’wakw law. The blanket is considered to be alive, and as a legal entity it is a party to the agreement, along with Newman and the CMHR. The agreement, like treaties historically signed in other parts of Canada, is to be seen as a “marriage” rather than a “divorce”—the beginning of a formal relationship, not the end. It should be revisited in an ongoing way and the terms can be adapted as needed. Unlike many standard contracts, it is not a permanent transfer of property.

The Witness Blanket itself is not your typical blanket. “It is alive,” says Newman, “it has spirit.” The blanket tells the story of the residential school era (1870s-1990s), when Indigenous children were removed from their homes, often forcibly, to attend institutions established by government officials who believed the solution to the “Indian problem” was “to take the Indian out of the child.” Inspired by his father, a residential school survivor, Newman and his team spent a year travelling across the country, visiting 77 communities to hear stories of survivors and ultimately gathering 887 physical pieces of history from those affected, and from former residential school sites. He then had the task of figuring out how to bring it all together from the basement studio of his Victoria home.

Looking closely at the Witness Blanket, you’ll see many different materials, including pieces from the buildings, disciplining implements, equipment from popular games, a cut braid of hair, and clothing. The piece weaves a complex image of this difficult period of Canadian history. In Kwakwaka’wakw and Coast Salish cultures, blankets are a symbol of protection, warmth, and caretaking. The Witness Blanket recognizes the effects—and ultimately the failure—of this attempt at cultural genocide: Indigenous peoples remain full of strength and vitality despite residential schools.

I attended the ceremony ratifying the written agreement for the caretaking of the Witness Blanket at Kumugwe. If you ever get a chance to attend a ceremony in a Bighouse, you will understand why the Canadian government banned Indigenous ceremonies from 1884 through 1951. The Bighouse, with its grandeur and the important business carried out there, would have been seen as a competing system of power to colonial rule.

Since the ban was lifted, the Bighouse has returned to its rightful position as a place of authority and order. It is a place where laws are created, restated, and lived. Wealth is redistributed. Individuals receive names. Families hold one another up and correct what must be made right. Ancestors who have passed on are honoured. Guests are cared for. Cleansing, mourning, celebrating, and learning occur.

Inside the Bighouse, a beam of daylight streamed through the opening in the roof above the fire. There were dances, songs, speeches, stories, laughter, and tears. The senses were heightened through the performances. Art and aesthetic were central to pulling the participants into the ceremony. At one point after the signing, we all got up and danced around the fire in celebration.

As the event progressed, three parts stood out to me. First, the importance of place. So often, when Indigenous peoples participate in legal proceedings, they are held in Canadian institutional spaces, removed from their own community life. In the Bighouse, the power is shifted back to Indigenous peoples.

Second, the gifting and feasting. In Indigenous tradition—in stark contrast with the materialism of mainstream society—the sign of a wealthy person is not how much you keep, but how much you give away. We feasted on freshly harvested mushroom soup, salmon, elk, greens, and oolichan grease, and at the end of the ceremony, Newman and his relations handed out many gifts to each of us in attendance, including a woven blanket designed by Newman to commemorate the Witness Blanket.

Third, I brought my then six-month-old baby to the ceremony, though I had worried she might interrupt the proceedings. Then one of the witnesses told us that babies’ noises during ceremonies are considered sacred, because it means we have children with us to learn and grow up in the teachings. Multiple times throughout the ceremony, people talked about how we were doing the work in the Bighouse for the young ones, and the unborn generations.

The Witness Blanket may tell the story of a time when our children were taken away from us as Indigenous peoples, but our children’s voices are coming back stronger than ever. Through the gifts I took home from the ceremony, I am reminded daily of the resilience of our ancestors, the healing we are currently experiencing, and the great work we have yet to do to prepare a good place for future generations.

Lindsay Keegitah Borrows lives in K’ómoks territory, and is a member of the Chippewas of Nawash First Nation.

PHOTOS BY DOUG HARRINGTON/MEDIA ONE 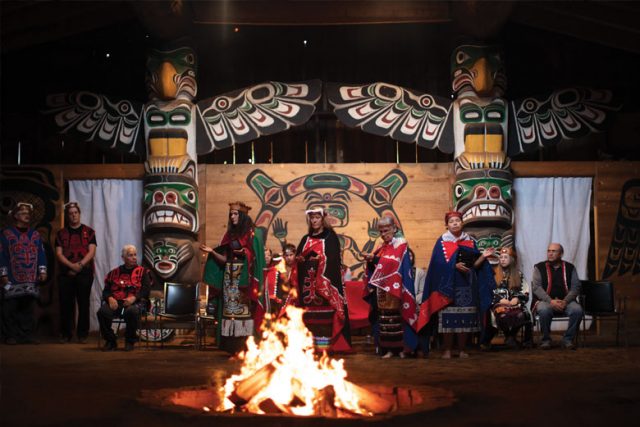