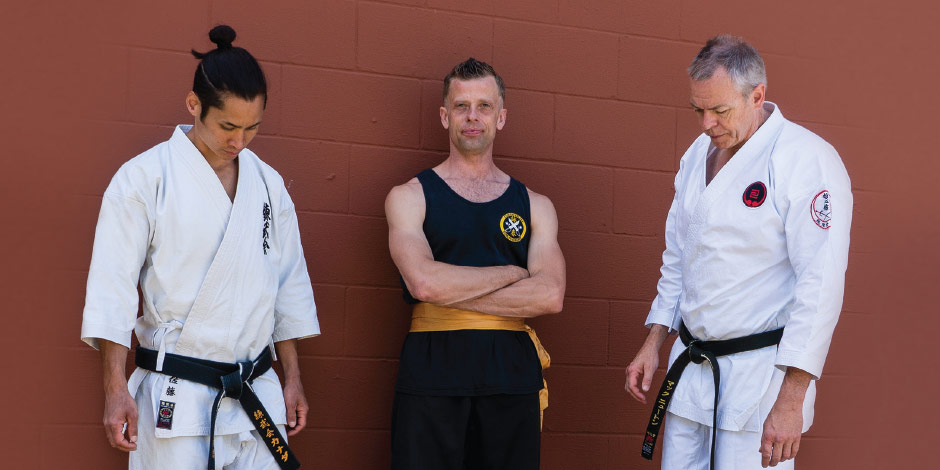 Branches of the same tree, nurtured by roots from the same source.

While many people see no connection between traditional martial arts and yoga, the tree metaphor is an apt and meaningful description of the relationship between the two disciplines for three local martial artists and yogis: Sifu Corny Martens, Sensei Jared Sato, and Sensei Mac Newton.

As a child, my values around fairness and justice were developed through sibling rivalries with older brothers and standing up against school bullies. As a young adult, I found a Wing Chun Kung Fu teacher who helped me to use my skills to end violence and approach situations from a place of compassion. When I first began practicing yoga, I became aware of the instabilities in my martial arts training. The teachings of yoga strengthened and transformed my kung fu practice.

The term peaceful warrior relates to both yoga and kung fu. In martial arts, we practice empty mind training and the same is true in yoga. The empty mind, empty body path to receiving energy leaves one receptive, open, and able to take in the lessons; it requires presence in posture and breath. With yoga, one learns to reach and expand through a series of postures. In martial arts, one learns to be centred while someone attacks you physically. Both force us to expand awareness and, from our breath, draw an ability to be ever-present.

Martial arts and yoga require us to be present; they equip us with the ability to meet daily challenges head on, and to recover; they allow us to care for ourselves and those we care about.

Inspired by the fantastical fighting abilities of ninja and kung fu masters, I entered the world of martial arts when I was seven years old. Later, enticed by the shapes and knots I could make with my body, I explored yoga. At first, drawn to the physicality of each, I began to realize there were limitless layers to unfold as my practice deepened. Initially, I wondered how I could reconcile practicing both. Are martial arts not about effectively dismantling an opponent? Is yoga not about peace and compassion? Was one not hard, the other soft? Yang versus yin?

At a glance, martial arts may appear steadfast and outward and yoga more yielding and inward. When studied, each reveal balanced external and internal qualities. We also find similarities: stances and postures; kata and vinyasa; and ki and prana. The precise, definitive movements of a skilled martial artist are not unlike the graceful, flowing movements of an adept yogi.

And likewise, the core of their virtues and philosophies align.

Today, my daily practice is a blend of karatedo and kobudo plus a healthy dose of yoga. They lend well to one another as each discipline talks to and informs the other. But regardless of my movements, it’s essentially all one and the same, converging paths that lead to a shared destination of self-discovery. Every day I show up and move toward it, the journey being most important, and to approach with dedication, consistency, and perseverance.

What appeals to most practitioners of traditional martial arts and yoga is that the disciplines challenge both the mind and the body, delivering a release of stress and an increase in awareness. They induce agility, flexibility, strength, and well-being. They also bring about emotional growth of courage, courtesy, and compassion, as well as intellectual growth because there are no limits to learning about the physical and philosophical practices of each.

It is the non-harming philosophy of yoga—ahimsa—that people often believe distinguishes it from traditional martial arts. But a peaceful way of being is also the way of a traditional martial artist. Protecting ourselves and others is not contrary to ahimsa. Practicing ahimsa means that we are responsible for stopping our own harmful behavior and harm caused by others.

My students and I train karate and kobudo in a dojo—the place of the way. In a traditional dojo, the ‘way’ refers to the physical expression of the martial arts, as well as the way one is dedicated to the arts and the state of mind that one practices with. In a dojo, students and teachers are guided by a philosophy which teaches that rigorous training strengthens the body, prepares one for situations requiring self-defense and the defense of others, and for facing fears and persevering through life’s many challenges.

In the practice of yoga, my mat is like a little dojo. It’s my ‘place of the way’ of yoga. On my mat, I face the challenges of my own mind and body, practicing with the intention of physical benefit and clarity of mind.

A dedication to the practices of martial arts and yoga cultivates an attitude of ‘stick-with-it-ness’. There is no winning; there is just no giving up.