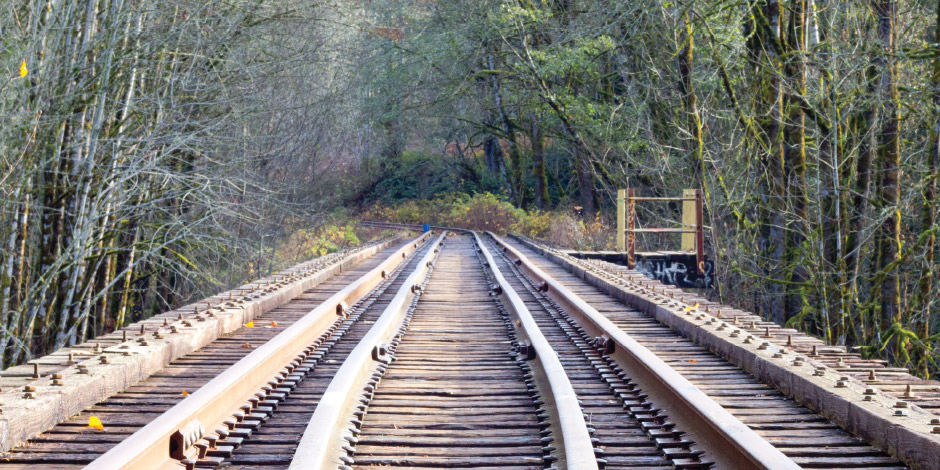 The Trent River Trestle connects Cumberland and Royston with more than steel and timber.

Roaming north along Royston’s Union Colliery Line, the air is damp and heavy with the scent of smoke wafting from residential wood stoves. Crunching your way through a carpet of leaves, you catch views of the moss covered concrete abutment, timber and rusted rails of the 289-foot long open deck trestle that spans the Trent River. Once part of an active railway line with both freight and passenger service running from the mines of Cumberland to the shipping point at Union Bay, today’s vagabond can drift in any direction without the worry of meeting an iron horse powering along the track.

From 1889 to 1966, this line hauled car upon car of coal from the Village of Cumberland—once one of B.C.’s biggest mining operations—to the seaport at Union Bay. Today, one can take solace in the chirping birds and the peaceful sound of water flowing over boulder and shale. It’s hard to imagine this quiet place isn’t far from what was once the site of Vancouver Island’s most catastrophic train derailment.

On August 18, 1898, the first loaded train of the day left the mines of Cumberland with a passenger coach attached. Travelling southbound across the Trent River, the central span of the bridge collapsed sending the locomotive and 20 cars into the water below. Six people lost their lives that sticky summer morning—the engineer, the brakeman, two contractors and two Japanese workmen. The majority of survivors suffered serious injuries.

Situated approximately midway between the mines and the wharf, the trestle was considered reasonably safe for light locomotives. Built ten years before the collapse, the wooden structure was unable to sustain the weight of an 88-tonne engine, its freight and passengers.

When rescuers first reached the scene, they found the engine on its side and damaged beyond repair—a mass of twisted iron surrounded by debris from the bridge. Heaps of coal, bent rails, engine parts, timber beams and coal cars were scattered throughout the ravine and river bed, and bodies lay amongst the wreckage.

As the dust settled, it became business as usual. Plans to rebuild the bridge were immediately underway because of a continued need to transport coal. In a matter of days the trestle was again ready for traffic. But the company wasn’t happy with the height of the crossing and instructed engineers to find a lower point to cross the river. Branching away from the existing grade, they decided on a spot that would allow for a lower and less costly bridge to be constructed. Logs for the ties were milled in Cumberland, steel was collected from both Union Bay and Cumberland, and stone piers were built using natural stone from the region. As soon as it was ready, rail traffic switched from the old high bridge to the new lower bridge overnight. Today, one can still see remains of the west abutment of the former bridge along with the rock and mine ballast that once made up the railway.

The current trestle is no longer active, with passenger service ending in 2011, but there’s a presence of the past as you stand on a structure that once transported coal from thriving mines daily. As you gaze towards the remains of the former bridge, you can feel the trembling timber of the ties beneath your feet as they splinter and crack under the weight of an engine, and you watch as it plummets into the river that pours itself between steep wooded banks. But today you hear nothing but nature. 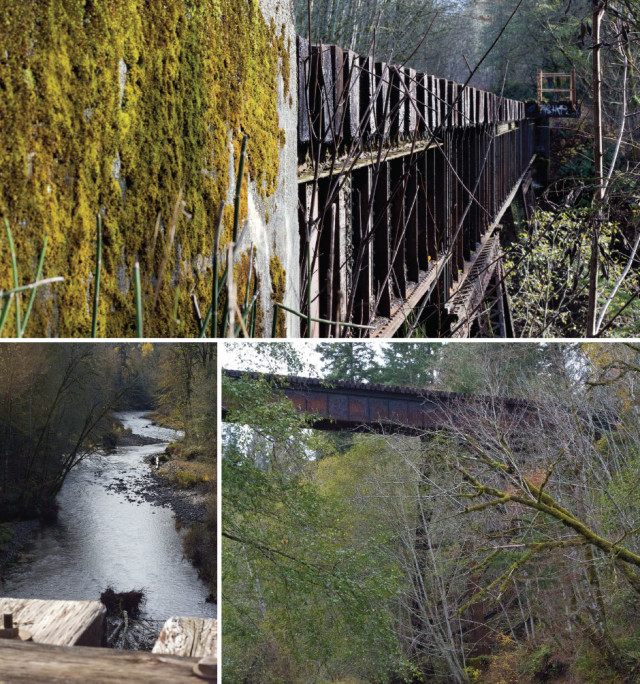