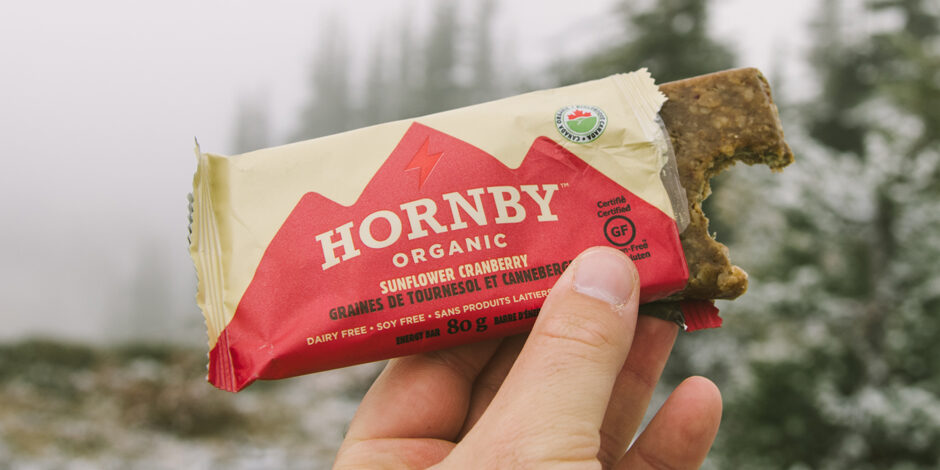 CALLED TO THE BAR

Hornby Organic is building an energy-bar empire based on a family recipe.

It began in a small kitchen on a small island, with peanut butter, honey, and oats.

It was 1993 when Trish Vet’s business got, ahem, rolling. After years of refining the recipes, she began selling her homemade Hornby Island Energy Balls, which quickly became a popular item at the bustling Co-op store in the heart of Hornby Island, where Trish lived with her family.

People loved the dense, flavourful, carob- or chocolate-covered treats, and Trish found herself with a hit. She built a tiny kitchen off their house to fill the increasing volume of orders and enlisted family members to help out. Her son, Irah, who shares his mom’s entrepreneurial spirit, remembers helping Trish load up the Volvo wagon and deliver to health-food stores across Vancouver Island when he was just a little kid.

Irah went to university just long enough to realize what he really wanted was to be in business for himself, and he knew what he wanted his business to be: Hornby Island Energy Bars. (That’s right, bars—much easier to package, store, and ship than balls.)

Over the years, he’d seen a steady increase in demand for his mom’s products. And he’d grown up eating them, tucking them into his backpack or drybag when he headed out on adventures. He knew they’d find a niche in the booming energy-bar market.

In 2013, after altering Trish’s recipe (with her blessing) to suit the bar format, Irah launched his line of Hornby Island Energy Bars. One of the first flavours, Chocolate Chip Peanut Butter, was based on his mom’s best-selling ball.

By this time, Irah had begun dating a fellow foodie entrepreneur: Cayleigh Rees, purveyor of Mexi Pops, the Comox Valley’s beloved frozen gourmet treats. The pair built a production facility on Hornby Island, and kept working there for as long as they could, but eventually realized a larger space was needed if they wanted to keep growing. “We had to move to town,” laughs Irah.

Luckily, they found a building in Courtenay that they could customize to suit both businesses’ needs; here, they’ve finally been able to automate much of their production process after years of mixing and rolling everything by hand.

In 2018, the company rebranded as Hornby Organic to reflect its shift to selling only certified organic products. Today, all ingredients are as fair-trade as possible and sourced from Canadian suppliers whenever available—like organic, gluten-free oats from Saskatchewan and Camino organic, fair-trade chocolate from La Siembra Co-operative in Ontario—but the price reflects the unspoken company credo that “eating organic isn’t just for elites.” As Rees says, “We wanted to make it possible for people to buy affordable, delicious organic foods.”

Currently most Hornby Organic bars are sold in Western Canada, where they can be found in dozens of small retail outlets, as well as chains like Thrifty Foods, Quality Foods, Save-On Foods, and Whole Foods, and they’ve recently expanded to Ontario. Online sales come from all over the place (“How the heck did this person in Halifax find us?” quips Rees.).

While COVID-19 put a dent in sales in the spring of 2020 (after a mid-March “panic-buying” spike), Vet and Rees attribute strong summer and fall sales to two factors: an increase in people getting outside for recreation, and a groundswell of community support for local businesses like theirs.

Of course, sales happen because the bars are delicious. However, this increased support may also have been in part the result of good karma arising from Hornby Organic’s business model, which aims to give three to five per cent of annual profits to community causes in the form of in-kind product donations.

Over the years, the company has sponsored long-running local events like the Perseverance Trail Run, the Island Cup [mountain bike] Race Series, and many more. When your goal is “to foster a community of inspiration and movement towards an organic future for everyone,” you generate a lot of goodwill.

Both born entrepreneurs, Vet and Rees thrive on the adrenaline of owning their own business and are always thinking about ways to grow. They’re currently working on ideas for different pack sizes (spoiler: kid-size bars) and new flavours, which can take up to a year to launch. “We’re deep in testing right now,” says Vet.

The business has come a long way from Vet’s childhood kitchen, and for now, “We’re still small, but we’re doing really well and we’re content. We don’t have pressure from investors to grow, and we’re proud that we’re providing good jobs in the community.” What a sweet spot to be in.