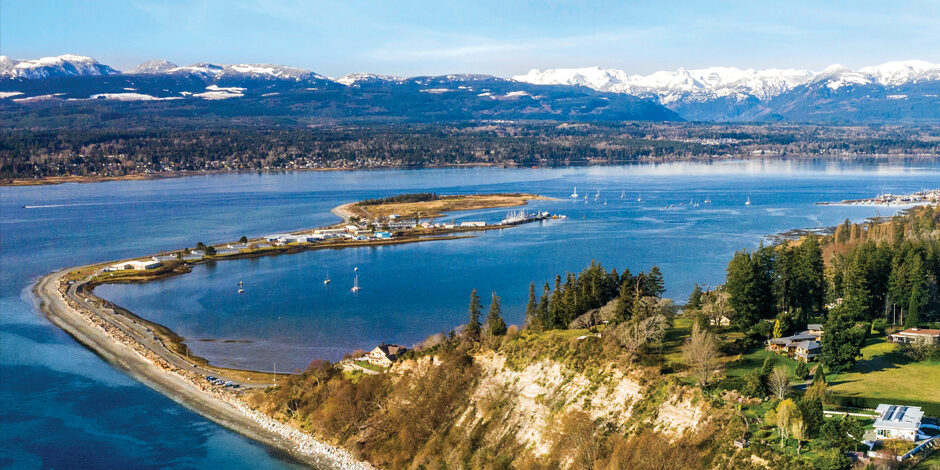 One of the most iconic locations in the Comox Valley is Goose Spit, a long finger of land that shields Comox Harbour and the Puntledge Estuary from the Salish Sea. It was originally created, and is now maintained, by sand and pebbles moving with the tides from the nearby Willemar Bluffs. The lagoon created by the Spit is a haven for many kinds of waterfowl. A pleasant place for paddleboarding in summer, it’s filled with kiteboarders on windy fall and winter days.

Goose Spit Park, which has been managed by the Comox Valley Regional District for over 50 years, offers panoramic views and is a popular spot for swimming, picnicking, walking, and sunset gazing.

Long before European settlers came to this region, the K’ómoks and Pentlatch Indigenous people used the land along the Spit to harvest traditional medicines, along with salmon and shellfish in season. They also used part of this land as a burial ground for important leaders. According to the book Land of Plenty: a History of the Comox District, Mary Clifton, the last fluent speaker of the ʔayʔaǰuθəm / Island Comox dialect, explained that the K’ómoks people called the Spit pélxwikw, which means “round on point,” perhaps a reference to the Spit’s smooth shape.

Settlers began to arrive in the Comox Valley in 1862, and by 1876, the Indigenous people of this land had been forced onto reserves, including an area of just over 13 acres surrounding the burial grounds. When the navy took over the rest of the Spit, the area was renamed Indian Reserve #3. And so it remains to this day.

Today, even the most casual visitor will notice the entrance to HMCS Quadra, a Canadian naval cadet training centre. In fact, Goose Spit’s military history dates back to a time before the Canadian navy even existed; the British Royal Navy began using the area in the mid-19th century for training purposes and to source fresh water. A permanent operations base was established on the Spit in 1896.

With the outbreak of World War I in 1914, many local men wished to join the war effort, but had to travel out of the Valley to enlist. In response, the local 102nd Battalion was formed in late 1915, drawing recruits from across northern British Columbia and eventually reaching a total strength of 3,863 men.

A formal decision was made to form a camp for the recruits on Goose Spit, but in January 1916, when the first recruits began arriving, Valley residents were struggling with an extraordinary eight feet of snow, which made it impossible for the soldiers to build their camp on the Spit.

According to L. McLeod Gould in his book From B.C. to Baisieux: “Conditions at Comox and Courtenay were deplorable. The men were told in all good faith to take nothing with them; that clothing, blankets and almost all the luxuries of home would be waiting for them upon arrival … and when the men arrived they found nothing, not even clothes … throughout the bitterest winter that had been known for years on Vancouver Island, the newly recruited men … were starved with cold.”

Gould describes some of the mishaps of those miserable first few months: some soldiers managed to put up canvas tents, while others bunked at the Port Augusta Hotel. The first mess hall collapsed under the snow. There weren’t enough supplies. At least the soldiers were able to help the townspeople clear away the snow that “in every locality was proving a very real menace to safety.”

Conditions improved with the arrival of warmer weather, and in June 1916, after only a few months of training, the battalion marched through Comox for the final time to board the S.S. Princess Charlotte for Vancouver, the first step of their journey overseas. They arrived on battle lines in France in August and fought at the Somme, Vimy Ridge, and Passchendaele. By the end of the war, over a quarter of the battalion’s members had lost their lives.

The Spit continued to see use after the 102nd shipped out. According to Land of Plenty, “between the two world wars, there was seldom, if ever, a year when there were no ships of war anchored in Comox Harbour.”

In 1940, not long after the outbreak of WWII, the Royal Canadian Navy built a facility on the Spit that saw continuous activity throughout the war. A jetty, several barracks, and various other facilities were constructed, naval personnel flowed steadily in and out, and training programs were established for seamanship, gunnery, and combat skills.

Local resident and historian Norman Pritchard notes, “There was friendliness between the locals and the naval personnel based on mutual respect. The behaviour of the men was good, and their concerts given in the old Knights of Pythias Hall were bright spots in the pattern of pioneer life.”

The facility closed in 1947 and reopened in the early ’50s, when the Royal Canadian Sea Cadets were invited to use the Spit for, in the words of Commanding Officer L.C. Brown, “A summer of shooting, sailing, and work.” In 1954, the area was converted to a cadet training base and two years later was renamed HMCS Quadra.

The navy has maintained a constant presence at Goose Spit since then. Every summer (except during COVID-19 restrictions), several hundred cadets aged 12 to 18 arrive at HMCS Quadra for training; much of the Spit is reserved for Department of National Defense activities, although walking is permitted along the beach below the high tide line.

Today, Indian Reserve #3 is accessible to K’ómoks First Nation (KFN) members while off limits to the general public. However, since 2009, the KFN has been campaigning to have the whole of the Spit legally returned. Uniting behind the rallying cry “No Spit, No Deal,” K’ómoks people have voiced their demands at Treaty negotiations between the Nation and federal and provincial governments. In 2012, an Agreement in Principle was reached that, if ratified, will mean that Goose Spit will once again belong to the K’ómoks First Nation.

While it seems unlikely that the Comox Harbour will ever again be home to warships, it’s a safe bet that Goose Spit will remain firmly entrenched in the fabric of life in the Valley.