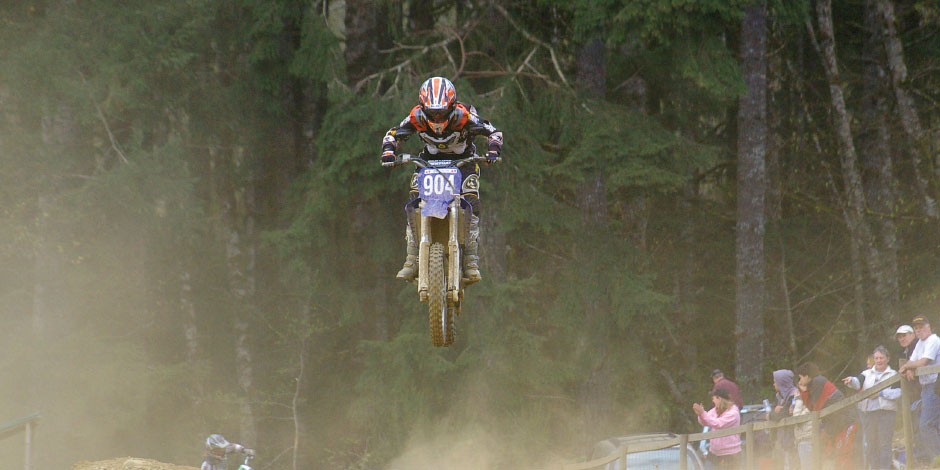 By four-stroke engine or clipless pedals, a Cumberland rider finds power in two wheels, however they spin.

Do I love my mountain bike or dirt bike more?

When I was four years old, I saw a dirt bike in a book and became fascinated. I blew out the candles on my birthday cake wishing for one, and asked Santa at Christmas time. It never happened.

When I was 24, I found my first dual-purpose bike. A 1979 Yamaha DT 125, silver and black with white fenders. She was a beauty. I got my motorcycle license right away and rode her everywhere. I had to lay on the gas tank to get her up to 80km an hour on the highway and I broke the ignition off while trail riding, and couldn’t stop for fear that I wouldn’t be able to start again. I loved that bike.

Eventually I started riding off road more, finding myself at coal hills trying to follow the guys off jumps and over gaps. I was smitten. It seemed like a natural progression to move onto a bigger bike and start racing motocross. The strength and conditioning that came from trying to maneuver a 200+ pound bike around the track was immediate, and I felt better than I ever had before. I’ve heard people question how hard it could possibly be, assuming that all you have to do is turn the throttle, but it’s so much harder than it looks. As my friend Brittany McKenna, who is new to dirt biking, says: “The energy and strength it takes to throw those heavy bikes around is extraordinary. There are so many things going on at once with the machinery itself, and then with your body position and timing… I believe it’s one of the most difficult sports out there.”

In order to be competitive, I had to do weight training and spin classes, as it was incredibly hard to do 12 to 15 minutes at maximum heart rate on the bike without crashing. There are so many obstacles during a race that there is no chance to catch your breath and recover, so additional training is important. I have never been as strong as I was then.

Each track has its own unique dirt and design. I didn’t need to be the fastest or even win the races, I just wanted to beat the track. My competitors were an incredible group of people. There were occasions when someone went down during a race and we would all stop to pick her up, dust her off and get her going again. During the time I was racing I got married (in my motocross boots) and then had my daughter (not in my motocross boots). I couldn’t have asked for a better atmosphere or group of people to raise my tiny human around. She had a pack of 10 to 15-year-old girls and boys that would teach her how to swim, skip, build dirt jumps, and sneak the odd freezie. The support around the track was amazing, and every weekend was spent with dedicated, like-minded families, all staying in their tents and trailers cheering for each other, always ready to offer help when it was needed.

I met Donna Mayland around the track when both of our kids were young, and her 17-year-old son has been in motocross since he was three. She says that raising a child in this sport was the best decision she ever made. “The motocross community is filled with amazing people dedicated to their families,” she explains. “It teaches our children to ride safely and about the spirit of competition. It builds confidence and teaches life skills such as care and maintenance of an expensive machine. When my son was young he used to idolize the other racers. Now that he’s the older racer, he takes time to give the little guys a fist bump or compliment them on their riding skills.”

The day came when I had to switch from dirt biking to something that wasn’t as detrimental to my knees. At the age of 33 I went in search of a mountain bike and started trail riding with the help of a friend. Though I went over the handlebars a lot at first, I liked it. It was easier on my body and in some ways, easier to do. Even riding uphill is easy when the bike is only 32lbs. I found the transition to be physically easy, I just had to get the hang of skinny trails and a front brake in the wrong place. But it was still heartbreaking at times to finish a mountain bike ride and hear a four-stroke thundering off in the distance.

I got a new dirt bike last summer and have mostly been teaching others how to ride. I hope that one day we’ll have a working relationship here between all bikers and land owners so we can create something like the Squamish Dirt Bike Association, with trails built and maintained for both motorized and non-motorized users. I’ve had amazing and memorable times on both a dirt bike and a mountain bike, and may even love them equally. But in a thriving bike community, I’m happiest doing both.