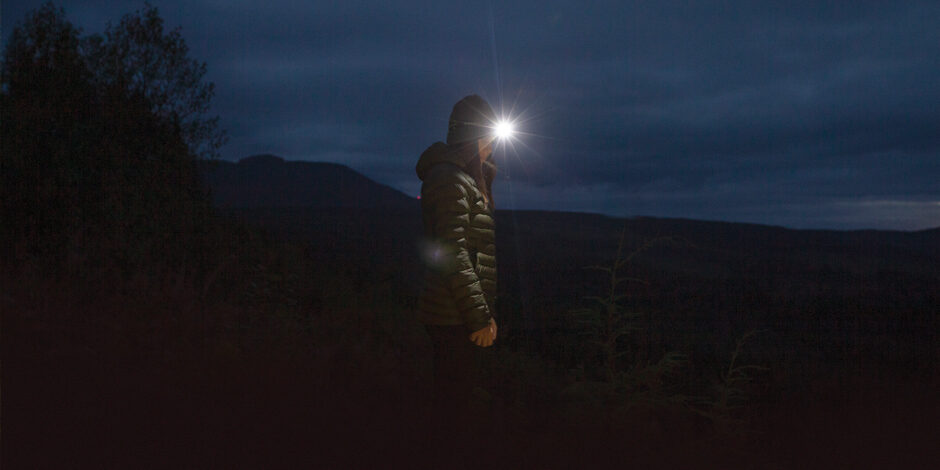 COME TO THE DARK SIDE

Heighten your senses with a walk in the forest after dark.

Does the thought of walking in the forest at night make you feel uneasy? Does it sound strange? And if you were to walk in the forest after dark, what do you think you would encounter? Screeching from the trees… growling in the bushes… bats flying into your hair?

Did you know there are people in the Comox Valley who deliberately go out walking in the night? Parents and kids, couples, groups of friends, and individuals are venturing into the trails of Cumberland, headlamps off, observing nature from a new perspective. Some are interested in experiencing the nighttime forest ecosystems, testing their senses, and having a bit of an adventure. Others are on a mission to seek out a much-misunderstood animal: the bat.

Movies, TV shows, and fables have not been kind to the reputation of bats, often depicting them as flying rodents, making Dracula references, and suggesting they carry disease. But in fact, far from being pesky mice with wings, bats offer some very redeeming qualities. Locally, they eat many insects that are intent on biting humans or consuming crops that we want to eat. Each bat can consume up to 1000 insects a night—that’s a lot of mosquito bites that will never happen. Thanks, bats!

Bats are indicators of ecosystem health, and they’ve been around since shortly after the dinosaurs disappeared (60,000,000 years!). All these factors make them subjects well worth studying, and not just by trained biologists and conservationists, but also by those keenly interested in learning more about the natural world—citizen scientists. National Geographic defines citizen science as “the practice of public participation and collaboration in scientific research to increase scientific knowledge.”

That could be you! Or me! Anyone with even a passing interest in wildlife and nature can help contribute to data monitoring and collection programs. Conservation biologist and bat researcher Tim Ennis established the Cumberland Bat Project with his colleague Meaghan Cursons back in 2018. Since then, the project has developed to include roost monitoring, education events, community art projects, and gatherings of folks who head out to see, record, and be amazed by these fascinating flying creatures.

Under Ennis’ leadership, local “bat-curious” citizen scientists complete a brief training program where they learn how to record the species and number of bats counted at various local roosting sites. There are currently 13 known species in the Comox Valley, so to help the volunteers identify and record bat activity, the Bat Project has several ultrasonic microphones that plug into a tablet or smartphone.

One of the Bat Project’s goals is to protect local bat habitat—the woods, wetlands, and meadows where we humans also like to be. But people usually make use of the landscape in the daytime. Exploring the woods at nightfall offers a different kind of thrill.

Even if you know a trail well by day, it turns into another entity entirely as dusk settles. By the time night falls to its deepest dark, all is different. On the path and in the flanking brush, there are hues of charcoal, brown, and grey. But looking up—way up—the dancing leaves and branches are ebony against the dark blue and slate grey of the sky beyond them.

Nighttime forest walking offers a whole new experience for the senses. Where daytime forest trails are alive with birds, people, dogs, and small animals, at night the woods offer a calm that differs from what you experience in the daylight.

“Bats are one part of the adventure,” says Cursons, who is also executive director of the Cumberland Community Forest Society. “But nature comes alive in other amazing ways at night. We’re heard beavers slapping their tails in the wetland, owls hooting and frogs signing. When the noise of the world is gone, the cars, the carpentry projects, the dogs barking—nature fills the space with such beauty and mystery.”

Note: Whenever you head into the woods at night, it’s a good idea to take a headlamp and use the red setting so your night vision won’t be as compromised as if you have a bright white light shining. At some point in your walk, stop completely, turn off any light source, and settle in. Let your eyes adjust to the dark and open your ears to the night sounds all around you.