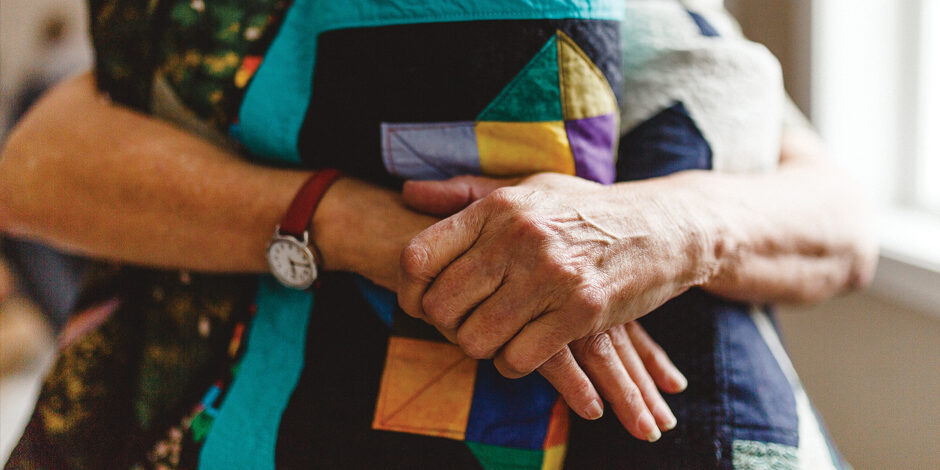 Local quilters have created a thriving guild, block by block and decade by decade.

One of my earliest memories is playing under my grandmother’s quilt frame while she and her friends sewed a quilt for a member of their congregation. I could see the silhouette of the women’s legs as I made dresses for my doll from fabric scraps and twine. Their soft voices and laughter lulled me to sleep in my tent, safe within the bosom of their friendship.

Quilting was first documented during the time of the pharaohs. Once a practical task of using bits of material for protection from the elements, it has evolved from a utilitarian task to a craft and art form. Long before the term was coined, quilting was one of the first examples of “upcycling,” or reusing materials to create a product of higher value than the original. These days, it’s an ideal pastime for people who want to help keep items out of the landfill.

The process of making a quilt involves joining three layers of fabric. The top layer is decorative. Usually, but not always, it’s a series of squares (called blocks) joined together into one large piece. The middle is a batting which provides insulation, and the third is a backing which touches the skin.

The Comox Valley is fortunate to have a place for quilters to gather, connect, and share their ideas and talents with others. The Schoolhouse Quilters Guild began in the early ’80s with a handful of people meeting at Airport Elementary School in Comox. Founding member Sheila Scrase recalls, “We would sit around on small chairs in the classroom and sew our blocks.”

Interest in quilting expanded each time the group held a show. As membership grew, the guild relocated to larger facilities until it landed in its current location at 2674 Dunsmuir Avenue in Cumberland. The hall has a kitchen, utility boards, ironing boards and irons, and a comprehensive reference library with over five hundred books.

From 9 a.m. to 9 p.m. every Thursday, the building is open for guild members to come together to share time, laughter, and expertise. A welcoming environment greets folks as they enter the building. It’s just like walking into a large group of friends.

Guild members, approximately 130, represent every section of the population, like a mini society. On Thursdays, anywhere from 40 to 50 members may come to work in harmony on quilting tasks. Some folks work on shared projects, some quilt by hand, while others bring their sewing machines to work on both shared and independent quilts. The occasional knitting or rug project may be present. The calibre of the work isn’t important, though much of it is fabulous. Camaraderie is what matters. Members, whether beginner or seasoned quilters, enjoy meandering around for the latest ideas and company. Every week, remnants are shared at the free fabric table, which longtime member Myra Shearer laughingly describes as resembling a feeding frenzy, like “gulls landing on a hot dog.”

The guild hosts guest speakers, workshops, and semi-annual potluck dinners, and members display their quilts at the Comox Valley Exhibition. And, twice a year, members gather for a weekend at Camp Homewood on Quadra Island. Jan Hill, the guild’s past president, describes this retreat as a “sleepover with fabric.”

The guild’s annual show takes place at the hall during Cumberland’s May Day celebrations. Vendors from Vancouver Island and the mainland bring patterns and fabric for sale, and locals exhibit their work. Volunteers sell tea and treats. Members hope the 2022 show proceeds as planned.

At the heart of the guild is a commitment to community. The group donates quilts to various community groups like the Comox Valley Pregnancy Care Centre, the Comox Valley Transition Society, Cumberland Lodge, and Today ‘N’ Tomorrow Learning Society, as well as baby groups, seniors, and veterans. They also make breast cancer comfort kits for those leaving the hospital immediately after surgery. In 2021, the guild donated 211 quilts and 120 breast cancer comfort kits.

I was delighted to learn the guild made my mother’s quilt when she lived at the Cumberland Lodge. Like the layers of fabric in a quilt, the tiers of our community connect through the caring work of the Schoolhouse Quilting Guild. Their reach is wide and their compassion unending. As Sheila Scrase says, “the connections go on and on.”