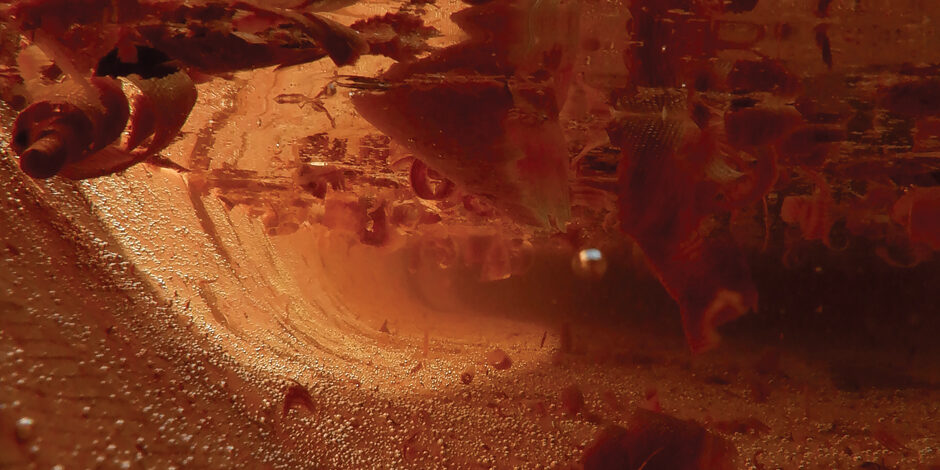 Hegus Rempel explains the genesis: “The concept for this project began following the 2014 Tribal Journey, when it was advised that KFN’s I-Hos canoe (made in the mid-1990s) be retired.* Upon being elected in 2017, I began speaking with forestry companies to try to source an appropriate log, and, though we were close a few times, we never quite found the right one. In spring 2021, however, Western Forest Products called and said they had a log that met our specs. From the outset I had Joe Martin in mind to oversee this project, as I had seen his work and really appreciated his history, knowledge, and views on canoe culture and his vast experience in canoe making along our coast.”

With the log delivered, the project officially kicked off in October 2021 with a traditional blessing. Hereditary Chiefs, Elders, and community members were present to assist the K’ómoks Cultural Group in spreading eagle down, blessing the log, and sharing songs and dances to celebrate. Sixty-three inches across the butt and over 30 feet long, the log came from a tree around 500 years old.

Next came the carving, but first the log was cut in half lengthwise with an Alaskan sawmill. “At first, we wondered if Joe was crazy!” says Trevor Hardy, “but we just had to trust him.” Sean Frank explains that carving a canoe from a full log—which is how the I-Hos was made—makes it prone to cracking; Joe Martin’s half-log method uses the wood’s edge (vertical) grain for strength.

The canoe’s carving was complete within a few weeks; next came the steaming. This has a dual purpose: to increase the width of the canoe, but also to lift the bow and stern. Ten inches of water were poured into the canoe, then red-hot rocks were shovelled into specific areas, which were covered with a tarp to hold in the steam.

“It was quite the spectacle, and involved a lot of people,” says Hardy. Steaming a canoe is risky, he explains—it can even snap the canoe in half. “You don’t see that method so much; it’s kind of a lost tradition,” says Frank.

After steaming, the canoe dried out for a couple of months, then Hardy and Frank painted it with the design they’d planned—a black and white, doubled-headed sisiyutł (sea serpent), inspired by a canoe that Frank’s grandfather, Doug Cranmer of Alert Bay, made in the 1990s.

However, Hardy and Frank also decided to leave four small circles unpainted—which Hardy describes as “viewing windows into the soul of the wood.” The new canoe will also use a mast and sail design. “They used to have a lot like that in the past,” explains Frank, “even some with two sails—they’re good for long journeys.”

Frank has worked on a few different canoe projects—his first canoe as lead carver was for display in the CVRD lobby—but this is his first ocean-going canoe. “It’s a real art,” he says, “and it’s been so beneficial to learn from Joe. He’s really helped us both develop as artists and carvers.”

This is Hardy’s first canoe. A woodworker since he was young, he says although there was traditional culture in his childhood, more recently he’s felt culture as “a big gap in my life—but making this canoe is definitely helping to fill that gap.”

Hardy and Frank say they want to make more canoes and to have races to help revive traditional canoe culture in the K’ómoks community, a dream Hegus Rempel also shares: “Canoe races used to be something we participated in with our sister Nations, and it’s certainly a part of Coast Salish culture.”

Both Hardy and Frank also talked about the importance of Tribal Journeys. Hardy went on the 2017 Tribal Journey, “paddling and pounding in the fibreglass canoe. It was a powerful experience, really quite fulfilling to land on the shore at Cape Mudge and be welcomed by the community.”

Frank is usually in support vessels on Tribal Journeys, but also talked of the outpouring of generosity from the hosts. “It’s quite amazing—gives you goosebumps,” he says.

Tribal Journeys are also key to Hegus Rempel’s vision for the new canoe: “I am so proud of the work, love, and energy Sean and Trevor have put into this canoe. As a dedicated Tribal Journey participant and skipper, I hope that the community will come together as a canoe family, take the canoe on Tribal Journeys, and reconnect with that aspect of our culture. It is truly a life-changing experience and cannot be adequately described. You have to experience it.”


*During Tribal Journeys, Indigenous families from across the Northwest coast paddle in traditional dugout canoes from their home communities toward a host Nation, stopping in at other coastal communities along the way. 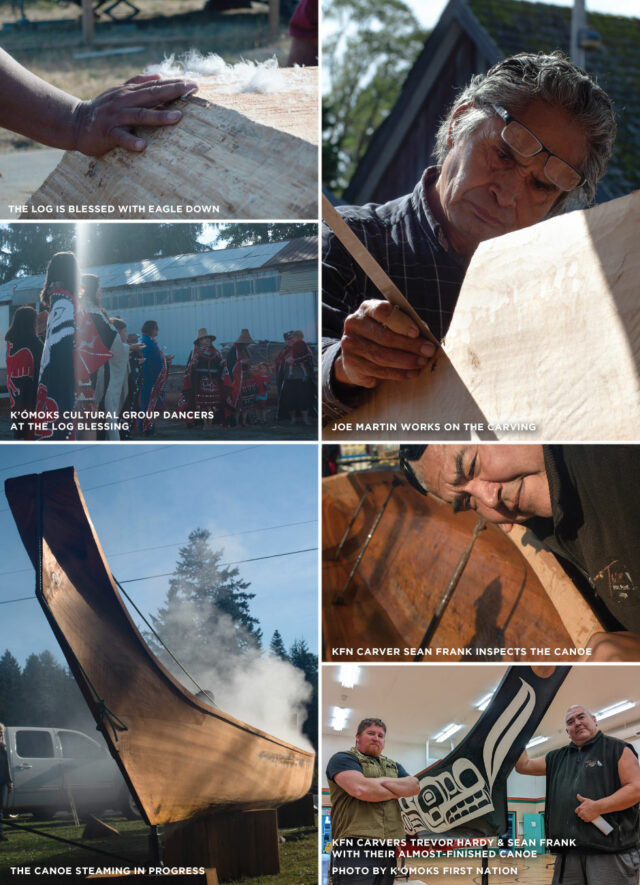