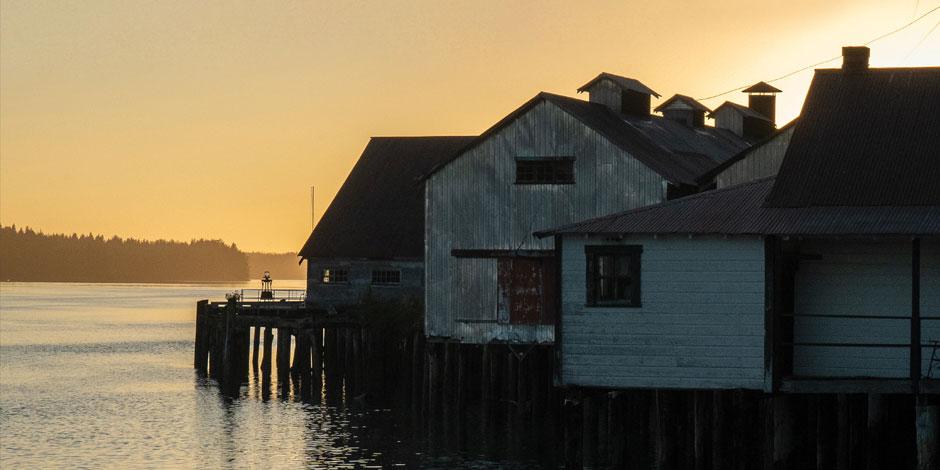 The profits from a thriving fishing industry dried up, and businesses moved on. Some of the sites left behind are in hazardous decay, polluting our oceans and tarnishing BC’s coast.

It was the 1880s and “The Great Salmon Industry” was in its golden years on the British Columbia coast. Entire towns were established to support the canning production facilities that were built along major inlets and river mouths. Bustling communities of cannery workers raised a daily din of activity. Employees lived in ethnically segregated areas, with Canadians and Europeans in comfortable housing, while the Japanese, Chinese, and Indigenous workers and their families lived in far more modest arrangements.

Over the better part of a century, the industry would see a rise and fall of over 200 canneries from Victoria to the Alaskan border. “Some canneries would only open for a single season, while others remained in operation for over 90 consecutive years,” says Heidi Rampfl, Collections Manager for the Gulf of Georgia Cannery Society, a non-profit organization in Steveston. Production highs and lows oscillated into the mid-1900s, with the last major cannery finally closing its doors in 2015.

Before widespread refrigeration, commercial food preservation necessitated canning. The turn of the 19th century brought an industry-high when Pacific salmon stocks seemed limitless. Salmon fishing continued at roughly 30,000 tons per year, with a record-high in 1897–a dominant Sockeye run on the Fraser River. During that year, the Gulf of Georgia Cannery (then known as the “Monster Cannery”) packed over 50,000 cases, or 2.4 million one-pound cans, from this cannery alone. World War I further amplified production when the “lifeblood of the Pacific” became a popular nutrient source for soldiers overseas.

With the advent of mechanical technology in the early 1900s, commercial fishing and canning production was streamlined. Although an expensive initial investment, canneries found faster and more economical ways of operating from the traditional hand-packing process via production lines. The larger operations such as BC Packers and CanFisCo (Canadian Fish Company) continued to thrive, while smaller facilities that couldn’t afford new technology were unable to compete and were forced to close.

Department of Fisheries and Oceans (DFO) took note of the importance of the fisheries protection in a 1902 annual report, when an investigation was underway to determine the sustainability of the industry. Looking back, one might expect that such an investigation would consider the sustainability of the species population in order to continue the fishery for generations to come.

However, discussions revolved around prioritizing more economical ways of sustaining the industry by keeping up with neighbouring US market competition. Seine net fisherman voiced their suggestions to see more nets in new regions, to both “cut off the schools of fish before entering US waterways” and “catch them earlier to lengthen the BC fishery season,” according to the DFO report. It wasn’t until years later that DFO began research into the lifecycle and potential threats to Pacific salmon.

Based on decreasing salmon stock returns, the Federal Government began restricting allocations and introducing new licensing regulations. Once again, smaller canneries couldn’t compete with larger corporations that were amalgamating up and down the coast, and more canneries closed their doors. Workers and their families moved on to other operational canneries and entire towns were left abandoned. Some sites would resume as a packing facility, fuel dock, or grocery store, while others were completely deserted overnight.

By the 1970s the majority of canneries on the coast had closed due to lack of demand, overseas competition, and further declining fish stocks. Few of the larger facilities remained open, with some converting operations to refineries in hopes of capitalizing on the remains of the industry. Herring was used to produce oil for vitamins and beauty products, while fishmeal was used as fertilizer and pet food.

With some minor modifications to the production facilities, canneries were able to convert their operations by acquiring repurposed agricultural equipment, such as grape presses used for wine production in California. “This permitted a few more years out of the converted sites, but most couldn’t press enough out of the industry to justify the business for long,” Rampfl adds.

Today, some canneries have been cleaned up and restored for historical and educational purposes. The Gulf of Georgia Cannery has been preserved as a Parks Canada National Historic Site and attracts around 60,000 visitors every year. The North Pacific Cannery in Port Edward’s claim to fame is the longest continuous cannery in operation: 90 consecutive years. Gladys Blythe, the last owner of the cannery, founded the non-profit Port Edward Historical Society and converted the site into a museum in the late 1990s.

The initial selection of cannery sites was geographically based on protection from inclement weather, while still allowing boat access and close proximity to a river mouth for fresh water. “These sites are biologically diverse hot spots,” says Ian McAllister, Executive Director and Co-founder of Pacific Wild, a non-profit conservation organization operating on the Central Coast.

River mouths provide rich habitat for bears as they emerge from hibernation to feed on grasses and sedges. Traditionally, First Nations would forage berries and medicinal plants along the shoreline. This important ecosystem provides habitat for spawning salmon that return each year to complete the cycle that begets such industrial demand. After the sites were abandoned, these once naturally thriving regions were left littered with pollutants. Valuable production line machinery was sold to other operational facilities, but everything else remained on site.

Today there is no shortage of evidence up and down the BC coast of former industry decay. “It’s an absolute embarrassment,” says McAllister. “In terms of the government taking responsibility for protecting the environment, these sites should go near the top of the list.”

Some of the worst examples, such as Namu in the Heiltsuk Traditional Territory on the Central Coast, pose environmental threats as they leach chemicals into the marine and terrestrial ecosystems. Once owned by big name producer BC Packers, Namu is still littered with discarded oil barrels, asbestos, steel, paint cans, long-expired food products, plastic, and creosote-soaked pilings left to fall into the sea.

“It’s right in the heart of the Great Bear Rainforest, which is regarded as a model of environmental protection world wide,” says McAllister.

This brings up the complex topic of responsibility as it crosses many different jurisdictions from federal, provincial, private, and traditional First Nations’ territories. Who is responsible for cleaning up this mess?

From its inception in the late 1880s, Namu was privately owned and tenured on leased Crown land. After the cannery closure in the 1980s the site remained open as a marine fuel station and restaurant. The most recent owner, David Milne of Namu Properties Ltd., purchased the property in the 1990s with hopes of turning it into a fishing resort. Before any progress was made on the property, Milne and his business partner disbanded, resulting in the current and most devastating state of decay. (David Milne and Namu Properties Ltd. did not respond to a request for comments.)

As the ownership of Namu is now broken up into multiple property categories, the priorities and capabilities of accessing each portion gets even more complicated. The wharfs and foreshore buildings that are falling into the sea have become provincial Crown land territory under the Land Act, while the remaining upper town site sits nestled into fee simple private land, and in limbo between forfeiture and reclaimed Crown land, traditional territory, and the Province’s Environmental Management Act.

“The only part that we have actual jurisdiction over right now is the foreshore, so we can’t do anything with the private land. As much as it pains us to look at it, we can’t,” says Shawn Meisner, Manager of Major Projects and Crown Land Sales with the Ministry of Forests, Lands, Natural Resource Operations and Rural Development.

According to the Province, Namu Properties has had no involvement around discussions of a cleanup plan. If the fee simple, or private tenure portion of Namu is abandoned and the property forfeits to Crown ownership, the land will fall under the administration of the Ministry. “It’s very difficult to do anything on the Crown foreshore cleanup without access through the private upland because buildings straddle both properties,” Meisner adds. “We can only administer what’s under the Land Act and that’s just the Crown land of the foreshore.”

Traditional Heiltsuk oral history and recent archaeological excavations prove the Heiltsuk continuously occupied Namu for over 10,000 years. Hereditary Chief Harvey Humchitt has been in negotiations with the Province since 2009 over site cleanup. “We wanted to repatriate the property back to the Heiltsuk,” Chief Humchitt says. “But because of the contamination, we felt that we didn’t want to take any of that risk on, so we backed off.”

Whoever claims responsibility for the private site—either Namu Properties, the Province, or a new property buyer—inherits a high price of obligation to take on the liability of safeguarding the site, which in most cases would be millions of dollars. But until Namu Properties steps up and takes responsibility for the cleanup, or officially dissolves as a corporation and the Province reclaims the land, it remains to decay while sitting in political purgatory.

The Heiltsuk envisioned restoring the sockeye run in the river system through a salmon enhancement program. As part of a land purchase consideration, they were looking at different revitalization options, from tourism to aquaculture, in hopes of further preserving the once-vibrant community. “I’ve been trying to get people’s attention and trying to get some help from the Government to clean up Namu,” Chief Humchitt says. “We’re working with the Province to see if we can be more involved with a cleanup process.”

Environmental groups, historians, and First Nations along the coast are in agreement that these sites need attention. With most of the cannery corporations now dissolved, the question of responsibility over hazardous material cleanup remains. “If the Province doesn’t take this on, we’re hoping we can get some of the previous companies that were involved when it was in operation,” says Chief Humchitt. “We’re hoping that they can jump aboard and give us a hand to clean up the mess that was left there.”

With Indigenous-based knowledge finally becoming part of the mainstream narrative, will these lands return to their original caretakers? Indigenous Peoples are the original guardians of this land and had no trouble sustainably managing these natural resources for millennia. “To protect and enhance the historic cultural values at Namu, the Heiltsuk will continue to play a major role in any strategic planning the Province undertakes,” says the Ministry.

Whether these conversations will be enough to help clean up these dilapidated sites and restore the natural balance remains to be seen. McAllister, who works closely with the Heiltsuk, hopes that all the contaminants will be completely dealt with—regardless of whether they’re labeled “hazardous” by provincial standards—and the Heiltsuk Territory will be returned to the traditional stewards. “There’s just no other owner that would make sense in the future.”

The Heiltsuk Tribal Council and members of the Bella Bella community are planning to organize a volunteer-based initiative at Namu within months. “We’ll just continue cleaning it up,” Chief Humchitt declares. “We’re not going to stop.” 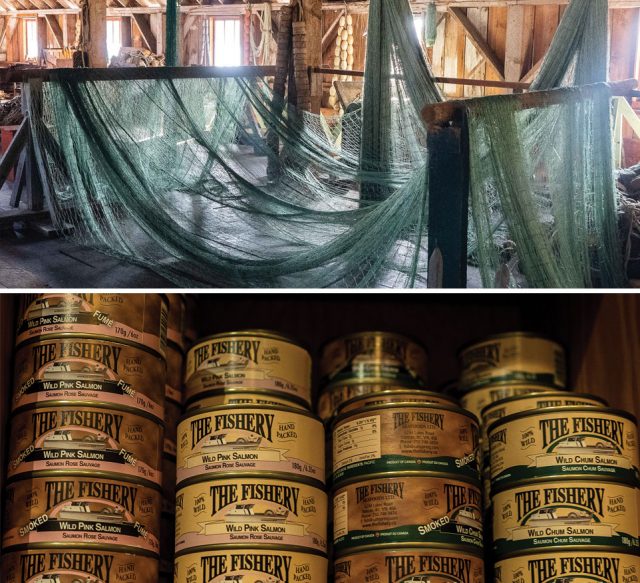