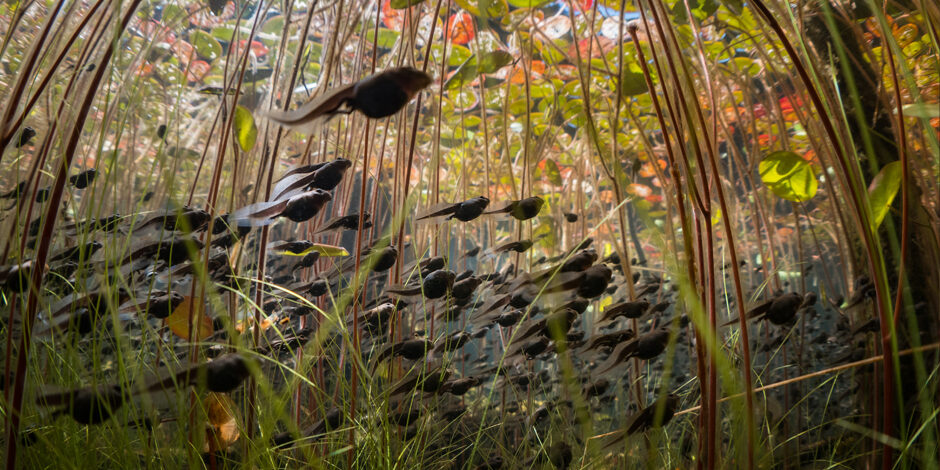 Small but mighty western toads have places to go, and we need to help them get there.

I remember well the pitter-patter of tiny toad feet on my lawn when I was a child growing up across from the swamp on the Comox Lake Road. Each summer, as the tiny toadlets migrated up through our yard toward greener pastures, they would rest for a while under the cool sandstone rocks surrounding the small pond beside our house. My sister and I would carefully lift them up over large objects and cheer them on as they crossed the many obstacles in their path.

I see now how lucky we were to be on their migratory route and to enjoy their visits each year. Not everyone is fortunate enough to live on a tiny-toad superhighway.

In Cumberland, we are truly blessed to have a seemingly robust population of western toads (Anaxyrus boreas) living right in our backyards. Anyone who has spent time outdoors in July and August has likely come across them and admired the persistence and grit of these teensy creatures moving through the forest and along the trails.

With this blessing also comes the responsibility to help the species survive. The western toad has been listed as a federal species at risk since 2002, primarily due to the threats of the infectious disease chytridiomycosis and mortality associated with habitat fragmentation, roads, and other human activity.

One of the coolest things about western toads—which unfortunately also contributes to their vulnerability—is that they undertake a biannual mass migration. In late July and early August, freshly metamorphosed toadlets migrate up to five kilometres from their breeding ponds to their upland overwintering habitat, where they stay burrowed in the soil for the colder months.

In the spring, breeding adults return to their ponds of origin to lay long strands of tiny black eggs, which then hatch into swarms of black tadpoles, which then metamorphose into juvenile toadlets. Then the mass journey to their winter habitat occurs again. During this migration, thousands of toads move together across the landscape, covering the earth completely with their tiny bodies.

Unique to our area is the intersection of the mass migration routes with our renowned trail system. Last summer, with the debut of the new climbing trail (Sobo no Michi) and an increase in outdoor recreation due to COVID-19, the section of trail near Sykes Bridge became plastered with squashed toad carcasses during the migration period.

I have been watching the casual destruction of toads on our trails my entire life, but last summer it seemed to reach a critical mass, and a switch flipped inside me. The signs put up by the Cumberland Community Forest Society (CCFS), in collaboration with the United Riders of Cumberland (UROC) were a good reminder for those of us who already knew what to look for. However, many recreators must not have noticed the dime-sized toadlets in their path until their tires had squashed the life out of them.

As a board member of the CCFS, I took up the cause to try and find a better way for us to coexist with toads. While researching other municipalities where trails and migration routes intersect, I discovered that Whistler is a leader in toad conservation and research.

The Municipality of Whistler’s Environmental Stewardship Program has been studying and protecting the western toad population at Lost Lake since 2005. They’ve implemented infrastructure and imposed seasonal trail closures to protect the toads during their migration period, with great success: in 2020, they witnessed only 23 toadlet deaths during the migration period (the majority of which were the result of one tanker truck driving through a blocked-off road). To give some context, during peak hours an estimated 1,800 toads per hour may cross a trail.

It is clear that we need to improve the stewardship of our western toads. Therefore, this summer the CCFS will be working with local partners to protect the western toads during their migration. You can expect to see naturalist-staffed info tents in the Cumberland Recreation parking lot and temporary trail closures during their migration, which typically lasts two to three weeks, depending on the weather.

We will be canvassing the community for support with data collection and toad monitoring, because it will take a village to save the toads. If you would like to get involved, please email tinytoads@cumberlandforest.com.