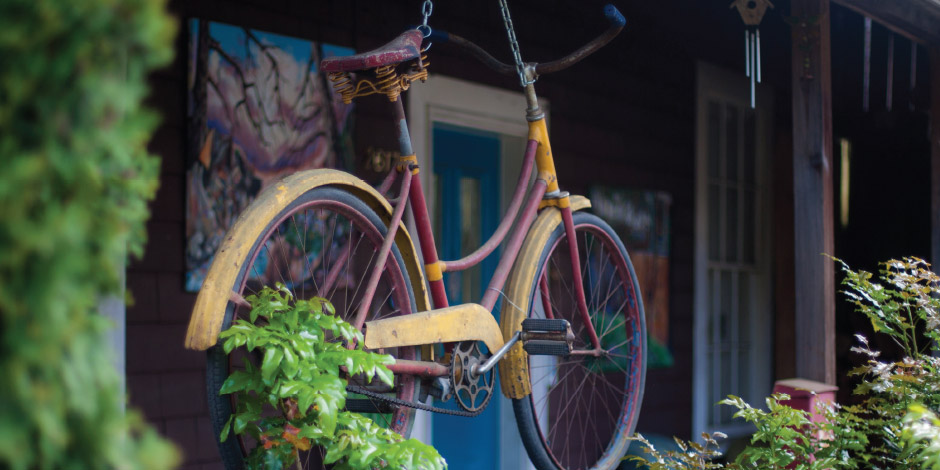 It’s go time. I have to drop off my Delica at the shop to get a skylight leak fixed. I was planning to sell it, but Cumberland council is about to vote on a bylaw that will officially change the directional flow of traffic in the village to accommodate right-hand drive vehicles. After that I’ll swing by Cumberland Crates with my fat tire for some measurements. Archie and Rod are designing a customized crate for my bike that will carry three growlers and a pair of squealers. That reminds me… When is Mike over at Cumberland Brewing Company going to start brewing an easy drinking Lager? This is the Luckiest town in Canada, after all. In fact, wasn’t Lucky Lager originally brewed in Cumberland? Who cares. Hey, wait a second… Did that guy have a dead deer on the floor of his Westfalia? Oh well. Now, for my afternoon ride plan; it will dictate my quiver selection. Fat tire, single speed, 650 or 29’er? I was going to do something XC classic like Buggered Pig, Short and Curly, Entrails, Swamp Monster, Crafty Butcher, with a Black Hole/Space Nugget finisher. However, I just found out, while buying my kid a toddlercino at the Wandering Moose Café, that there’s going to be a photo shoot with a bunch of people dressed as fairies in the Cumberland Community Forest. It’s all for a calendar that will be sold to raise money for the forest society. I don’t want to risk running over a fairy, so I’m going to re-schedule for an evening ride. Besides, it’s Wednesday and that means it’s ladies night on the trails. Last Wednesday night I was passed on Tea Pot by eight hot chicks. It was awesome! Hey, there’s councilor Sean giving the Waverly Hotel facade a fresh coat of paint.

Which reminds me, I closed the Wave on the weekend and ended up at an afterhours swingers party at some house way down at the far end of Camp. Fingers crossed for a repeat this weekend!

I don’t live in Cumberland, but I’ve been sampling its cultural delights for years. If I did live there the aforementioned Cumberland dude might be me. Could life get any sweeter in the village also known as Dodge? These days, anything seems possible here. In fact, if Cumberland decided to put in a bid for the Winter Olympics I wouldn’t count them out.

There’s a standard metric I like to use to measure a town’s cool cachet. It’s simple; when a town becomes the object of satire, and sometimes ridicule, said town is doing a lot of things right. So many things right that outside observers begin to look at it with envy that gives rise to satire. If you’ve seen Portlandia, the show that lampoons all things Portland—the city where young people go to retire—you’ll know what I mean.

Cumberland has crossed the threshold. Not long ago many people gazed down from the gold plated fire hydrants of Crown Isle at Cumberland where the potholes were big enough to swallow F-150s and the crack heads were marrying their cousins (pretty sure they weren’t, but that was the tone of the stereotype). Now those same folks are driving to Cumberland with $6000 mountain bikes slung over their tailgates to ride trails gaining national, even international, renown before polishing their elbows on the bar of the CBC or Waverley Hotel; and generally soaking in the ambiance of an authentic town that doesn’t feel like it was conceived on the back of a cocktail napkin by a real estate shark.

I have a confession. I’m as old as dirt relative to Cumberland’s recent coming of age. So old that I remember like it was yesterday riding bikes with friends from Courtenay along the newly paved but yet to be opened, four lane Inland Island Highway to catch a show at the Waverley. One morning, probably 3 a.m.’ish, my buddies and I got pursued on the return home in a slow speed OJ Simpson-like parody by a private security guard hired to monitor the highway for interlopers like us. We ducked him at the Comox Logging road overpass. Only the intervention of one of the more sensible members of our crew prevented the rest of us from tinkling on the rent-a-cop’s windscreen as he drove beneath us scanning the ditches with his search light. That’s how long ago it was, that’s how immature I was. But stick with me. What has made Cumberland cool today is its tendency to piss on convention. This anti-establishment streak is perhaps a legacy of the village’s most famous inhabitant, Ginger Goodwin. When Canada entered the First World War, that Commie Goodwin was a pacifist who refused to show up for service. Authorities used this draft dodge as the pretense to send a posse out to hunt Goodwin down and shoot him dead in the bush at the end of Comox Lake in the summer of 1918. In reality, it was his union organizing efforts to right the atrocities of Lord Dunsmuir’s coal mines that killed, on average, a man a month that put him in the cross hairs of the establishment.

Good things have happened in Cumberland in spite of the establishment not because of it. The people lead, politicos tend to sheepishly follow. Like many towns that buzz with an alchemy of inventiveness, entrepreneurial chutzpah and cheekiness, Cumberland possessed a few important raw ingredients long before it became a destination, which laid the foundation for today’s strong sense of community and diverse suite of small businesses that peddle in books, beers, boxes, beards and other things. It had a natural heritage aesthetic, a colourful history that provided a unique narrative arc, and affordable housing that attracted youthful people with energy and ideas. If planners and academics could bottle Cumberland’s civic pride and sell it to other towns they would, but some shit you just can’t bottle.

Fifteen years ago when Hancock Timber Resource Group, with a head office in Boston, were set to clearcut the forest on the village’s doorstep, the elected council of the day would have shrugged their shoulders, as if to say, rapacious resource extraction has always defined Cumberland, why stop now? Citizens said no. They rallied, formed a society, sold plants, enlisted local musicians to cut an album of original tunes, and some took out second mortgages on houses, to enable the purchase of 70 hectares. The effort continues today, to buy another 50 hectares. Consequently, other communities now look to Cumberland to see how a small, but tenacious, non-profit can negotiate with a multi-national logging company to positive result. Not so long ago, Cumberland council in its wisdom decided to grow the municipal boundaries of the village fivefold to accommodate future growth. Along came the Vancouver-based developer Trilogy, with a plan for auto dealers, movie theater (does anyone go to those anymore?), big box retail masquerading as boutique and hundreds of homes at the Cumberland interchange. I went to some of the public hearings for this development where Trilogy CEO John Evans stood before the assembled crowd, largely hostile to the idea of Trilogy. That’s because Cumberland council had endorsed this massive residential commercial development on the outskirts of the village despite the ink having barely dried on an official community plan, which involved unprecedented public involvement, and strictly forbade such sprawl. In a master stroke of PR, Evans told Cumberland citizens that the company’s approach to property development was to allow the land to speak. Apparently the land spoke and said it would be a good idea to import a piece of Surrey sprawl. Thankfully, economics seem to have derailed this absurd proposal for now, and the signs touting the development are just fading billboards being consumed by Scotch broom.

Now Cumberland arrives in 2015. No community is perfect; not even Cumberland. Running a successful small business in a small town is no slam dunk. Being on council is no easy ride either, constantly balancing the demands of growth with the need to preserve what makes a place charming and authentic. The other day, I realized how far Cumberland has traveled after overhearing a conversation at CBC. A couple of nouveaux Cumberlanders were telling some other nouveaux Cumberlanders that they had been invited to Courtenay for dinner, which elicited the following response: “You actually know people in Courtenay?
I never leave Cumberland anymore.”

You mean Cumberlandia. Recently I learned that village council had adopted the brand “Explore the Legendary Village of Cumberland.” Good old Dodge is so hip and brimming with confidence these days that it has taken to calling itself “legendary,” which is a descriptor usually not self-applied. That’s why Cumberland has become a place ripe for satire, and that’s the mark of a village that is doing at least a few things right. 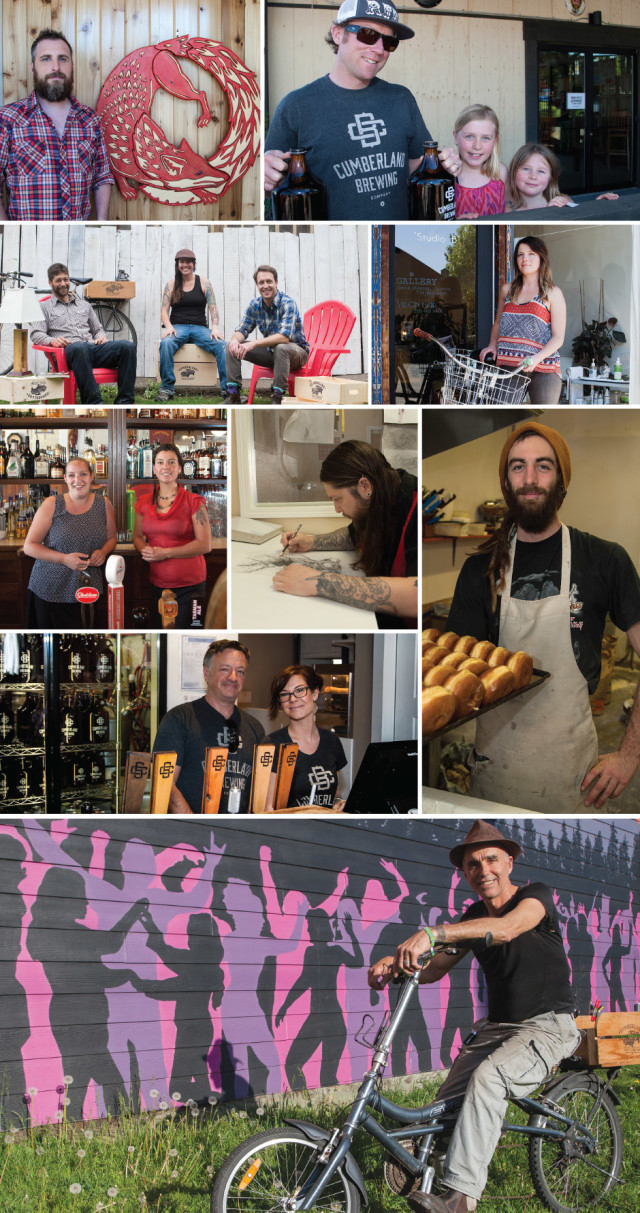