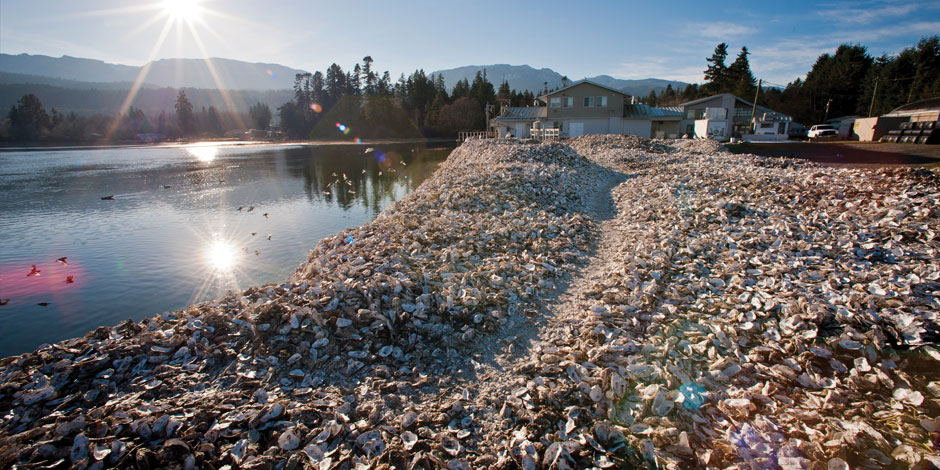 The nutrient-rich waters of Baynes Sound provide the ideal conditions for oyster harvesting, drawing workers to the Valley’s steady industry.

The red embers of cigarettes glow through a thick fog. It’s 6am and workers outside the processing plant at Mac’s Oysters chat with one another. Beside them is a heaping mountain of refuse oyster shells—evidence of the scale of demand for oysters from the bountiful waters of Baynes Sound.

Step into the buzzing plant, and the aroma of fresh, concentrated sea hits the nostrils. It’s like they’ve captured only the best parts of how the ocean smells within the building. Third generation shellfish farmer, Gordy McLellan, gives a tour of his operation, and it begins with a taste of their product. “Most people don’t like raw oysters this early in the morning,” says McLellan between smiles.

The sun hasn’t risen yet, and workers are busy preparing a shipment of shellfish destined for cities around the world. Daryl Sampson ties his apron behind his back. On his left hand he slips on his chainmail glove and, over that, a thick rubber one. Sampson has been shucking for around 13 years and can shuck around 2000 oysters a day. Oysters from either the beach crew or the rafts are dumped through a shoot above the shucking table where he and four others stand for their eight-hour shift. Easy conversation passes through the group. “Most of us have been working together for 15 years,” explains Sampson.

At the marina the boat crew begins their morning ritual. It’s 7am and as the pot gurgles, skipper James Holmes pours his first cup of coffee. He stares east where Denman Island would normally be seen. On this January morning his view is cut off before the end of the dock. “I’ve never seen fog this thick,” says Holmes. “You have to be really careful when it’s like this.” Born in Ucluelet, he started farming oysters seven years ago. Before that, he spent a few years farming buffalo in Alberta.

Much like raising buffalo, oysters need attention regardless of the weather. Holmes unravels the half-hitches from the cleats that hold his boat. Using only GPS as a guide, he navigates a careful zigzag-route towards the rafts somewhere in the middle of the sound.

Back at the marina, Vicki Larade waits for the boat crew to return. Her quick hands sort through thousands of oysters a day. She disperses them into less crowded racks as they grow. Originally from Vietnam, she’s been a refugee twice. After surviving the Second Indochina War (Vietnam War) she sought asylum in China. After that, she sought asylum in Macau. Upon finally immigrating to Canada in 1985, she began working in the shellfish industry.

Some of the oysters Larade sorts are destined for the continent she left 34 years ago. There are many shellfish operations across the Pacific, but in Asia it’s the product from North America that fetches the best price. When asked why shellfish from the area is so popular in Asia, McLellan says it’s the clean water. He explains how the sound flushes well and, as a result, is also nutrient rich. When compared to other places in the world, pollutants are minimal.

But there are issues in Baynes Sound. Some examples include ocean acidification, vibrio, the green crab, and norovirus. When an oyster is eaten raw the likelihood of exposure to norovirus is increased. The most common way for norovirus to spread is when exposed to human sewage from leaky septic systems. As Baynes Sound becomes more populated, the likelihood of norovirus contamination increases.

The Comox Valley produces the most oysters of any area in Canada. According to Comox Valley Economic Development, fifty percent of BC’s shellfish comes out of Baynes Sound, selling at about $27 million wholesale. It is a major source of reliable, local jobs in a renewable industry.

There is irony in that while the shellfish industry creates jobs in the Comox Valley, the increase in population leads to an increase in threats towards the industry. This irony isn’t lost on workers. And perhaps it’s what they talk about in the early mornings, amongst themselves, looking out toward the ocean through morning fog.