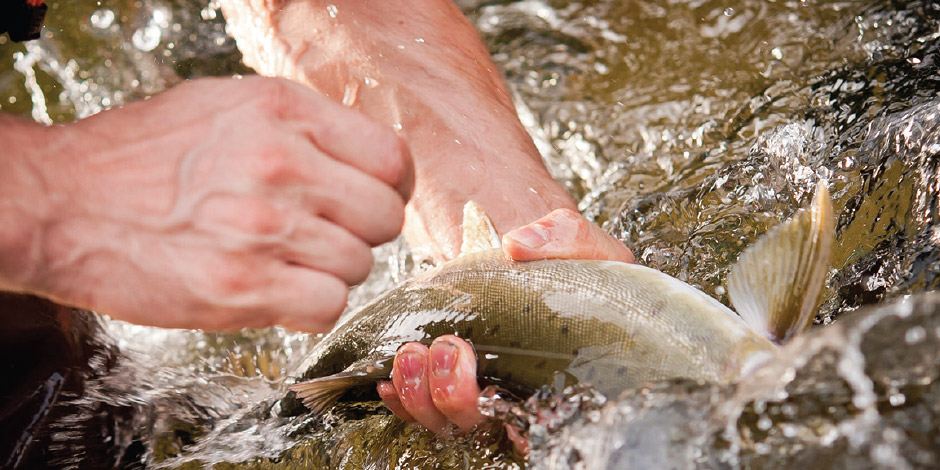 I once met a witch in a cafe in Cairo who told me that I was a lot like the season autumn. She explained, that for me every day was like fall because I saw all things for their true colour and their inter-connectivity. I found opportunity to write about quantum entanglement and salmon hard to pass up.

Every fall hundreds of thousands of salmon return to the gravel beds of the rivers, streams and creeks of Vancouver Island–the place of their birth–to spawn and die. It’s the cycle of life on magnificent display to remind and reinforce to us of the immortality of the soul. It’s about ascension and dissension, the ebb and flow the yin and yang of all things. Recently my father passed away and weeks later my daughter was born. Is it truly any different? Nature always finds a way to push forward and renew itself. Everything in the cosmos seems to be governed by these fundamental principles.

The salmon’s journey is filled with obstacles, challenges and constant adversity. Sounds a lot like our lives. It’s a wonder that they can travel so far with little or any nourishment and with a singular intention. Mate, die and be reborn. The power of its intent makes the salmon the most revered animal totem in Native American cultures. Salmon truly represent the eternal cycle of regeneration. If only we paid close attention. We would then see how all things are reflections of our nature.
More often than not it is asked how do salmon know where they’re going. Some researchers believe that they find their way by using the sun and the stars. Recent studies suggest that salmon are extremely sensitive to changes in the ocean’s salt level and temperature, and that this is how they know that they are close to the river of their birth. There is even new evidence that baby salmon (fry) imprint the distinctive odours of their natal stream. An example of this some salmon will stay in the estuary if there isn’t enough water in the river because they can smell things that would otherwise be covered with water. Talk about extra sensory powers.

Of all the species on the planet, ants and humans are the most similar. Salmon and humans also share much in common, but I believe that salmon are much higher up the hierarchy of spiritual ascension–more like Gods. Even when dead in the river after completing their mission, the nutrients in their carcass fuel the watershed and estuary. These nutrients get transported by animals all across the forest floor and have immense impact on eco-systems miles from the river. All these fine details are quantumly entangled whether we are aware of it or not. There is good reason why the Chinook are also named King, or Tyee, which is translated as Great Spirit or chief above.