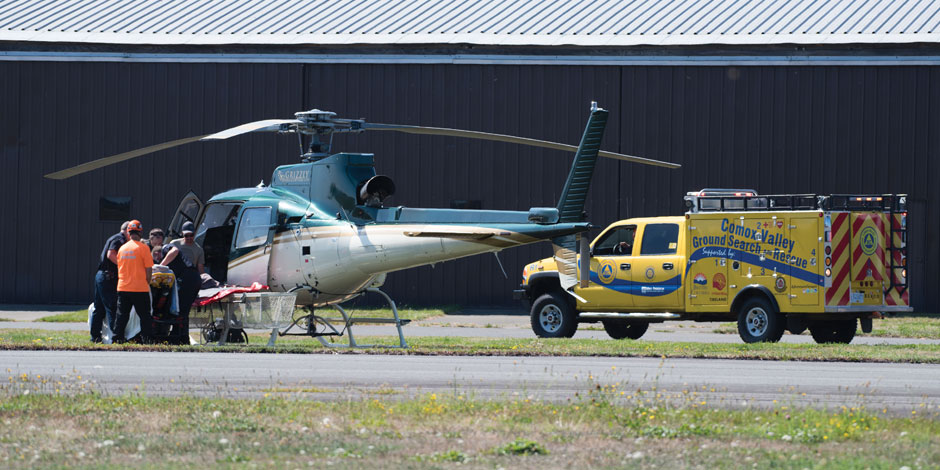 Comox Valley Ground Search and Rescue trains for innumerable circumstances in order to return people to civilization. But some challenges are more than physical.

As I roll over a small bump in the slope, a voice calls out to move out further to the edge of the run on skier’s right. Just below, on skier’s left, I see a horizon line, an indication that there is a cliff or a hole in the snow beyond. Ignoring the call, I move toward the line, and as my view breaks the plane I see a hole at least eight feet deep. At the bottom is the distinct outline of a snowboarder, upside down and face down in the hole. Shouting out to the rest of the team, I pop my skis off and jump into the exposed creek bed to flip the person over and get an idea of why they aren’t moving. As the face turns skyward, I know immediately that we are too late.

Radios crackle and spit with information from crews in the field; locations and clues being relayed to search management means that the 130+ searchers from across the province are hard at work combing the Strathcona Park backcountry for any sign of our lost subject. Calling in to command, I get a confusing message about finding the subject. After a few moments of discussion, it becomes clear that one of crew has found the subject in a cabin on a backcountry lake. The person I have found is not who the team was looking for. Instantly I know that the other man has survived; the realization that we have found him creates a wave of joy that almost brings me to tears.

While two vastly different outcomes, these stories both result in the achievement of our goal: to find and assist those who are lost or injured in the wilderness. Obviously the second story is one that creates happiness—for our team, the family, and the subject. The first creates only sadness, but provides a level of closure to help the family carry on with life.

Comox Valley Ground Search and Rescue (GSAR) responds to over 50 calls per year. Teams may be involved in everything from ground searches, swift water rescue, rope rescue, mountain rescue, and everything in between. Volunteer teams are responsible for Search and Rescue (SAR) including ground and inland waterways within the province; this mandate is separate from military SAR teams that provide cover for aeronautical or marine tasks or volunteer marine teams. Comox Valley GSAR does not, and never will, charge for services.

Comox Valley GSAR volunteer Paul Berry had only received his pager the previous day when it first went off, four months after he began extensive training.

He was one of the first to arrive at the SAR Hall and was immediately added to the initial response team of six members who would ascend from the trail head near Century Sam Lake. “As dusk and cloud settled around us, we reached our party to find a thirty-five-year-old male with a compound fracture to his right femur and a reduced level of consciousness as a result of a fall,” recalls Berry.

A request had been put into 442 Search and Rescue out of Comox for a medical evacuation via helicopter, and a call went out for assistance from teams across the island. Three of Berry’s team members set about stabilizing the injury, while three others began to cut a clearing on the steep slope in case weather allowed the helicopter to reach their location.

Additional GSAR members from Comox and Campbell River joined, bringing the total number of rescuers on scene to 11. “Just after midnight, the cloud lifted, allowing a view of the valley below,” says Berry. “As far as the eye could see, there were bright dots bobbing along the switch back trail leading to our location. Each dot was a SAR volunteer who had left their homes and families to come to the aid of our injured hiker. This moment anchored my passion for SAR.”

A weather opening allowed the helicopter to reach the team and evacuate the hiker. “I have reflected on this experience time and time again throughout the past twenty plus years of service,” he recalls. “Each time I struggle to hold back tears of pride in the men and women from across our province who re-enact this scene countless times each year.”

I am often asked why we do what we do and the answer is simple: Who else would help? Adventurers and explorers in the wilderness get lost or hurt, elders stroll into the woods in a moment of senility, children run off into the wild chasing an imaginary friend—and all are equally deserving of our help. Unpaid professional Search and Rescue teams are often the only resource available that is capable of assisting those lost or injured in remote and technically challenging terrain. Tens of thousands of hours per year are spent training, practicing, and deploying into the field to help those in need. We live in your community and are probably your friend and neighbour. Helping those in need is what friends and neighbours do.

Search and Rescue teams are always on the lookout for technically skilled people. If you are interested in joining, please visit cvgsar.com or contact your local team for more information.