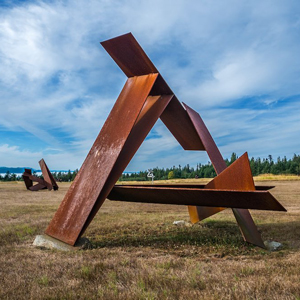 First opened to the public in 2008, the 200-hectare Jeffrey Rubinoff Sculpture Park is home to a collection of over 100 of Jeffrey Rubinoff’s sculptures. The Park is situated on a farm purchased by Rubinoff in 1973 for the purpose of the creation and storage of his work. Rubinoff repurposed its barn, originally built in 1889, into a fabrication and casting studio, and worked there from 1980 until his death in 2017.