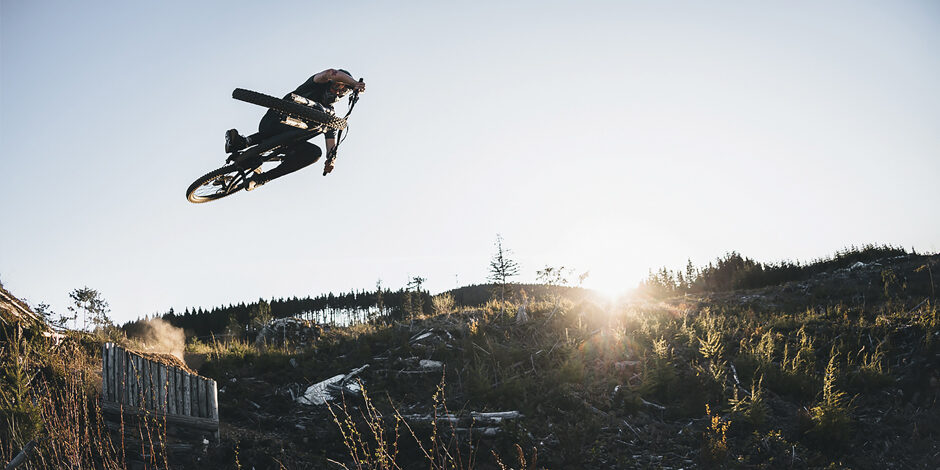 DROP INTO A DEEP READ

In 2015, on his way to Whistler, Duncan Hague flew over the Rocky Mountains and peered out the plane’s little oval window. Almost one million square kilometres of British Columbia’s mountainous landscape spread out below him. It would become the backdrop for his life’s next chapter and his website, Gnarrative.com.

In his British hometown of Sheffield, Hague was into trials bike riding (where the rider hops over and onto obstacles), and when he touched down in Canada, he was keen to get into downhill mountain biking. “I knew I’d love it,” he reminisces over the phone from his home in Nanaimo.

A season in Whistler turned into more than a three-year stay, and, as he became entrenched in adventure-town culture, Hague knew he wanted to work in the mountain bike industry, so he figured he’d focus on photography.

He eventually learned how to take photos by “paying attention to what all the buttons on the camera actually did,” and says his photo-taking skills developed significantly during his first year in Canada, where he was surrounded by creatives and other photographers.

His work visa ran out and he returned to the United Kingdom, where he grew a client base shooting for mountain bike brands and publications. Whenever he’d meet riders or others in the industry, he’d learn about their untold stories, which, he says, “were fundamentally the stories that excited me.” But, he adds, “they weren’t necessarily profitable.”

The majority of videos and stories on popular mountain bike websites are tailored for an audience whose expectations lean toward shorter, less immersive content. Hague had been losing interest in these media platforms for some time and began to nurture an idea for his own website where he could tell deeper stories.

He missed living in an adventure-culture town, so he began the process of moving back to Canada. After a two-year struggle to get a visa (prolonged in part by COVID-19), he reunited with his Canadian partner on Vancouver Island in 2020.

In the summer of 2021, Hague launched Gnarrative.com, a website devoted to documenting the unsung, unheard stories and personalities from the mountain bike world. It was also a place for him to share his photography with both a Canadian and international clientele.

He says his venture has sparked a chain reaction, adding, “I’ve been a bit overwhelmed by what stories I’ve uncovered or how willing some people have been to open up. It’s quite something.”

Stories like Tom Walker’s. He’s a mountain biker who was told after a gnarly crash he’d never use his legs again, but defied the prognosis by hopping on an e-bike even before re-learning how to walk. Or the tale of trail builder JP, “a dirt-loving scoundrel” whose self-described motivations include “bucking trends and doing some new shit.”

As any publisher knows, creating a profit from literature is a tough business. Advertisements are one way to go. Hague, however, doesn’t want to have brands plastered all over his site “because it may lose its identity a bit.” He admits, however, “It’s a tricky line to cross.” As an alternative, he’s set up a donation tab on the site.

That said, it’s the connections he makes, and not the money, that are important to him, and he hopes “to inspire just a few people out there. I’m not really concerned with pleasing everyone. If I can engage well with a few people, that makes me more satisfied.”

As for the future, he says he’ll keep sharing stories, and that he appreciates the people who reach out with positive things to say about them.