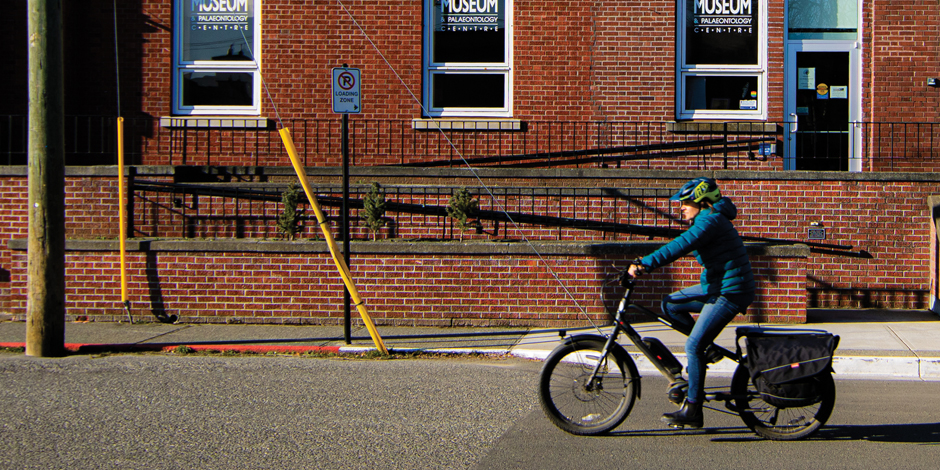 How many times have you thought about how nice it would be to drive less? Maybe you want to reduce your carbon footprint, or you don’t want to sit in traffic, or you want to get more exercise and fresh air. However, the idea of biking to and from work or errands seems too hard, even overwhelming.

Imagine I told you there was a way that would make it feel like you consistently have the wind at your back, even when it’s blowing towards you. A way that biking would become easier. That you could run errands, take young kids along with you, carry a family’s worth of groceries, and do longer trips.

All of this is possible with an e-bike.

With rechargeable, increasingly lightweight batteries, e-bikes look poised to change the way we get around our communities. While it has been estimated that there are already 120 million electric bicycles in use in China, they are still only just beginning to be a common sight in Europe and North America. But they’re catching on like wildfire in the Comox Valley. “We’ve seen a doubling of e-bike commuter sales over the last four years,” says Jon Rankin at Mountain City Cycle.

It’s a similar story at Comox Bike Company, where Craig Harris says that e-bikes already account for roughly 25% of their commuter bike sales. At first, it was largely the over-50 crowd embracing the e-bikes, but recently there’s been an uptick in sales to younger commuters, and Harris expects that this trend is here to stay.

Electric bicycles come in a number of different shapes and styles. There are full-suspension electric mountain bikes and commuters that look much like regular bikes with just a small, discreet motor somewhere on the frame. Dutch bakfiets have a long wheelbase and a large, wheelbarrow-like bucket. There are also mid- and long-tail cargo models, like Steve Russell’s Radwagon. The Cumberland bike enthusiast regularly commutes to Courtenay on his, and also used it on a multi-day family bike trip from Cumberland to Quadra Island and the Sunshine Coast.

Although it seems like a new invention, the e-bike idea has been around for a long time. The first US patent for one went to Ogden Bolton Jr. in 1895 for his battery-powered bicycle, followed a couple of years later by Hosea W. Libbey, who registered a patent for an “electric bicycle” propelled by a “double electric motor.” More recently, American car icon Lee Iacocca got in on the electric game when he founded EV Global Motors in 1997, but the company’s e-bikes didn’t capture the public’s imagination at the time.

These days, most commuter e-bikes have a traditional bicycle frame with pedals and a small, 400- to 500-watt motor which can produce a maximum speed of 24 to 32 km/hr. The motor is used to assist with pedaling when needed, not replace it.

Studies have shown that e-bike riders go on longer rides and spend more time on their bikes. The pedal-assist makes it possible for less physically fit people to feel the joy of riding a bike, smooths challenging topography, and reduces the sweat involved in getting to work.

Melanie McCollum says her Benno e-bike saved her family from buying another car; the bike’s easily adjustable fit means her husband Jamie can use it when she isn’t riding it. She notched over 6,000 km in her first 18 months riding between home, her work at North Island College, and her position as a Courtenay city councillor.

For myself, it is currently an idea, a dream, to ride with the lightness of the wind with four bags of groceries loaded onto an e-bike. I see e-cyclists around town and envy their ease of biking around the community. Soon, I say, an e-bike will be mine.