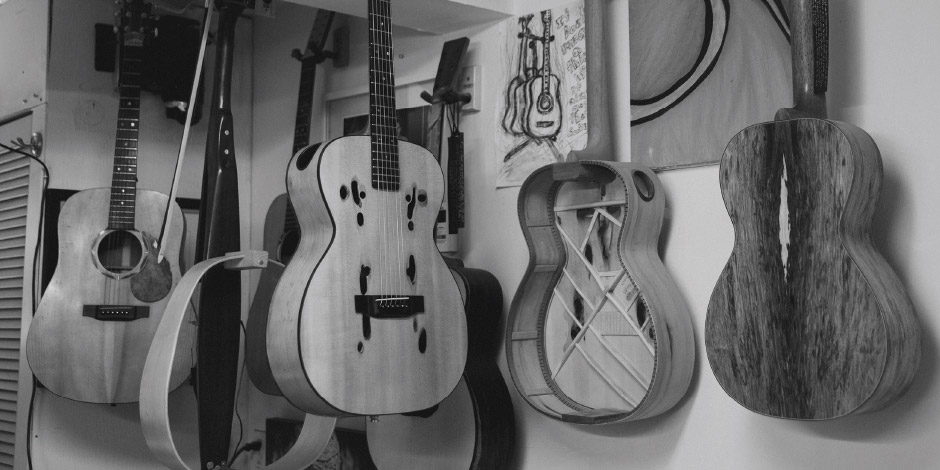 We all have a virtual playlist running through our minds that gets us from one day to the next. Music can inspire and motivate, it can lift us up, or ground us and it can evoke memories both happy and sad. My life’s playlist is somewhat “guitar-centric”: Croce and Lightfoot for those melancholy moments, Neil Young plugged in for when I’m feeling punchy and east-coaster, Matt Mays for those times when I need a dose of Canadiana.

To some, a guitar is no more than 6 (or 12) metal strings on a piece of wood but in the hands of a gifted songwriter and musician, the guitar is a tool to convey emotion, start a movement, and tell a tale. But what if the guitar was the story and could move you to make music before you ever picked it up and strummed its first chord?

I had the unique opportunity to have coffee one Sunday morning with Reuben Forsland, the Luthier behind Joi Guitars. Reuben has earned the reputation of crafting visually stunning and exquisitely sounding guitars, using rare and storied woods. Incorporating unique and exotic materials into every instrument he makes. He recently gained international notoriety when he was commissioned to craft a guitar for Grammy Award winner and rock and roll hall of famer, Slash.

Those who make musical instruments have always intrigued me. Reuben’s passion to create a niche guitar market is ever apparent as he sorts through exotic woods pointing out details in the grain and differences in their resonance and tone. Reuben tells me that he makes his guitars from wood and organic materials that tell a story”. A 3000 year old Sitka spruce, a famed piece of mahogany aptly named ‘TheTree’ and Toredo beetle infested boom logs from the ”heyday’’ of coastal logging. He is an innovative visionary, whittling whalebones for tuning buttons, abalone for pick guards and silver threads for sound hole rosettes.

Reuben’s life story could have been the inspiration for a ninety’s rock video, only he didn’t end up a lead singer in a punk band. He was born in Calgary and then lived in the nation’s capital during his teenage years. At age nine he collected bottles to raise funds to allow him to buy his first Yamaha guitar at a garage sale, with enough money left over for a year’s worth of guitar lessons. After moving back to Alberta, he worked as a carpenter, fabricated skateboard decks and manufactured his own kiteboards. It was his passion for kiteboarding that eventually brought him to the Comox Valley in 2008 and since then has been crafting his highly sought after guitars.

There is an air of eccentricity as Reuben wends his way through his plans for the upcoming ‘One Tree’ project, held at the Robert Bateman gallery this fall. Reuben’s collaborative use of a 150-year-old maple tree with local first nation’s artist, Karver Everson will be presented. He has a quiet confidence when discussing his guitars. He mentored under a Luthier for a brief period of time but he is mostly self-taught which has allowed him to be innovative and experimental, as he’s honed his skills. Working in a craft that is steeped in the use of traditional materials and methods he’s not afraid to consider repurposing reclaimed lumber, broken skateboards and salvaged driftwood.

As I leave Reuben strumming one of his guitars and back down his driveway, I recalled the legend of the late BB King’s Gibson guitar that was named Lucille. In 1949 while playing in a dance hall in Arkansas a fire broke out as a result of two men fighting over a woman. After realizing his beloved guitar was left inside the burning building, he of course had to run back inside to save it. Now I’m not sure if that dance hall is still standing or if anyone other than BB King graced its stage, but I can’t help but smile imagining if Reuben were to make a guitar from its remains the stories that guitar could tell. 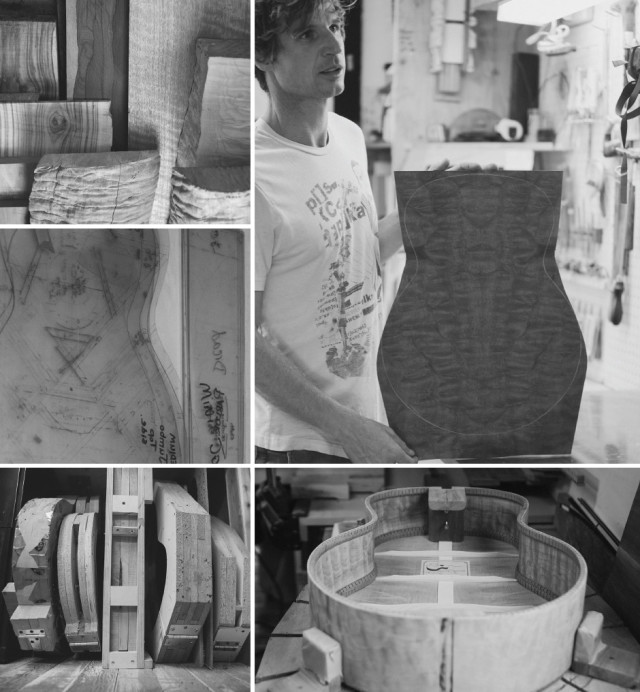