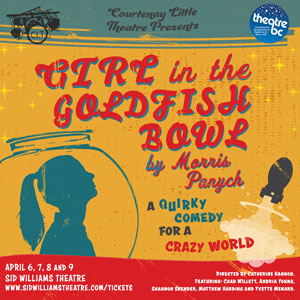 A comedy set in October, 1962, during the Cuban Missile crisis, Girl in the Goldfish Bowl tells the story of the last moments of childhood for Iris, a wise, irrepressible ten year old, who is trying to navigate the domestic crisis of her parents’ crumbling marriage even as the entire world teeters on the edge of nuclear war. When a mysterious stranger who closely resembles her beloved dead goldfish appears, Iris hopes he may be the answer to their problems. Set in a boarding house in a cannery town near Vancouver, this Governor General’s Award-winning comedy follows Iris’ journey full of hope, heartbreak and halibut with a quirky blend of humour and compassion.