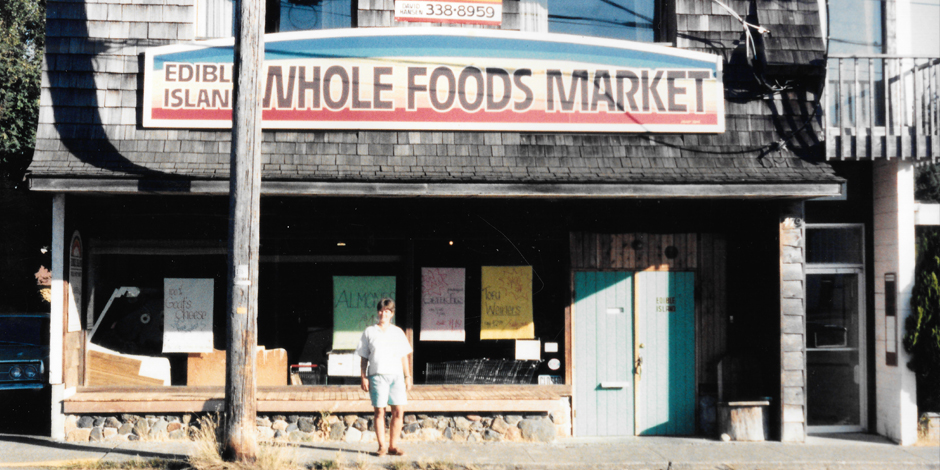 FED UP NO MORE

Edible Island and the evolution of alternative eating in the Comox Valley.

We got together in the living rooms of cabins, converted barns, half-finished homemade houses. We ate date squares, drank herbal tea, and caught up on the local gossip. And then, pencils and wish lists in hand, we created a master list. The idea was to end up with case lot orders to get the best prices.

It was an exercise in compromise: “What do you say I take an extra ten pounds of organic Thompsons to make up the 25-pound case, if you take 15 pounds of oats?”

Eventually the order was completed, cheques and cash handed over, and our master list was added to those of the other “houses” (subgroups) of our buying club and sent off to Vancouver. A couple of weeks later the food arrived, and members of Glacier Fed Food Co-op came together once again, this time to unload the truck and divvy up the orders.

This was the 1970s. This was the Comox Valley. This was a time when waves of young people swept across Canada and the United States to settle in the small towns and rural areas of BC.

This was also a time when large grocery stores were sad and barren places.

Everything was packaged to death. Very little unprocessed food was available. Organic was virtually unheard of. If you asked for miso, tofu, brown rice, nutritional yeast, even yoghurt, all you were likely to get was a puzzled look from store clerks and managers. Some of these items could be found at local health food stores, but those businesses were all about vitamins and supplements. Any actual food they had was in tiny packages and sold at sky-high prices.

If you wanted wholesome, organic, unpackaged food, you grew it yourself, purchased it direct from local farmers like Annie and Frank Strong, and/or joined a buying club.

By the mid-’70s, most communities had buying clubs. Some were small. Others, like Glacier Fed, were much larger, with many houses consisting of six to twelve families. Abandoned goat sheds and covered porches became improvised food storage and distribution centres. Roberta DeDoming’s leaky Denman porch was one of these. She remembers being “plagued by images of rain dripping into sacks of oats and millet,” while taking little comfort from her husband’s attempt at reassurance. “It’s not a problem,” he said. “It only leaks when it rains.”

In order to improve their buying power, some forty or more buying clubs from across the province got together and formed the Fed Up Food Co-op. It had a warehouse in Vancouver that bought the food from wholesalers and producers and then loaded up the orders and sent them out. There was a paid manager, but most of the work was done by volunteers who came in from the buying clubs for week-long stints—not a minor commitment. But as Susan Holvenstot, who would go on to become one of the founders of Edible Island, pointed out, this wasn’t just about food. It was political.

“We were ‘fed up’ with the multinational giant food industry. We formed buying clubs, and consumer food co-ops like East End in Vancouver and workers’ co-ops, like. Wild West Organic Produce (a women’s collective).” There were other co-ops like Vancouver-based CRS Workers’ Co-op, with its bakery, fruit cannery and wholesale business, and PSC in Victoria. “We attended conferences, ran workshops on democratic management and networked with other ‘whole foodies’ up and down the coast.”

Soon Fed Up was encouraging the creation of local distribution centres. Edible Island (which many people referred to simply as “Edible”) was set up to be one of these. It was a clean, dry warehouse in Merville where orders could be unpacked and distributed to the various clubs. However, Edible had barely opened its doors when it began to change and grow.

With a $5,000 investment from her father, Susan, Bruce Gongola, and I turned Edible into a workers’ co-op wholesaler. We built shelving, a cooler, and an office. We bought a truck. Soon we were supplying all manner of buying clubs, restaurants, grocery stores, and tree-planting outfits, from Lasqueti Island to Port Hardy. We hired more worker/members.

Within a year, we were also selling retail. This led to the unintended—but in hindsight, inevitable—demise of the local buying clubs as well as most of the local health food stores. (Why bother with all that ordering and organizing when you could just walk into the store and get what you needed at low prices?)

Edible specialized in bulk whole foods—grains, seeds, dried fruits, etc. It also sold tofu, miso, peanut butter, honey, ten-pound blocks of cheese, and yeast. We used local suppliers wherever possible. This included bread from Merville, granola from Dove Creek, produce from south of Courtenay, and even tofu/miso from Denman Island. If you didn’t want a 50-pound bag of buckwheat groats or an entire bucket of honey, you could bring your own bags and jars to buy what you needed.

By the early ’80s, Edible was selling organic produce. At first, we brought in truckloads of organic tree fruits from Cawston in the Similkameen Valley, but soon we offered a full range of vegetables and fruit.

It took a while, but eventually the large grocery stores began to catch on. They started to sell staples in larger quantities and installed bulk bins. Edible responded by focusing on its retail business, moving from Merville into Courtenay, and carving out a niche for itself as a supplier of organic foods (especially produce).

Today the food scene in the Valley is vibrant. The large grocery stores provide a wide variety of foods, including organic produce. There are high-quality bakeries and restaurants. Organic meats, tree fruits, berries, and vegetables are available from the dozens of farms throughout the valley as well as at the farmers’ market (an institution that transformed the food scene in its own right).

But it’s worth remembering that it wasn’t always like this, that there was a time not so long ago when quality bulk and organic food was virtually impossible to come by. If today we are awash in real food, it is partially thanks to the loyalty of early Edible Island customers, the commitment of its workers, and the herbal-tea-drinking determination of those early buying-club members.

Michael Redican lived in Merville for 25 years and helped to found Edible Island. These days he can be spotted on Quadra Island, where he writes, bikes, and helps to run Old Farm Community Garden.