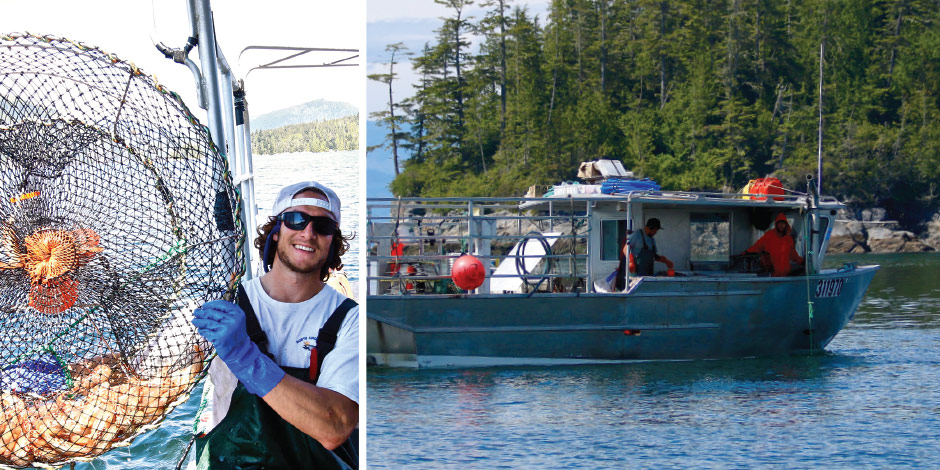 One of my crewmembers refers to spot prawn fishing as sea gambling, and in many ways it’s true. Our industry is connected to nature, making it hard to predict our annual harvest, so each season is a gamble. With international demand dictating prices that can change dramatically from year to year, for better or worse, and changing government regulations imposed on our fishery, we never really have a firm grasp on what’s in store for the season ahead.

Six years ago my partner and I decided to move back to the Comox Valley and become spot prawn fishers. The two of us have a connection to the ocean, having been raised in Comox, and are conscious of both the life it breeds and the effects it has on the community it borders. One of the reasons we chose fishing as our career is to supply our community with locally harvested spot prawns. We believe that connecting local communities with seafood harvested off the coast of BC will positively influence the decisions people make that have an impact on the ocean; thus keeping the ocean clean and fishing practices sustainable.

In writing this article I realized that I knew very little about the origins of the Pacific spot prawn industry in British Columbia. As many readers know, Comox in the 1980s was booming with young fishermen, one of whom was my partner Joel Nagge’s father. Today, we are some of a few who’ve chosen to make fishing their career. Despite the commercial fishing industry’s downturn, due to low fish stock levels and increased fishing restrictions imposed by the Department of Fisheries and Oceans Canada (DFO), I see a bright future. In my experience, fish stocks are actually increasing due to the DFO’s efforts to reduce harmful fishing practices. Joel and I choose to operate in sustainable fisheries—ones with low impact on the ocean’s ecosystem—that are highly regulated by the DFO. Examples of sustainable fishing techniques are: long-line/hook, trolling, and trap fishing.

In a report published by Asia Pacific Environmental Exchange (APEX) in 2001, (Mormorunni, 2001) as of 1999, the Canadian commercial spot prawn fishery had been operating for approximately 86 years (101 years as of 2016), pre-dating our neighbors in Washington by 60 years and Alaska by 30. Today, spot prawns are fished commercially all along the northwest coast from Alaska to California.

The early 1990s saw an increase in international demand (primarily from Japan) for spot prawns. According to the APEX report, in 1999, 3.1 million pounds of spot prawns were harvested off the coast of BC. This increased demand put pressure on spot prawn stock levels, and in 1994 the DFO implemented restrictions. Some of these include: trap size, number of traps allowed per vessel, number of times each trap can be hauled in a 24 hour period, and the opening and closing of fishing areas. In 2015, the spot prawn fishing season started on May 9th and ended on June 23rd.

Another way that the DFO controls the harvesting of spot prawns is with the use of the Indexing and Management System. Throughout the prawn-fishing season each boat is boarded by an indexer—a person contracted by the DFO to sample the catch and determine the biological status of the prawns. Indexing is done by collecting the prawns in every second or third trap on the fishing line as they are hauled on board. The trap type is documented and the prawns are segregated according to life stage, counted, and weighed. The number of females, males, and transitionals (prawns in the mid-stage of their life cycle) are compared to a biological reference point called the Spawner Index, which is used as a guide to implement fishing closures.

Once one fishing region is closed, the boats in the closed region move to the open region. This migration puts more pressure on the prawns in the open regions near the end of the fishing season. Other factors affecting the success of the spot prawn are: water temperatures, fishing during spawning (January – April), modification to their habitat/ intertidal areas, and a reduction in food supply- all of which are influenced by humans.

International demand dictates how we process the spot prawns in order to create the most saleable product. Product types include: frozen-at-sea (FAS), fresh landed then frozen (at a processing plant), and fresh and live. Both the FAS product and the fresh landed and frozen product are finger packed. This is a specific packing technique; the heads remain on the prawns, so the technique requires them to be dipped in a preservative sulphite solution, laid in the same direction with the antennae tucked, and packed in a 1kg box. Japan is the primary market for this product, buying approximately 90% of the spot prawns harvested in BC (Mormorunni, 2001). Local consumers prefer spot prawns sold either live or tailed and frozen, and those sold locally aren’t dipped in a sulphite solution. One of the challenges Joel and I face is how many pounds of prawns we process for our local market and how many for the international market.

I understand the importance of the Japanese market; without it Joel and I would likely be out of a job. Despite our reliance on Japanese demand for spot prawns we would like to see an increase in local demand. It’s shocking that the larger grocery stores in the Comox Valley only sell farmed prawns, raised in ocean-harming pens throughout Asia and South America. This switch, one type of prawn species for another across the Pacific Ocean, is harmful to the environment. One of the ways our company is trying to increase local spot prawn awareness is by selling them at the Comox Valley Farmers’ Market (CVFM). During the fishing season and into the summer, Kella Newson from Vancity Seafoods sells our prawns at the CVFM and we are grateful to have her.

You can also find spot prawns during the fishing season in local restaurants and at the BC Shellfish Festival in Comox. There is certainly an increase in consumer awareness and demand for the spot prawn. As a fisher, it gives me a great pleasure to know that people love and will go of out of their way to find them. I’m not surprised that as more people learn about spot prawns the local demand increases. They are organic, larger, and taste sweeter than a tiger prawn—a true delicacy.

Our next project is to develop a community supported fishery (CSF) in the Comox Valley. The CSF project has connected us with some inspiring organizations such as This Fish, and Local Catch, both not-for-profit organizations working to connect fishers with fish consumers. We hope to sell our first catch shares this spring before the 2016 spot prawn-fishing season. The benefit of selling shares of our catch before the fishing season starts is that we can determine how many prawns to process for the local market and how many to process for the international market.

I’m proud to be a Comox Valley fisher. I am optimistic about the future of the spot prawn industry, both internationally and locally. Joel and I might be suckers for sea gambling, but we are equally invested in connecting local people to spot prawns caught in local waters. As a young person operating in the fishing industry I have a duty to work with the DFO to maintain sustainable fishing practices. I hope that after reading this article you will go out and eat some spot prawns, get some at a local market or the Comox Valley Fisherman’s Wharf, and connect with a fisher. It’s a part of our local history and one way you can connect with the ocean.