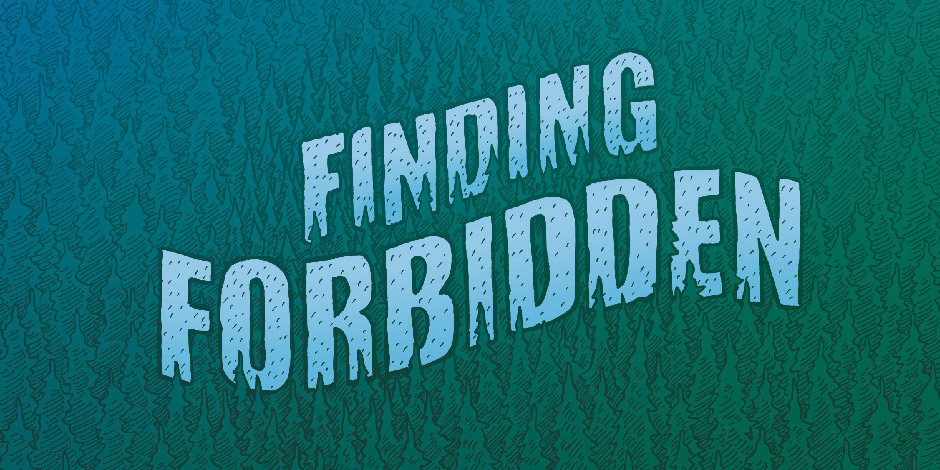 Separating truth from fiction in the Comox Valley’s back yard.

There may be no finer view in the Comox Valley than the one from the top of Mount Becher in mid-winter. On a perfect blue bird day I trek up the old ski hill slopes to admire it. With climbing skins glued to my skis, I grip and slide through five centimetres of fresh snow, the low angle sun reflected in each flake. I follow the well-defined path, gaining elevation quickly to near the top of the ski hill, gradually through open forest and a final stiff push onto the summit. As a reward, the high peaks of Strathcona Provincial Park join the Strait of Georgia and Coast Range creating a 360-degree, ocean-to-alpine view.

But today it’s Forbidden Plateau that catches my attention. The rambling terrain between Becher, Mount Albert Edward and Mount Washington looks anything but forbidding.

As I munch a granola bar and enjoy the view, I try to image a face in Mount Washington’s shape. I once read a ski magazine article about Washington, claiming its name is related to the mountain’s resemblance to the profile of the first president of the United States. Its namesake was actually a hydrologist in the British Navy and he didn’t look anything like long ridgelines. I wonder how many people believed the article. Then I consider what I know about Forbidden Plateau.

Like most people, I’d heard the K’ómoks First Nation “legend”. A long time ago war was brewing for the K’ómoks. The men sent the women and children to Forbidden Plateau to hide. They were never seen again; all the men found was red-stained snow. The culprits were either an unknown tribe of wild humans or a band of Sasquatch. Either way, the plateau became forbidden. I also read local author John Bindermagel’s North America’s Great Ape: The Sasquatch. In it, he notes several sightings around Forbidden Plateau.

Today, I’m pretty sure the only giant tracks I see are from snowshoes. I pack up and pull the climbing skins off my skis, pondering the Mount Washington article again. I think about how easy it is to fabricate history. How a well-told fiction can become fact. How quickly Facebook posts become truth. How myth morphs into history through retelling. Maybe I should be more skeptical. Carving turns towards the ocean I decide to look into the legend of Forbidden Plateau.

“You know the story of the red snow is made up, right?” It’s the first thing out of Pat Trask’s mouth when I tell him I want to know more about the name of the plateau. One of the curators at the Courtenay Museum, he leads me upstairs. “They wanted to get more people to go to some cabins up there,” he continues. “It’s human nature to want to go somewhere that’s ‘forbidden.’” His bushy eyebrows jump above his reading glasses as he says this. “Now it’s part of popular culture. People believe what they read.”

Trask leads me to a 20 centimetre-thick leather bound binder. History of Forbidden Plateau 1920 to 1986 is carved in the cover. It was compiled by Ruth Masters, a tireless historian and environmentalist, along with other binders on the Comox Valley’s veterans and pioneering history. I start flipping through the pages. The first news items are about exploration trips onto the plateau in the early decades of the 1900s.

Trappers and adventurous residents would occasional wander that far, but it was mostly prospectors.

The plateau remained little known until the dry Comox Valley summer of 1924. At the time, Courtenay piped its water from the Browns River. As the river dried to a trickle, the town sent Clinton Wood, waterworks engineer, to investigate damming a lake in the headwaters to secure year round flows. He never found a lake, but he saw another opportunity in the abandoned prospector cabins and rolling terrain.

“So entranced was I with the great beauty of this sub-alpine country that I made up my mind that the general public should be made aware of its great potential as a drawing card for the district and as a great recreational district for all, especially if it could be made a bit more accessible,” Wood wrote in a book published in 1967. “I was Secretary of the Board of Trade, and had the idea that a bit of mystery added to the obvious attractions would help to publicize it. I wrote a small article to the Comox Argus.”

Just as the Courtenay River begins in part with a trickle high on the plateau, Wood’s small article opened the gate on the legend.

The first mention of Forbidden Plateau that Ruth Masters could find comes from the headline of a 1927 article in Vancouver’s Province newspaper, written by Ben Hughes, the first editor of the Argus newspaper. A spinner of yarn and fact, Hughes drew from the accounts of Dr. Robert Brown, whose 1864 expedition on Vancouver Island was one of the first by a European. After touring around the valley Dr. Brown wanted to head up the Puntledge River to Alberni. He went without a guide, and wrote, “…having failed to persuade any natives to accompany us, the fear of the vengeance of the Schahts (sic) and Opecheshts (sic) being too great and the attraction of the salmon fishery now commencing too strong for them”. In the Province article Hughes wrote, “…whether their fear rose from a taboo placed on the region by the sorcerer of the tribe, or whether it was fear of the legendary foe, it is difficult to say.” Masters notes that Hughes was “a great man at making up stories”.

The promotion efforts worked. Wood ran horse packing and hiking tours on the plateau for decades, linking cabins at Kwai, Mckenzie, Croteau and Becher. A couple years after the first articles the province traded a chunk of land in the Cowichan Valley to expand Strathcona Park to include the plateau. By the 1930s, parties would leave Courtenay and Cumberland on Friday afternoon, drive to Bevan to cross the Puntledge River and then hike into the night more than 10 kilometres to the Becher Cabin. Eventually, the winter trips resulted in the building of Forbidden Plateau Lodge and the Wood Mountain Ski Hill, founded by, yup, Clinton Wood.  But just because Wood and Hughes fabricated the name doesn’t mean there haven’t been a few mysterious events on the plateau. Many hikers and adventurers disappeared in its convoluted terrain, including a woman last year. The epicentre of the most powerful, on-land earthquake ever to shake Canada was on Forbidden Plateau. And the Forbidden Plateau Lodge burnt to the ground twice. Combined with the “fear” Brown noticed in the K’ómoks, it all leaves me wondering.

So, I call Andy Everson, a member of the K’ómoks First Nation with a Master’s degree in Anthropology. “In my research I’ve seen no mention of Forbidden Plateau,” he says. “There’s nothing about a taboo about going up into the mountains. But there is probably some kernel of truth. There was a lot of warfare in this area. We were attacked from the north, south and west.” But the Nuchalnuth tribes from the Alberni Valley likely came via Comox Lake, not over Forbidden Plateau. And Everson sees no reason why the K’ómoks would ever go onto the plateau with so much to harvest in the valley. And especially not to hide.

“That’s a long way to go to hide when dense forest is everywhere,” he says. Instead, watchmen, stationed on the hill above Goose Spit scanned the ocean for marauding tribes. The watchmen would run to the village to sound the alarm and everyone would take shelter in a fort that once sat at the top of the Dyke Road hill leading into Comox.

Everyone’s info reinforces the fabrication. The deeper I dig, the less truth the legend seems to have. But it doesn’t take anything away from Forbidden Plateau. In fact, maybe the legend’s power says more about how special the area is.

“I think all stories change over time,” Everson says. “Even history changes depending on how we want to portray it. In oral tradition, as stories are transmitted over time, details change. It’s part of the life of a story.”