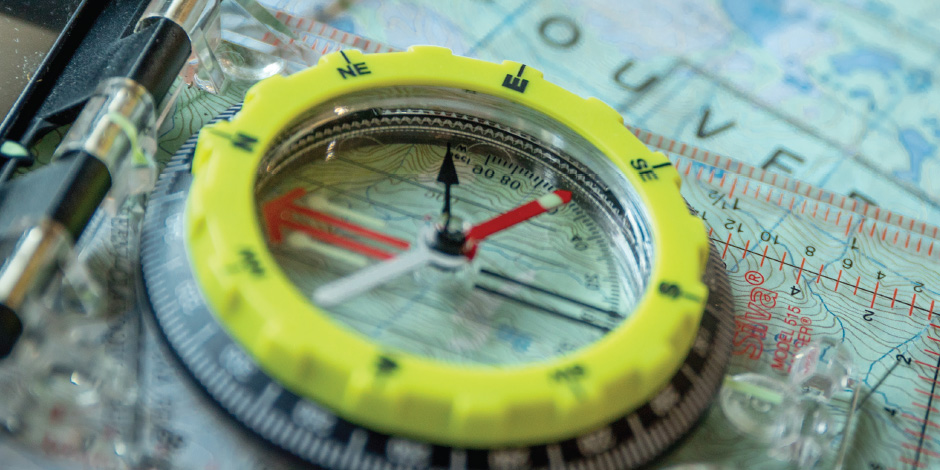 Finding our way: Learning lessons on the mountain

Navigation is integral to our daily lives. It’s not just for seafarers, mountaineers or explorers, but a learned skill that is used by most of us every day. Whether it’s planning a driving decision around construction delays or charging to the correct chair on a Mount Washington powder day. Intrinsic to navigation is being certain of your current position, paired with the ability to plan and follow a route. Otherwise, you’re lost.

I can vividly remember the first time I was lost in the mountains. It was on the way to Mount Grey, within shouting distance of Red Mountain Resort. The day had a heavy feeling to it. The coniferous arms were weighted down with snow like they had spent too much time in the gym that morning. There was no horizon, just a palette of grey on grey. I could see as far as my friend Al Fraser’s familiar bushy eyebrows caked with rime and his scraggly moustache with its ubiquitous dangling ice diamonds. Al, like me, a novice to alpine ski touring, had been up Mount Grey with others and didn’t think twice about going without the heavy hitters riding shotgun. Neither of us had acquired any hard skills like using a map, compass, or altimeter; we hadn’t done terrain analysis or avalanche safety training. Our older, wiser friends had those assets. Al and I could only add the supreme joy of shredding first tracks in the mountains to our resume.

That was the talk on the skin up, how fantastic the ski down was going to be, beating our friends to the virgin white, wondering if the descent conditions would allow us to see God. The skin up Mount Grey is a simple affair, keep Red Mount on your right, and stay on the wide, low angle ridge separating Kirkup Basin from Mount Grey. It should take 45 minutes, plus or minus. We gained the ridge from Rino’s Run and were overjoyed to be first. We did have a watch, yet couldn’t figure out why it was taking longer than usual to start the next uphill section. We both realized something was not quite right. That element of anxiety, of not really knowing our exact location or how to ascertain that location, coupled with the fact that someone else might be getting ahead of us, was forming a big, black, cloud of abstract thought. We couldn’t be lost, not on Mount Grey—too simple.

Theorizing that it was lack of visibility and trail-breaking slowing us down, we plodded on. Fifteen minutes later we came across what looked like a fresh skin track. Thinking we had been slightly off-route and someone had now beaten us to first tracks, we morosely set off on this skin track. At least the tension of being hypothetically lost was broken. Ten minutes later we still hadn’t started the uphill section we were expecting. The big, black, cloud was back and starting to anvil out at the top. Coupled with anxiety was anger at our self-induced dilemma. But, praise the Lord, we came across a recognizable landmark. It was here that the skies metaphorically cleared and in unison we realized our folly. We had completed two laps of the same circuit, both going nowhere except in a circle. We recognized the spot, as we had taken our packs off, had a splash of water, and a pee. Very visual.

The relief of knowing our location brought out a couple of sheepish grins followed by outright belly laughter. We had become disorientated in about 200M, by 100M of treed, horizontal terrain. Since that day 34 years ago, I have been lost a few more times. With more experience, the trips became more complex and the range of emotions ran deeper. From simple tension on Mount Grey, to the sheer terror of being off route on the Bugaboo Spire, in the dark of a lighting storm, lifting the prayer “I will be good if you let me out of this situation whole.”

Being lost or disorientated is part of the process of learning to navigate. So is practice. I’ve poured over my vast collection of 1:50,000 topographical maps like others would their pornography collection. Wondering what if, how long, and has it been done before? I’ve been lost in the moment calculating trip times, slope angle, pencilling in route options, visualizing what the terrain looked like (long before Google maps) and best places for food drops. Even though I don’t get out as much, I still wonder what’s around the next corner and how to get there.