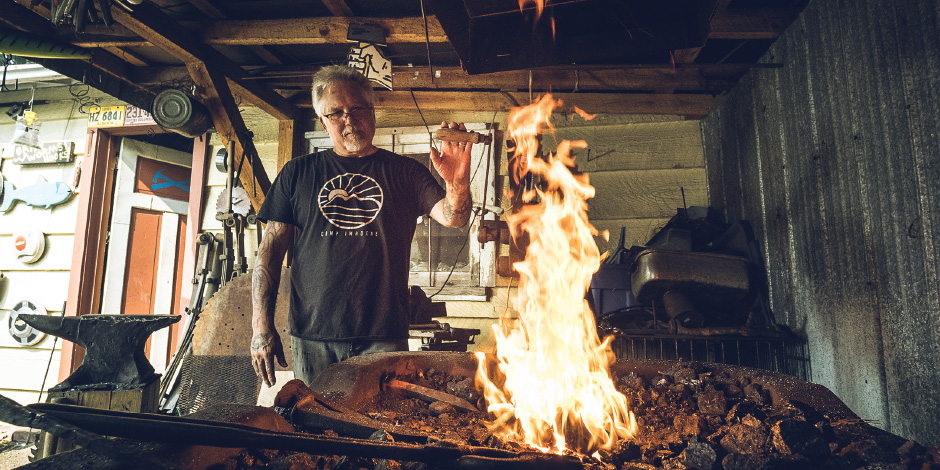 By his own admission, James Emslie has a knack for making modern things from other people’s discarded items. His Facebook page says he is a “maker of things all banged and sharp”. Inspired by a TV show and a natural curiosity to explore his own creative processes, Emslie, a hairdresser of 25 years, recently turned his attention to the age-old art of blacksmithing. In an improvised backyard workspace replete with forge, anvil, hammers, and all manner of discarded metal offerings, Emslie set about crafting useful, rustic and creative pieces from found metal.

“My son and I were watching a show on TV about forging and he was pretty excited about the process,” explains Emslie. “I then decided that hey, maybe I should build a forge so we could fool around on it. Build it I did, from an old semi truck brake drum and other assorted pieces of scrap, creating a coal burning forge.”

Despite no formal blacksmith training, Emslie was a natural craftsperson, “I close my eyes, see an object, see it in 3D, and then I can make that object”. By firing up the forge, burning coal­ sourced from an old coal loading site by the edge of the Salish Sea in Union Bay into coke — at approximately 1000-1200C — he softens the metal to stretch or manipulate it by hitting it with a steel hammer, before reheating in the forge and repeating the process.

Emslie often frequents metal recyclers, collects car leaf springs and sawmill blades, railway spikes, old wrenches, barn board for tea light candle bases, elk antlers, and other miscellaneous items to be put to possible use. He purchased his anvil from Craigslist in Kamloops and recently picked up another coal forge, this time from Merville.

His finished products are exquisitely crafted and entirely unique. They include distinctive styles of kitchen knives, paring knives, bottle openers, oyster shuckers, wall hooks and hangings, hanging pot and pan racks. “I try to work my pieces so they have a hand forged look and feel to them,” explains Emslie, “leaving them with a more rustic, just-worked appearance. This is important for me because we can buy everything shiny and brand-new in a store and I want my pieces to look perfect in their imperfections.”

Emslie uses Instagram, Pinterest, and Facebook to present his portfolio of creations. The images–colourful and full of artistic flair and taken by him on his smart phone–reveal the elegance, refinement, deep texture, and absolute individuality of his work.

“I think I am drawn to this type of creative design because of its seemingly unending boundary of possibilities,” he explains. “I usually feel pretty excited when I have finished a piece, as it is always my end goal to have someone else enjoy it once I’m done.” 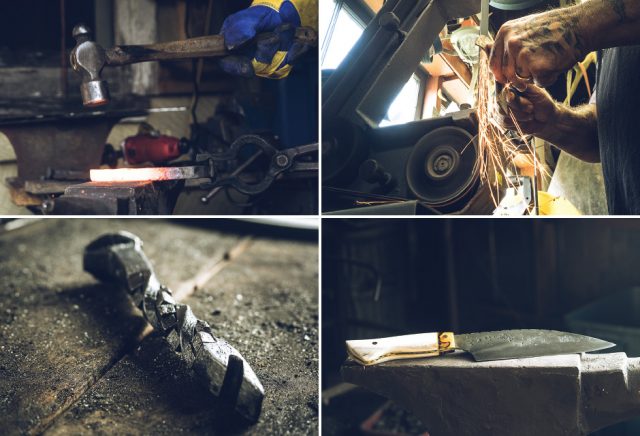