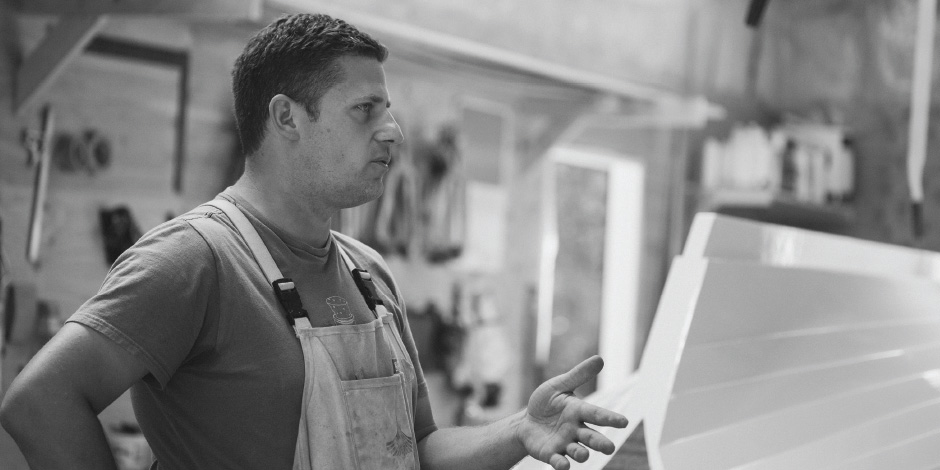 In the past I have waxed poetic about the beauty of wood; how it can be shaped, molded, and finished. But wood is fallible; it can check and warp, split and snap. I find it amazing how craftsman can transform a tree into a chair, a musical instrument, or—in this case—a boat. Boat building is viewed as one of the oldest branches of engineering. It is a craft that is steeply based in tradition. Like most crafts, boat building requires a balance of both creative talent and mastery of technique. So how does the son of a Saskatchewan farmer become a master boat builder?

Hilmark Boats was founded by Hilford Burton in 2001. Originally based in Campbell River, Hilmark was born from one man’s dream to leave a legacy behind for his children and grandchildren. His first boat was a reproduction of the famous Tyee Row Boat, aptly named after the fabled Chinook salmon in Campbell River. Catching the elusive Tyee, which is a Chinook salmon weighing at least 30lbs, must be done while trolling a single barbless lure behind a boat that is rowed or paddled. This is the only way one can fish for a Tyee and have his/her name placed on the registry of other anglers who have caught this legendary fish.

The Tyee Row Boat itself is surrounded by myth and lore. As the story goes, the first forms for the boat were lost in a fire or otherwise. All that remains are a handful of the original rowboats first produced by Painter’s Lodge, and the templates for the traditional spoon blade oars. When Hilford first reproduced the boat there were no plans to follow, so he took measurements from the famed rowboat that still sits upon the floor of the Maritime Heritage Centre in Campbell River.

In May of 2015, Mark Jakobsen purchased Hilmark after years of courting its former owner. Mark, who hails from Norwegian ancestry, tells me he has always been infatuated with wooden boats and maritime culture. Growing up in the prairies he speaks of trips to Prince Albert, Saskatchewan to paddle a beat up aluminum Grumman canoe in the lakes that abound in that area. In 2005, Mark travelled to Norway in search of his roots and he discovered that his Scandinavian heritage was staunchly connected to the sea, which further fostered his desire to follow in the footsteps of his Norse countrymen. When asked, Mark admits that prior to purchasing Hilmark, he had never made a wooden boat. But with a background in construction and cabinetmaking, he had no misgivings about the path he was embarking on. As if by design, the very first boat that Mark built was a legendary Tyee Row Boat. Thanks to Hilford, Mark is the only person who has the coveted forms needed to build this legendary fishing clinker. On the day I visited his shop, now located in Courtenay, Mark was finishing the biggest boat Hilmark produces: a 19’ 3” Newfoundland Trap Skiff. Yet another historical craft originally built to catch cod on the East Coast, which can be sailed or rowed.

Despite an overabundance of clamps of all types and sizes, noticeably absent from Mark’s shop is a large selection of tools. Although a large table saw, planer, and band saw sit dormant on one side of the shop, I am told they are only used to machine large planks into smaller planks. True to the craft, Mark uses primarily vintage hand tools to makes his boats. Chisels of various types, a small block plane, a trim plane, and a clinching hammer are used to bend and shape linear planks into a lapstrake vessel. But I am told that the most versatile tool on his bench is his familiar Carpenter’s Axe, which he uses for trimming, shaping, carving, and bevelling almost anything.

Building a boat using antiquated techniques when set against the backdrop of our modern day industrialized world seems rather futile. But Mark tells me that’s what his customers—mostly from Europe and the United States—pay for. Mark explains, to the best of his memory, an age old adage that tells us how one can build a boat made of wood using only a chisel, a saw, a hammer, and heart. There is a simple beauty in a boat that is handmade and handcrafted, it somehow sets it apart from its modern day, factory built equivalent, giving it a personality and a soul. 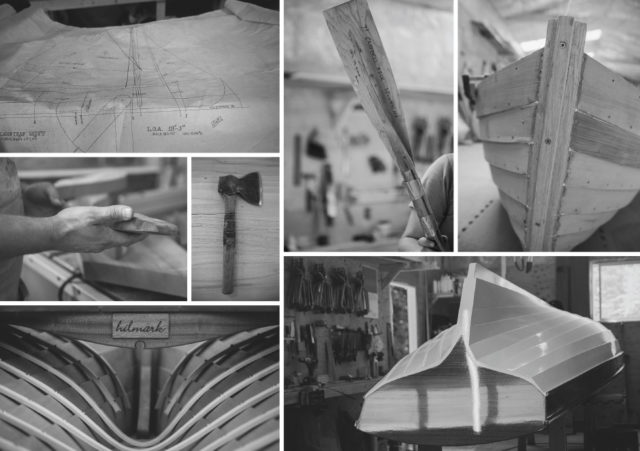