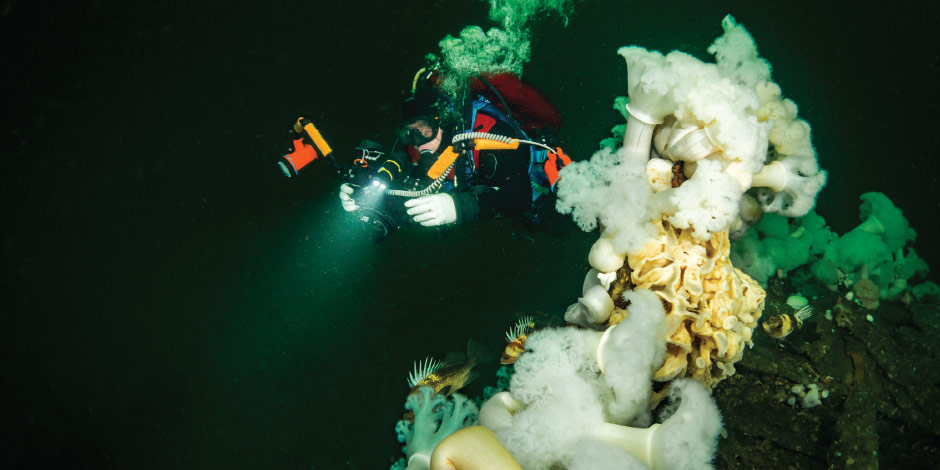 The tragic end & beautiful rediscovery of the SS Capilano.

Floating lazily in the glassy, calm waters of Shearwater Passage, our boat tied off to the mooring buoy, we get our equipment ready for an exciting dive. The setting is tranquil and relaxed, and I can’t help but wonder what this spot was like just over 100 years ago. In the early morning hours of Oct 1st 1915, a storm was brewing, both on the water and in the hearts and minds of the crew of the Capilano. A steamship for the Union Steamship Company, the “Cap” as it’s often referred to, was taking on water and foundering in the waters between Savary and Harwood Islands. In a desperate bid to save his crew and cargo, Captain Samuel Nelson steered his ship towards Campbell River. Taking on water at a significant rate, the ship began to list and the abandon ship call was made. The crew managed to safely get into the lifeboat where they watched their ship go down, its lights blazing in the dark.

Earlier in the evening, while cruising through Malaspina Strait, the captain retired to his bunk, leaving control of the vessel to the second mate. The ship struck an object, not enough to raise too many alarms, but of concern. The captain was roused and the order was made to put the Cap into the nearby Port of Van Anda on Texada Island. After a thorough inspection, nothing was found and it was assumed the ship was sound. The voyage resumed, only to be confronted with nasty seas and the imminent discovery that the crippled ship was taking on water. It was thought that whatever struck the vessel had become lodged in the steel hull and fallen out once rough conditions were met—sealing the ship’s fate.

Back in the lifeboat, the captain and crew watched the Cap do its last short journey—settling in 130ft of water on a relatively small, flat, sandy ledge at the edge of a reef. Sitting perfectly upright on the bottom, it rested forlornly, undisturbed for 57 years. With its storied history, including voyages to the Klondike Gold Rush, and transporting stone from the quarry on Nelson Island to Victoria for the BC Legislature Building, it lives on in dreams. Its name however, lives on in the form of another vessel that plied the waters around the Strait of Georgia under the banner of the Union Steamship Company. This vessel sailed until approximately 1949 and its copycat name has led to some confusion. Due to the era, not many photographs of the first S.S. Capilano are in existence, but plenty of the second are.

The first Capilano sat quietly at rest until 1972 when a local fisherman unwittingly snagged a piece of the wreckage. Subsequently, a dive was made to investigate and a historic connection to the past was discovered. I imagine the feeling of awe as the wreckage first came into sight on that first dive. Not unlike today, on our dive, the first thing to greet the descending divers would have been a massive white outline of giant plumose anemone. Covering the outside of the hull and lining the gunwales and edges of the compartments, these “cauliflowers of the deep” make an impressive first sight. Like the secrets it held for decades before it was discovered, the divers closely guarded the location of the wreck. Formally recognized as a historic wreck site in 1985, it’s now a popular site amongst local divers and a destination dive for those from farther afield. It’s located between Powell River and Courtenay, and accessible in good weather.

During the summer months, algae bloom in the Strait of Georgia and their nutrients feed a host of underwater life. The wreck structure gives the only foothold in the sandy bottom and is covered in life. Once we descend below the green water layer, visibility increases and the ghostly white outline of the ship becomes apparent, giving the first indication that this is a spectacular wreck. As we sink lower, large schools of fish become visible, hanging in the current between the descent line and the anemone-encrusted bow. Copper and quillback rockfish are everywhere and the minute I poke my head over into the ship’s compartment holds, the lingcod appear. Resting on any flat surface or piece of rigging, these giant fish sit staring.
There’s not much left of the wooden superstructure, it having rotted away over the years, but evidence of cargo from its last voyage is apparent. Most everything is festooned with life. Swimming towards the stern of the boat where the bridge used to be are magnificent clumps of cloud sponge amid plumose anemone. Hanging off the outside of the hull and perched in other spots, these structures continue to grow upon themselves to become a great nursery for little rockfish and other life. In other places, particularly on the structures in the hold, there are chimney sponges. These aptly named sponges stand out from the substrate and often host a sheltering rockfish or warbonnet. As well as being a nursery for young fish, it’s become a haven for the adults. With so many lingcod on the wreck it’s become a target for sport fishing, as evidenced by the snagged fishing lures on the wreck structure. Thankfully, there seem to be a lot of fish that avoid the anglers’ lines. When you look out into the dark waters beyond the wreck, you can just make out the shapes of large lingcod cruising over the sandy bottom.

After a trip around what’s left of the superstructure it’s time to end the dive. Meeting my buddy at the bow ascent line, I take a few final photographs of a rockfish that looks like a sentry of the wreck, nestled in a coil of rope on the bow davit. Leaving the wreck to its dark, lonely home we head back up into the ever brightening green ocean and board our small craft, floating on the surface that’s as still as a millpond.

Just after climbing aboard our boat, a small sport fishing vessel approaches. A friendly fisherman casually asks if there “are many fish down there?” Usually I brag about what I see underwater, but this time I’m a little vague.