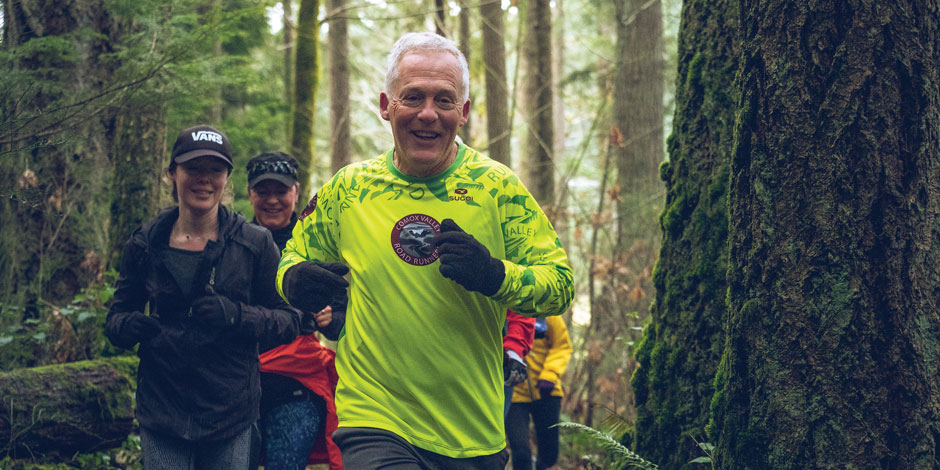 As well as a destination trail race, The Cumby is a fundraiser to protect the forest it winds through.

The 2014 annual general meeting of the Comox Valley Road Runners (CVRR) was winding down when something extraordinary happened. As chairs began to shuffle, a veteran runner raised his hand. He asked if there was an appetite for the club of road runners to host a trail race. Four years later, The Cumby is now an established BC trail race. It has raised $40,000 for the Cumberland Community Forest Society, and is one of its top five fundraisers. The Cumby is adding a shorter, family-friendly race this year for youth and walkers, in addition to the 25 km Full Cumby and 13 km Half Cumby.

The Cumby rides a wave of passion for all things trail running. In total, Vancouver Island has 15 trail races to choose from, with gnarly terrain and a variety of distances. The Comox Valley has four races, including The Cumby’s sister, Perseverance.

Cathy Butcher signed up for the CVRR Learn to Run Clinic the year she turned 50. 10 years later, she now belongs to a running group that has become an important part of her life. The group initially ran on roads, and then, as they exclaim gleefully, “we discovered trails.” As The Cumby approaches, the group often trains in the Cumberland Hills and enjoys a post-run Sunday coffee at the Wandering Moose. Group member Michelle Waite loves the technical aspects of foot placement and choosing her downhill line. This intense focus clears her mind of everything else. She describes it as “runners meditation,” grounding her for the week that follows. Another group member Karen Tobacca says that running in the forest gives her eureka moments. She knows that at least two people will show up every week to run, regardless of the weather.

12-year-old Owen Caldwell and his mother Melissa have been running together for three years. When asked who his training partner is, Owen proudly replies, “My Mom.” He is the youngest racer to complete the Half Cumby and is looking forward to improving his time this year. “The best part of trail racing,” he says, “is seeing the finish line and hearing the cheering.” He also likes bumping shoulders with local runners Clay Ward and Eddie Betinol, who he views as role models. Owen’s mom will once again race the Full Cumby and is also training for a 51km race in New Zealand—an impressive goal for someone who started running seriously only six years ago. Melissa knows that her son will be cheering at the finish line, and will one day compete alongside her.

33-year-old Kristy Lukewich started running only two years ago. In a successful bid to lose that last 10 pounds, she took up her boyfriend’s suggestion and joined the Learn to Run Clinic. A year later she completed her first marathon. She is now a clinic leader and will compete in the Full Cumby this year. Running has become both her passion and a life-changing habit. Kristy is fairly new to the Comox Valley and appreciates the social connections she has made through her running.

Ron Crowther, President of CVRR, is another graduate of the Learn to Run Clinic. He ran on roads until achilleas trouble sent him into the woods. He hasn’t looked back. At 63, he discovered his love for running downhill by chasing Lene Curts, a lost but never forgotten friend of the running community. Now in his fourth trail racing season, Ron is one of many locals who have embraced the challenges and joys of running in the mountains and forests of the Comox Valley.

The veteran runner who raised his hand four years ago is pleased. The CVRR has a trail race they are proud of, and he selects the course each year. Extraordinary indeed!