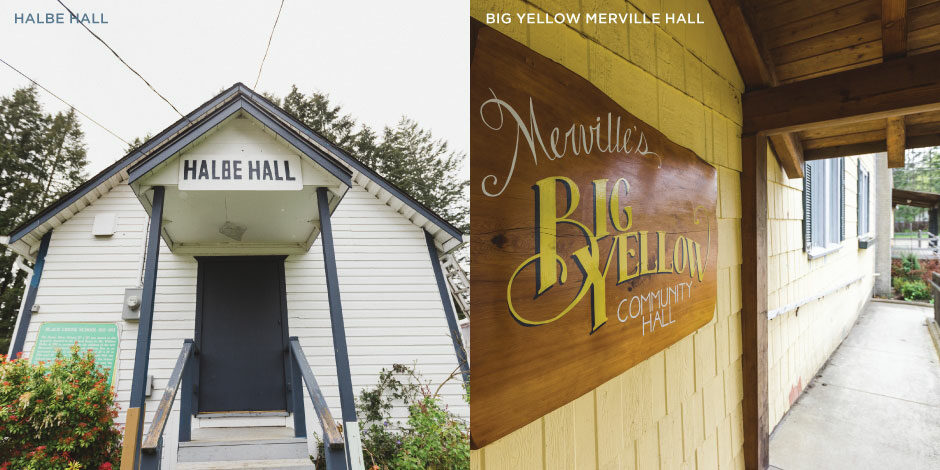 FROM CLEARCUTS TO COMMUNITIES

The Valley’s community halls have stories to tell.

If you’re anything like me, you’ve probably driven past the community halls north of Courtenay along Highway 19A many times without giving them a second thought.

But think about the times when these halls were built. When Black Creek, Merville, and Grantham were first established, roads were poor and transportation options were limited. People living here were isolated. They needed a place to gather, so community halls were often among the first buildings in a settlement.

These halls are part of our history.

This simple clapboard building was built in 1924 as the Oyster River School; it moved to its current location in 1932 to serve the area’s growing Mennonite population. This sounds simple—it’s only a few kilometres, after all—but what a production it must have been to move a 20’ x 20’ building along a bumpy road, using horses.

A logger named Bill Halbe donated land for the school out of the 100 acres he’d bought a few years earlier for $10 an acre. (Remarkably, he’s said to have cleared 45 acres by hand.)

The community eventually outgrew the school and the hall has been managed since the 1970s by the Black Creek old age pensioners group; new members are welcome for $15 per year. Back in the day, that would have bought young Bill Halbe 1.5 acres of land.

Merville was formed by the provincial Land Settlement Board in 1919 as a home for soldiers returning from World War I. The idea was that the veterans would establish farms—after they cleared the many massive Douglas fir stumps the Comox Logging and Railway Company had left behind.

Within three years, amazingly, many hundreds of acres had been laboriously cleared (dynamite helped) and a small village centre had developed that included a school, store, post office, church, and community hall.

Things occasionally got rowdy at the Merville Hall. Local Area C director Edwin Grieve, whose family arrived in the Comox in the 1860s, says that dances at would often end up in fistfights when the loggers from the Headquarters area would come in wearing their corks [nail-soled leather boots] and tear up the dance floor.

On the day I visit, the hall’s rooftop solar panels are soaking up the sun, and there’s a lively thwacking sound coming from inside the building, where two women are playing pickleball on the recently resurfaced floor. The parish hall is home to a colourfully furnished Montessori school for children under six. All of this would surely surprise the first settlers (as would the display panel listing all their names).

The original Merville hall is long gone now; volunteers built the current one in 1956, using wood from the Kitty Coleman area. Prior to the town’s centennial celebrations, a new group of residents showed their community spirit by refurbishing the hall and the three acres around it.

According to Land of Plenty: A History of Comox District, the area known as Grantham has been mainly a farming community since the early 1880s. A school was built on this site “prior to 1894 … on property donated by 1862 settler Tom Beech. As with most pioneer schools, Grantham School became a focal point for community activities;(sic) whist drives, wedding receptions, political meetings, and dances.”

The hall that stands in Grantham today bears the name of the Independent Order of Odd Fellows, a group founded in 1819 to promote “the principles of friendship, love, truth, faith, hope, charity and universal justice.” Two groups of Rebekahs, the female auxiliary of the IOOF, still meet here regularly.

The Dove Creek Community Hall, a cozy-looking wooden building dating to the mid-1940s, nestles under some large evergreens in an open green space just off Burns Road. It was originally called the Swedes Hall after the logger-farmers who built it, many of whom were Swedish, Finnish, or a combination of the two. According to Land of Plenty, the lumber for the hall was donated by R.J. Filberg, president of the Comox Logging and Railway Company. The Swedes paid the favour forward in the 1960s by donating the hall to the Dove Creek Women’s Institute.


I couldn’t write this story without acknowledging the problematic history of land occupation on Vancouver Island. I hope it’s possible to deplore the colonial system that took away land from Indigenous people while still admiring the grit of the people who came to this area—in some cases fresh from the trenches of World War I—and managed to build communities out of clearcuts. 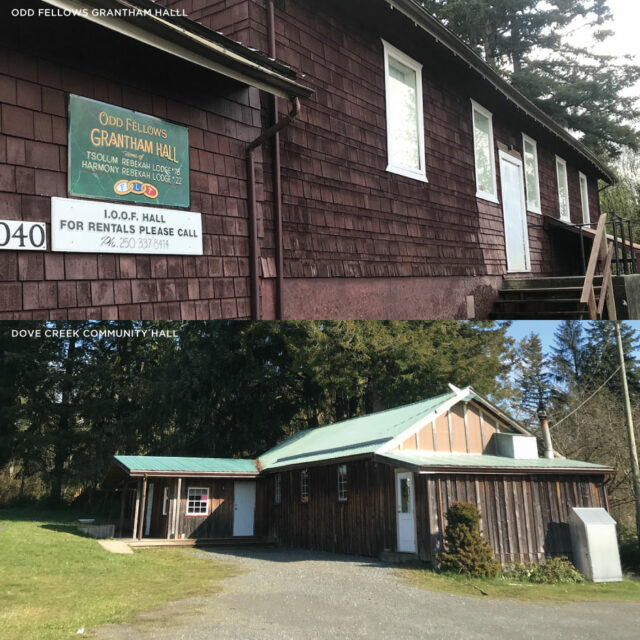