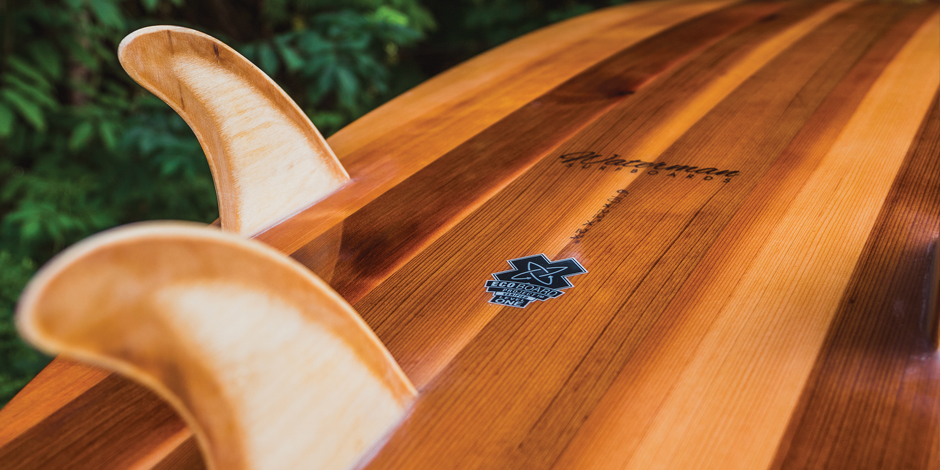 FROM FENCE BOARDS TO SURFBOARDS

When you first look at a Waterman surfboard, you wouldn’t expect it had been crafted by a guy who grew up on the prairies.

But every Waterman surfboard is handmade by Patrick Salamon, who grew up along the Yellowhead Highway, midway between the tiny towns of Bredenbury and Churchbridge, Saskatchewan.

At age 18, Salamon moved to Australia to live with his aunt. While working there as a housekeeper, he discovered his love of the ocean and learned to surf.

After returning to Canada, he found work as a plumber and carpenter, but his passion for the ocean never waned. For his wedding day, he shaped an alaia—a thin, narrow, flat-tailed wood precursor to modern-day surfboards—for guests to sign. It still hangs on the wall in the home he shares with his wife.

The alaia was the first board Salamon ever made. Some time later, the notion of Waterman Surfboards came to fruition as a way for him to marry his respect for the environment, his love of surfing, and his skill as a carpenter.

When his wife landed a job in Campbell River, Salamon felt he could satisfy his craving for waves with weekend trips to Tofino (“the Surfing Capital of Canada”). But one day, when he was driving south along the Island Highway on a stormy afternoon, he saw a handful of surfers paddling out in Oyster Bay, just south of Stories Beach. That was when this boy from the prairies knew he was putting down roots in the right place.

Perhaps not surprisingly, given its prevalence on the Island, he chose to make his hollow-core boards from cedar. In its most utilitarian form, this common, yet iconic, wood will keep animals in and predators out, sheath our walls, and keep the rain off our heads.

Yet cedar is clearly also well suited for surfboards, because it’s dimensionally stable, with a high strength-to-weight

Waterman Surfboards have a certain nostalgic feel, and Salamon explains that his use of wide cedar planks and contrasting colours is to pay homage to the cedar-strip canoes, inspired by Indigenous designs, that once dotted the lakes in Canadian cottage country.

The nostalgic feel comes partly from the fact that wood was the original material of choice for surfboards because it was relatively cheap, readily available, and could be carved and shaped with simple hand tools.

The invention of fibreglass during the Second World War revolutionized the surf industry, as shapers were able to create lighter hollow-wood balsa surfboards, then wrap them in a thin layer of fibreglass. Some time in the early ’60s, the movement to foam—which was lighter, cheaper, and easier to shape—allowed for the mass production of the modern-day surfboard. The charge was led by Clark Foam, founded in 1961, which, for many decades, would make most of the world’s foam surfboard blanks.

During those decades, the surf industry was often criticized for its use of petrochemicals, the relatively poor longevity of its product, and the limited use of both recycled and recyclable materials. Clark Foam ceased both the sales and production of surfboard blanks without notice on December 5, 2005, a day the surf community dubbed “Blank Monday.” Many surmised that the closure was due to imminent changes in environmental regulations regarding the use of polyurethane foam in surfboard blanks.

Since then, the industry has been on the lookout for enduring, renewable, and recyclable materials. Whether it was a resurgence, or a revival, the use of wood for surfboards ticked all of those boxes.

Salamon walks me through his process of crafting a hollow-core surfboard, which is similar to manufacturing a skin-on-frame kayak. The board has a similar structure to an airplane wing, requiring a rigid framework, or skeleton, that he’s already designed and laser cut from 1/8” marine plywood.

The decking and rails are made from red and yellow cedar, but Salamon rarely uses new lumber. He has built some surfboards from reclaimed timbers from construction sites, and some of his boards were repurposed from an old fence. Using a green, bio-based, epoxy resin, he is able to responsibly craft a sustainable heirloom that can be passed down through generations, and will never end up in a landfill.

“A second life with no end” is a simple goal, and one that Waterman Surfboards abides by with every hollow-wood surfboard shaped from repurposed lumber.