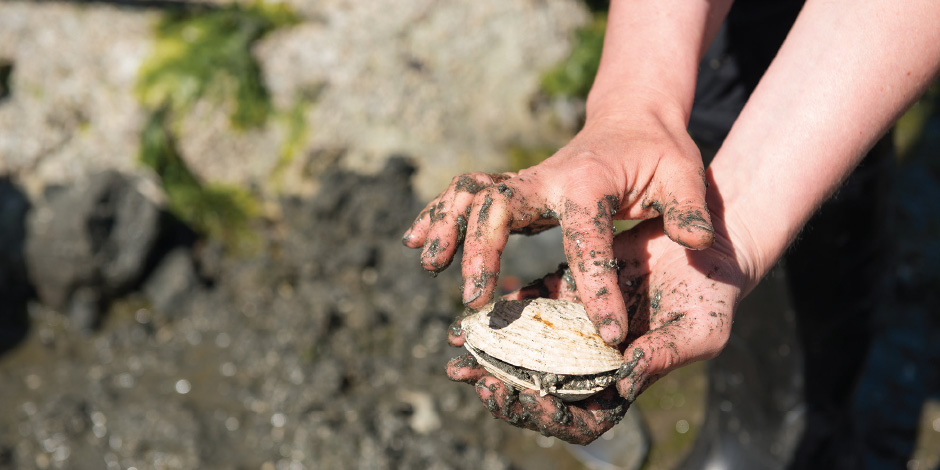 Full of life: Clam gardens in the Salish Sea

One of my earliest memories is on the beach. I am six years old and I am standing next to my dad who is digging in the sand. I stare, dumbfounded. What is he looking for? What treasures will he find? At last, his hand emerges, a small creature clasped gently between his thumb and index finger: a clam.

Ever since I was a young girl, I have been digging for clams. The many summers I spent at my grandparent’s home on Lasqueti Island are etched in my memory like shells fossilised in limestone. During the day my siblings and I scoured the beaches in search of Littlenecks, Manilas, and big, juicy Butter clams, and at night, we feasted. Most often our reward was a bucket of steamers doused in aromatic garlic butter with a sprig of dill. Twenty-two years later, I am back on the beach, searching for clams, this time as an Outreach Officer with Parks Canada.

CLAMS ON THE COAST

Clams have played an important role in the history of the Pacific Northwest. For thousands of years, Coastal First Nations people have harvested, roasted and traded clams. In his journals, explorer Hernan Cortez (1485-1547) recalls a “salty fig” traded by First Nations people for rare items such as rattlesnake’s venom and obsidian. This fig was likely a dried Butter clam.

To the untrained eye, clam digging may seem straightforward: you head to the beach, dig a bunch of holes, and fill your bucket with tasty treats. But for Coastal First Nations people, clam digging represents only one small part of a much richer story. First Nations people from Alaska to the Salish Sea, including K’ómoks peoples, have cared for beaches using a sophisticated practice known colloquially today as clam gardens.

Clam gardens are intensive mariculture practices in the intertidal and even subtidal zones; they are features built by First Nations people to increase the yield of food and cultural species available at a beach. These features can look and feel different, depending on where you are on the coast. A clam garden in the Salish Sea typically includes a rock wall built along the lowest tide line. This wall traps loose sand and sediment against the shore, slowly transforming the once-sloped beach into a flattened terrace. This terrace extends the ideal growing conditions for shellfish, thereby supporting greater numbers of faster growing clams.

Elders inform us that rock walls are built to encourage other marine species, not just clams. Set at different tidal heights, they can support a wide range of species: from urchins to octopi, sea cucumbers to red rock crabs, seaweeds to scallops. This is why the practice of clam gardening is often referred to as mariculture: the marrying or cultivating of many different species all at once. Elders also inform us that there is more to a clam garden than just the construction and maintenance of a rock wall. A thriving clam garden needs people there too, to turn the sand, remove the rocks and harvest the beach. Only then will the garden be full of life.

Many clam gardens in the Salish Sea have been left untended, and as a result, are no longer as healthy as they once were. In the Gulf Islands National Park Reserve, Hul’q’umi’num’ and WSÁNEĆ Nations are restoring two clam gardens that have not been regularly tended for generations. Launched in 2013, the Clam Garden Restoration Project, is a multi-year project guided by Hul’q’umi’num’ and WSÁNE knowledge holders and monitored by Parks Canada scientists.

Alongside my colleague, Skye Augustine, it is my job to monitor the impacts that clam garden restoration is having on the beach (intertidal) ecosystem. Because the project is grounded in both traditional sciences and western science, the work that I do is highly varied. On some days, I run 100m transect lines across the top of the rock walls and use calipers to measure the incredible creatures that I find hidden in the gaps. Creatures such as: flat-topped crabs, red sea cucumbers and leather sea stars. On others, I share the beach with children and youth from Hul’q’umi’num’ and WSÁNEĆ communities, sitting on pieces of discarded driftwood, listening to stories told by Elders about the land and sea.

The overarching goals of the project are to determine whether or not clam gardens can be used as an effective resource management tool for improving the health of intertidal ecosystems in the Gulf Islands National Park Reserve, and to facilitate opportunities for First Nations people to practice their traditional management and harvesting rights. In the end, we hope to see the state of these clam garden sites improve, leading the way for healthier beaches and providing opportunities for sustainable harvesting to happen once again in the Salish Sea. Hopefully we can then share the lessons we learn with other Indigenous communities interested in re-engaging with this important cultural practice, including the K’ómoks peoples.

BACK ON THE BEACH

It is funny how life works sometimes. As a young girl, I learned how to dig for clams from my dad. Now, nearly 22 years later, I am back on the beach searching for the same double-hinged mollusks that entranced me so long ago. You never quite know what nuances will stick with you on the road to adulthood. For some, it could be mountain biking or a love of music. For me, it’s clams.