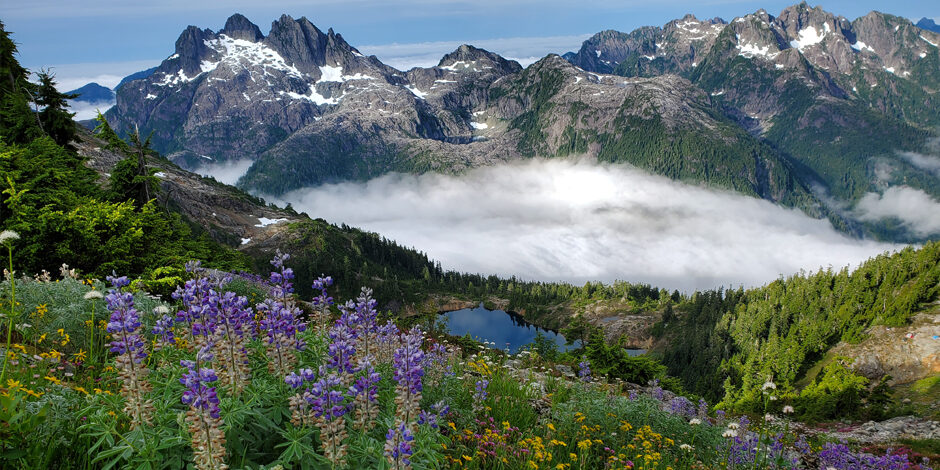 GETTING HIGH ON VANCOUVER ISLAND

Singing the praises of our unique alpine environment.

The secret’s out regarding Vancouver Island and its amazing mountains. While all alpine environments are wonderful, the Island has a certain something that isn’t easy to describe. Those of us who know this landscape already understand. For those who don’t, I’ll try to put it into words. It has something to do with the isolation. The effort to attain elevation. The ruggedness of access. The fact that it’s generally not populated or widely known.

The Island’s mountains may lack overall height, but the stunning peaks (many with ocean views) are nonetheless hard earned through bushwhacks and steep climbs, often starting from low elevations.

Alpine environments are typically treeless because of their climatic conditions. Heavy snow, high winds, and cold temperatures increase along with elevation, until the point at which most tree species and shrubs are no longer able to survive. Latitude also plays a role: for every degree of latitude, the treeline drops by about 110 m. Alpine elevation in our coastal mountains is also lower due to the heavy and prolonged snow loads. Being human in these places is truly humbling, and makes us stand in awe of the species which have adapted to thrive in these beautiful, but rarely hospitable, environments.

While Vancouver Island lacks many alpine mammals found on our mainland mountains, such as pika (Ochotona princeps), goats (Oreamnos americanus), bighorn sheep (Ovis canadensis), grizzlies (Ursus arctos horribilis), and wolverines (Gulo gulo), it does have a few unique characters. Everyone loves Canada jays (Perisoreus canadensis), those clever, bold winged friends who are always eager to take a handout from us. We have our own ptarmigan subspecies, the Vancouver Island white-tailed ptarmigan (Lagopus leucura saxitilis), which is only found here. I love encountering these birds high on a lonely ridge with their adorable chicks in tow. And there’s the plucky Vancouver Island marmot (Marmota vancouverensis), an endangered species starting to make a bit of a comeback thanks to a captive breeding project. In 2003, only about 30 marmots were left, but the most recent count in 2019 estimated 196 in the wild.

Animals are constantly on the move and can be tricky to find, especially in vast terrain and rugged mountain environments. But plants tend to stay put, which is great, because alpine plants are incredible.

Adapted to the harsh mountain conditions, alpine species tend to be compact, growing low to utilize the warmer temperatures closer to the ground. They sleep most of the year beneath the snow, then emerge quickly and launch into their very short growing season. Alpine flowers don’t waste any of that brief window for showing off: many can be observed blooming right after the snow retreats, or, in the case of glacier lilies (Erythronium grandiflorum), emerging right through it.

There is nothing more beautiful than an alpine meadow in bloom. The Island has many gorgeous species including lupines, paintbrush, phlox, saxifrage, arnica… I could write a very long list, but the tremendous diversity is a book unto itself.

There are often only a few short weeks to observe alpine wildflowers, depending on the year’s snow accumulations, and it’s easy to underestimate when summer might begin up high. Some years, the alpine summer may not start until late July or even August, and may last only one or two months. And, as mentioned earlier, the alpine isn’t readily accessible here on the Island.

Want to explore it for yourself? Do your research before you venture out, take food and proper clothing (a word of caution: up here, snow can fall even in the summer), and be prepared to put in effort.

Paradise Meadows is one of the few places where a vehicle can take you up high to begin a hike into the alpine, but there are many remote mountain trails in Strathcona Provincial Park. For even more adventurous types, there’s no shortage of logging roads that lead to hidden treasures. A copy of the Backroads Mapbook and/or Philip Stone’s Island Alpine book will prove an asset in such endeavours.

Though it may take many hours to get there, experiencing the alpine is so very worthwhile. Enjoy it with the reverence it deserves, then sing its praises in the right key—one that fosters appreciation and stewardship for this magnificent Island environment.