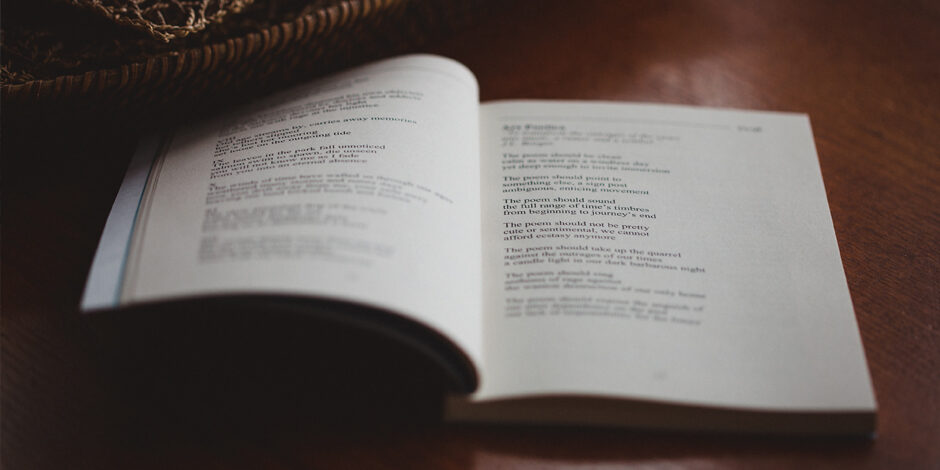 As a vibrant poetry scene emerges in the Valley, a new anthology showcases over three dozen poets’ work.

Every poem tells a kind of story, but poems are not short stories. They are a unique medium which is concerned with universal truths revealed by personal experience.

When I came to the Comox Valley 22 years ago, I had spent my whole adult life in the Vancouver poetry/publishing/art business. I knew lots of poets, so I was surprised to find very few here in the Valley. I only knew three: one on Hornby, one on Denman (who I had met when they lived in Vancouver), and one by reputation.

Around 2001, I met Daniel J. Kirk, a local poet and teacher, at openings at the Comox Valley Art Gallery (where I was a director). We often talked about poetry and exchanged books by poets we liked. Through Dan, I met a half-dozen other poets and we began to meet, read our poems to each other, and invite critiques.

In 2017, Dan, Adelia MacWilliam, and I founded the Cascadia Poetics Lab, a non-profit society devoted to poetry education, and we hosted the first Cascadia Poetry Festival. The festival featured numerous poetry readings and workshops in several locations in Cumberland. It was a surprise success, drawing poets and an audience from Alaska, Washington State, and communities across British Columbia (BC).

More poets have emerged at the Red Tree Poetry readings in Tin Town hosted by Dan (and later by Adelia), and at the Fat Oyster reading series held in Fanny Bay. In fact, in the past five years, a “critical mass” of excellent poets has developed here—probably because so many have moved or retired to “the best place in the world.”

In 2017, I roped Dan into the idea of publishing an anthology of many of those poets. I coerced my wife to do the typesetting and design the cover, and I convinced The Poem Factory (founded in 1991) in Royston to publish the book. This book is number 56 in an ongoing series of poetry chapbooks and books from The Factory.

Dan and I asked poets we knew for poems, put an ad in the paper, and worked the internet. We decided we wanted the best poems possible, so there was no limit to theme, genre, or style.

We received three to five poems each from 55 local poets—an astonishing number for such a small geographic area. We were surprised by the quality of the poems and we read them over and over, eventually selecting work by 38 poets for the book. We did very little editing, preferring to let each poet’s work speak for itself.

Some of these poets have substantial publishing records, but DRIFT is the first publication for a few of them. Though poetry generally flies under the radar of popular culture in Canada, there is a healthy sub-culture of poets, poetry magazines, and publishers of books of poetry which persist in maintaining this art form.

This book is an important cultural event in the intellectual life of the community.

DRIFT: Poems and Poets from the Comox Valley, edited by Edwin Varney and Daniel J. Kirk, published by The Poem Factory/Usine de Poeme, 152 pages. You can get a copy at your local bookstore, by phoning 250-703-0477, or emailing evarney@shaw.ca.