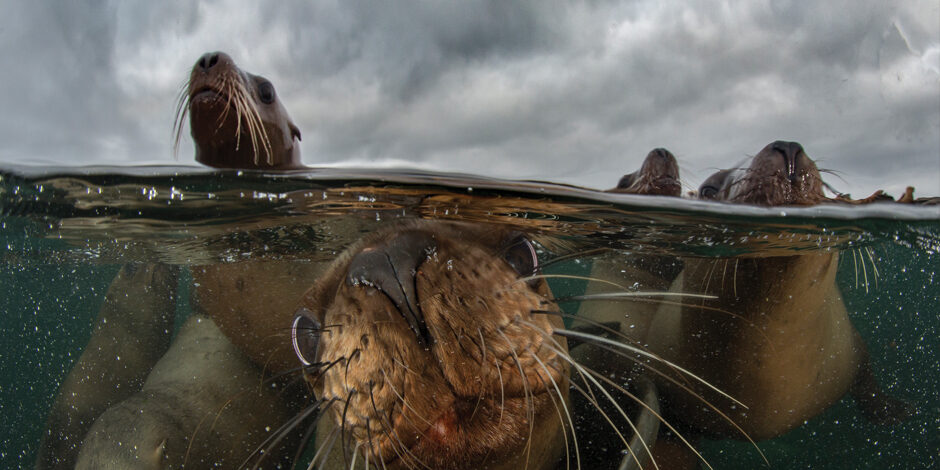 Reflections on life under water.

When I’m under the water, I feel at home. As soon as my head goes below the surface, an almost instant calm comes over me. With the feeling of being weightless, all the “noise” and life stressors immediately begin to fade away, and all I can hear is the sound of my bubbles heading toward the surface. It is very peaceful.

For me, it’s not necessarily about going deep; I prefer to spend most of my time between 20 and 60 feet. This is where I find the most diversity of life—ranging from kelp forests to schools of rock fish, giant Pacific octopus to sea lions—and where there is still enough ambient light that I don’t need to use artificial light.

When I do decide to go deep, a euphoric feeling comes over me. Anyone who’s taken an open water scuba training course might recognize this phenomenon as “the martini effect.” This is diving industry slang for nitrogen narcosis, the physical and mental impairment experienced by scuba divers during deeper dives. The high partial pressures of nitrogen that deeper dives generate can have an anaesthetic effect on the brain.

What it means is that every 30 feet you descend has the same effect on your brain as drinking one martini.

Note: Nitrogen narcosis is not to be taken lightly, since it can also decrease motor abilities and coordination, and can lead to poor judgment and reasoning. However, most divers don’t experience these effects until they reach depths of 90 feet or deeper.

My deepest dive was 160 feet—and that was not by choice. While instructing at Dive Safe International, I led a group of students down to our max planned depth of 130 feet, at which point one of the students, after too many “martinis,” experienced the full effects of the nitrogen narcosis and continued to descend a rock wall to 160 feet, alone.

I chased after him immediately, and when I reached him, he was bug-eyed and completely disoriented, but I was able to assist him safely to the surface.

Most recreational dive training agencies set a 130-foot limit due to the risks of nitrogen narcosis and decompression sickness, and the relatively quicker consumption of air supply the deeper you go. If you want to venture below 130 feet, you will need to take more technical dive training.

I was born and raised in Portage La Prairie, Manitoba, where there is obviously no ocean. My interest in diving started when I was working at a recreation centre, where part of my job description was general pool maintenance. This meant diving into the pool to clean and replace filters and lights, which is not an easy task while holding your breath. I found myself on numerous occasions thinking, “This would be a hell of a lot easier with a scuba tank on my back.”

This thought was what inspired me to pursue commercial diving training programs, which led me to North Island College (NIC) in Campbell River. I packed up all my things, left Manitoba, and moved to Vancouver Island, where I took my Open Water Diver course and then went straight into NIC’s commercial diving program.

Since then I have acquired numerous commercial, technical, and specialized diving certifications, and I started my own commercial dive company, Miller Marine Diving Services, in 2007, to provide dive support to engineering, biological-consulting, and other commercial diving companies.

My love for diving and the ocean has also fuelled my passion for underwater photography. I was honoured to have three of my images featured in Canadian Geographic’s best wildlife photography 2020, and I’ve also had many other images published in magazines and books throughout North America.

Most of my diving has been around British Columbia, but in 2006 I was very fortunate to have the opportunity to spend three months at the Bimini Biological Field Station in the Bahamas. There, I was able to fulfil my lifelong dream of diving with sharks. I dove alongside marine biologists studying a number of different shark species: blacktip, Caribbean, and grey reef sharks along with nurse, bull, great hammerhead, and tiger sharks—my favourite of all. In 2011 I spent five days cage diving with great white sharks off Isla Guadalupe, 240 kilometres west of Mexico’s Baja Peninsula. This was a once-in-a-lifetime experience that I will never forget.

Though sharks are my favourite animals, the Steller and California sea lions on Norris Rock off Hornby Island have inspired some of my best images. Adult male Steller sea lions are the world’s largest, reaching up to 11 feet long and 2,500 pounds, while females can be up to 9½ feet long and weigh up to 800 pounds.

Often referred to as “sea dogs,” sea lions are among the ocean’s most interactive animals. People from all over the world come here to dive with them between December and March, when they congregate here in anticipation of the herring spawn.

Diving with sea lions is an amazing experience. They are very curious and, since they don’t have arms, they use their mouths to investigate things. They often gently bite divers’ arms, legs, dive gear, and even their heads.

We humans may share their curiosity and love of the ocean, but sea lions can stay under water for 15 to 20 minutes on a single breath and descend to 1,500 feet, which means that when they go deep, none of us can follow them. 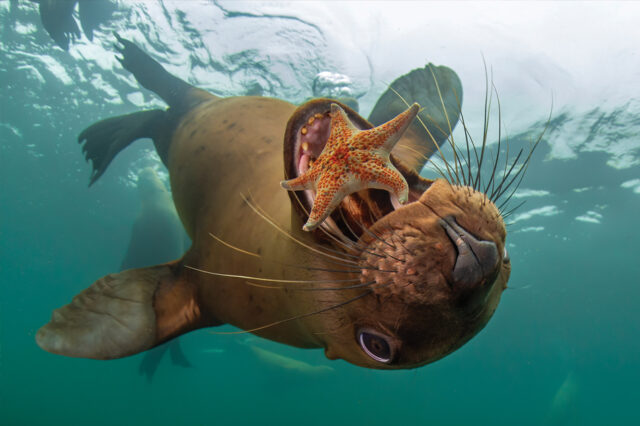