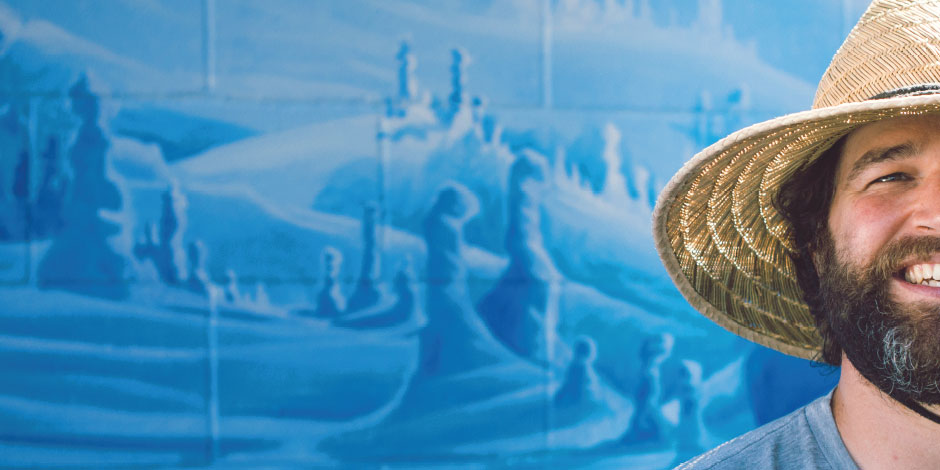 Collaborating towards a beautiful future through art initiatives in the Comox Valley.

Armed with a limited budget, dedicated volunteers, and a substantial amount of exuberance, the Downtown Courtenay Business Improvement Association (DCBIA) was looking for viable artists to create a painting for one of downtown Courtenay’s most challenging walls. The vision was as culturally and historically relevant to the community as the location. The side of the Golden Carriage Building at Fitzgerald and Fifth, a key intersection and introduction to Courtenay’s downtown core, called for a work of dedication and excellence. Enter artists Nick Hutton-Jay and Alex Witcombe.

Creativity was required both in fundraising strategy and concept design. “Leung’s,” as the mural is known, “was tough,” recounts Hutton-Jay. As a professional who travels across North America with a team of artists painting large-scale murals, tough means something. “It was a big campaign with many levels of contribution. Some of it worked and some of it didn’t… the artists took a hit to make it happen and so did the small businesses. It was like breaking hard ground.”

But hard ground eventually gave way, creating a vibrant visual testament to the labour of our community, past and present. “Leung’s” pays tribute to the entrepreneurial Leung family, whose grocery store served the downtown community for over a decade.

Together, small business owners and local artists sacrificed to achieve what could have been an insurmountable objective. Few of us can imagine the strain on relationships, pocket books, and schedules required to achieve public art of this caliber in our community. Although celebrated for our wealth of creativity, it can be shockingly difficult to fund such projects.

“Leung’s,” which Hutton-Jay and Witcome completed in September of 2016, wasn’t just a colourful mural but a road map for future projects created by and for the community. In this instance, Indie Go-Go and Kickstarter campaigns didn’t attract the funds necessary. As ideas for a new mural germinated, stratagem were refined, and the idea that surfaced this time around was crowd funding the good old-fashioned way: by throwing a party.

On Nov. 19, The White Whale restaurant hosted a “Pray for Snow” event. The mural design prepared was the iconic “top of the world” and backside of Mount Washington. Ski Tak Hut quickly partnered, offering the back wall of their store and an initial investment. The DCBIA stepped up to the plate once again to rally local businesses. Companies raffled goods including a Kindred Custom Snowboard, and Done Creative screen-printed Ullr, the Norse god of snow, for a live audience. Proceeds funded almost half the mural budget in a single night (and Mount Washington had an epic snowfall soon after).

“If I could get a mural painted that way every time I would,” recalls Hutton-Jay, who designed and painted the Ski Tak mural. “People want to see these things done and it can be a fun process. The bureaucracy can take away from the creative process but if you have a theme people are excited about… we can make it happen. Whether you bought a beer or a raffle ticket, donated 20 or 1,000 bucks… every person involved can walk by that mural and know they were part of the creative process. If the funding isn’t available, what’s to stop the public from rallying together to make this happen? Communities create culture.”

Collaboration was the key. The Ski Tak mural was completed this summer, and sponsorships, donations, and favours from dozens of local businesses brought it life as much as artists’ brush strokes. Various murals popped up in Courtenay’s downtown core throughout the summer, adding to our destination tourism economy. This is a vested interest for local artists and business alike.

According to Hutton-Jay, the future is bright, as long as the community’s dedication continues. “We have to create opportunities for others and not just ourselves, in business and in the arts. Public art is still lacking here. Where’s the sculpture in Downtown Courtenay? What about other art forms? We have the artists, so why doesn’t our own community have the art? We just need to keep the energy alive.”