GREENER ON THE OTHER SIDE

From snowboard pro to media master, Comox-raised Eric Greene continues to forge his own way in New York City.

Eric Greene’s mornings are different from most people’s. The New York city-based 36 year-old wakes before dawn, makes coffee, grabs his surfboard, and stands on the sidewalk—sometimes in the snow. He and his surfing buddies pass through the boroughs to end up on a beach in New Jersey or Long Island just under an hour later. They pull on wetsuits and slowly submerge into the frigid Atlantic.

“It’s so cold in the winter,” Greene says over the phone from his Brooklyn home. “Growing up surfing the Pacific, the water never changed. It’s cold, but it’s always the same temperature. On the east coast in the summer, we surf in board shorts. But in February it’s brutal. -12 Celsius and windy.”

How did this Comox born-and-raised surfer, snowboarder, and writer end up on the opposite side of the continent? “I grew up in Comox in the 90s,” he says. “The Comox Valley was a completely different place back then. You either played hockey or you didn’t. I never did, so I ended up on Mount Washington instead.”

Greene and his friends fell into skateboarding, which naturally led to snowboarding. The sport was just becoming popular at the time, and Greene found his edge. “I was fortunate to get some opportunities through snowboarding,” he says. “Dad would take me to Whistler for competitions. My mom worked in Vancouver, so I would stay with her and ride those hills.”

It turned out Greene had a knack for it. “I made the national team while in high school. I started going to Europe in grade 10 and 11. It allowed me to gain a broad perspective on the world.”

After graduation from Highland Secondary, Greene hit the road. “I didn’t really live anywhere. I moved to Calgary so I could snowboard in the Rockies and do contests. I was still on the national team. I was doing OK, but I realized I’m not competitive. Like, at all. That shifted my vision.”

Like many pros, the competitive burnout pushed Greene to the backcountry. He spent a winter in Whistler, snowmobiling and working on film and magazine projects.

The world made a significant impact on him. Over the next decade he became a fixture in the North American snowboard media scene, as a writer who could also ride. “It was a good run,” he recalls. “Asia, India, Europe, the Balkans….” Before long he made the natural climb to on-staff positions at a series of snowboard magazines.

As a senior writer at Snowboard Canada, an editor at Transworld Snowboarding, and a founding publisher and editor at Latermag, which he founded with Andre Sayer and Colin Adair, Greene’s voyage through the media landscape was long and varied. Eventually, he wanted a change.

“Ten years went by and it became a hard thing to get out of,” he says. “I had to try and shift out of the snowboard world and into the larger world of media.”

New York made the difference. Five years ago, Greene’s wife, Paige, secured a gig in fashion there, and he took the opportunity to run Latermag from the Big Apple while going to graduate school at New York University. He simultaneously worked as a publishing assistant with Roads & Kingdoms, a long-form travel, food, and politics magazine put out by CNN and Anthony Bourdain. It won the James Beard Publication of the Year prize in 2017. Greene also took home the Award for Excellence in Magazine and Digital Publishing, and was a co-recipient of the William Randolph Hearst Endowment for Magazine Media Scholarship. He now works as a program director with Columbia University Graduate School of Journalism and Oxford University, outside of London. While his life may be deep in academia and the frenetic buzz of NYC, Greene’s heart continues to reside in the mountains.

“I grew up in nature. I like the camping and the outdoors. NYC was never a goal. It just sort of happened. I thought I might as well try it.”

What Greene and his wife thought would be a short-term move lengthened, and the energy of the city continues to hold them. “It’s an incredibly motivating place,” he says. “Seeing how hard people work, and the really cool things they’re working on… once you’re exposed to it, you want a piece of it yourself.”

From patrol surf missions at dawn, to a summertime hiking and camping routine, and a busy global travel schedule, Greene keeps nature front and centre (all without owning a car). Along the way, his interest in media fuels his curiosity for storytelling.

“I have been exposed to a high level of journalism, especially for this age of Trump’s America. I will appreciate having this opportunity for as long as we stay in New York.” 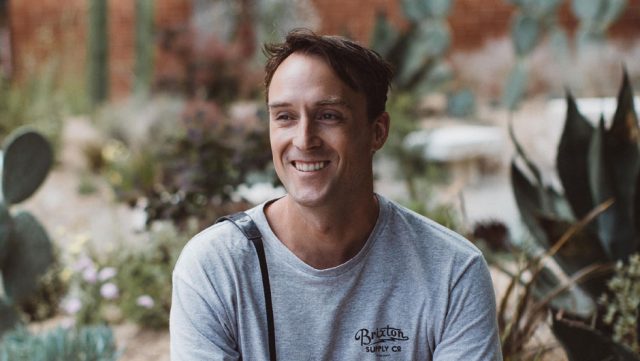