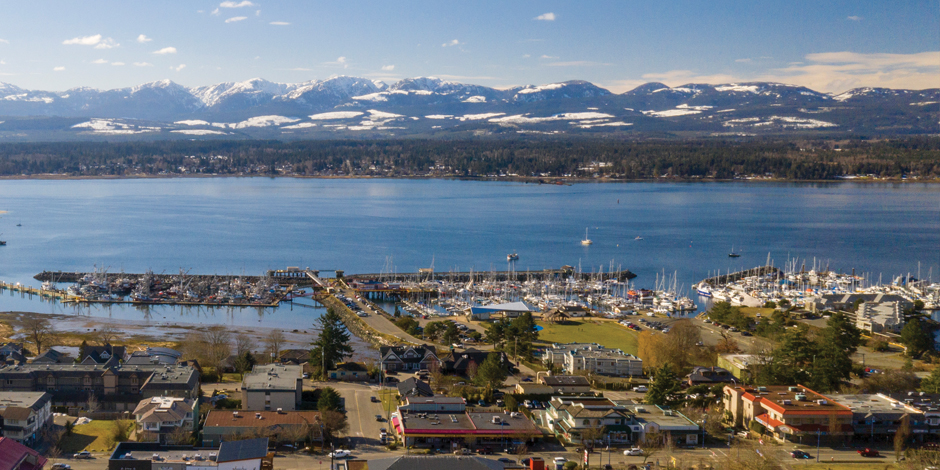 Comox, British Columbia, tops the list of Best Communities to Live in Canada 2040.

The third in our series imagining how the Comox Valley’s communities could look 20 years from now.

It’s hard to believe that Comox was once considered a creaking retirement destination. With solar-powered golf carts zipping between its permanent artisans’ market and botanical garden, the town has a diverse, vibrant, and eclectic economy with a community and culture to match. More than most places on the list, Comox owes part of its success to its location: it’s close to rivers, mountains, islands, farmland, and three other amazing towns: Courtenay, Cumberland, and Union Bay. But Comox stands out because it has evolved and innovated in recent decades like few other places in Canada.

UP THE CREEKS AND ON THE TRAILS

In a recent Statistics Canada survey, Comox residents scored in the top 10 per cent for active lifestyle. Thank a joint campaign with environmental, active-transport, and accessibility groups throughout the Comox Valley that led to the rewilding of historic creeks and building a path along the town’s entire coastline. Nowadays, the oceanfront path connects to a network of reclaimed forests and wetland parks accessible from every neighbourhood. Paths and trails link Comox to the K’ómoks First Nation, Courtenay, and rural areas further north and south. Following streams and working with natural geography helped make the steep slopes rising from the ocean more accessible; 75 per cent of the path system within Comox is now fully accessible.

PARKS WITH A PURPOSE

Comox boasts more green space than any other town of its size, and each of its major parks has a purpose. A decade ago, the town bought the Comox Golf Club and turned it into the Clifton and Mack Laing Gardens, a living museum and heritage site showcasing First Nations traditions and ethnobotany, along with forestry and farming demonstrations. Comox Marina Park bustles with food trucks and a year-round artisans’ market. The expansion of the walking pier—built after the COVID-19 pandemic—has increased the number of spaces for gatherings and barbecues. Seal Bay continues to be a treasure trove of wild oceanfront, towering trees, wildlife habitat, and trails, and the North East Woods is an important reservoir for water retention for nearby farmland, as well as offering an expansive network of trails for walking and biking.

Overlooking ocean and mountains, Comox has inspired artists and storytellers for thousands of years. Longstanding events celebrating this tradition, like Indigenous markets and the Filberg Festival, have expanded. A joint municipal and K’ómoks First Nation artist-in-residence program invites international painters, sculptors, musicians, singers, carvers, and more to create and collaborate here. They contribute to an ever-growing public art portfolio and perform and present at open-air and indoor theatres and galleries. To help inspired local artists get started, the Town runs a Creator Market at the Comox Marina; emerging artists can rent affordable studio space to create and sell their work.

Comox Harbour has long had a reputation as one of the best training grounds for aspiring sailors; the consistent afternoon winds fill spots at local sailing schools and several regattas happen every summer. But pickleball is the town’s new passion. After 20 state-of-the-art local courts were built, and free court time for young people was introduced, the sport exploded in popularity. Since the National Pickleball Team moved its training centre to Comox, local athletes have won three international championships and brought home two Olympic medals this year.

Comox is well-known for its golf-cart streets. Off the main arteries, electric golf carts, which share the bike lanes, are the favoured transportation method, and per capita, this is Uber Golf’s busiest market. With the town’s predominantly south-facing aspect, most residents use solar panels to power their carts; Uber charges its fleet from a solar array built into the runway and fields at the Comox Airport. On the water, electric water shuttles take commuters, shoppers, and students from the Comox Marina to Courtenay, Royston, Union Bay, and Denman and Hornby islands.

The Comox Housing Authority (CHA) is key to keeping housing prices below average for the rest of Vancouver Island. The independent organization partners with private developers on an affordable rental pool; it also sells condos and houses to local residents. Covenants control the future resale price. The CHA’s most recent achievement is an affordable, LEED-certified float-home neighbourhood, with advanced waste treatment, adjacent to the Comox Marina. The housing authority controls nearly 40 per cent of Comox housing, which has helped to bring average prices back down to 2010 levels.

Comox has managed to find a middle ground where growing and diversifying businesses are able to attract and hire the skilled workers they need, despite a generally low unemployment rate. Embracing change and innovation has helped to create dynamic new opportunities.

For many years, Canadian Forces Base Comox was one of the area’s major employers; in the last decade, the former “19 Wing” has evolved into the home of the 101st Emergency Preparedness and Response Regiment (EPRR), a unique branch of the military. The EPRR’s engineering department works to mitigate the effects of climate change in Canada and abroad, while other departments combine search and rescue, emergency response, and medical expertise to prepare for, and deploy to, disasters like wildfires, earthquakes, and major storms.

In addition to the Valley’s longtime reputation as a magnet for health care professionals, alternative therapies now employ hundreds of people here. Several natural pharmaceutical companies have developed treatments for cancer, PTSD, and pain management that use locally grown medical cannabis and psilocybin. It’s the ideal use for the area’s combined agricultural and aging expertise.

A PLACE TO AGE

The old St. Joseph’s Hospital was substantially overhauled beginning in 2022 to create Kw’umuxws Healthy Living, a unique aging-in-place community. This town within a town combines a “dementia village,” a more traditional retirement home, and other intergenerational assisted living arrangements, along with shops, a theatre, restaurants, and pubs. It’s used as a model for healthy aging internationally, employs hundreds of people, and attracts new residents from across the country.

People still flock here to retire, but nowadays in Comox, what used to be old is actually a brand-new way of living.