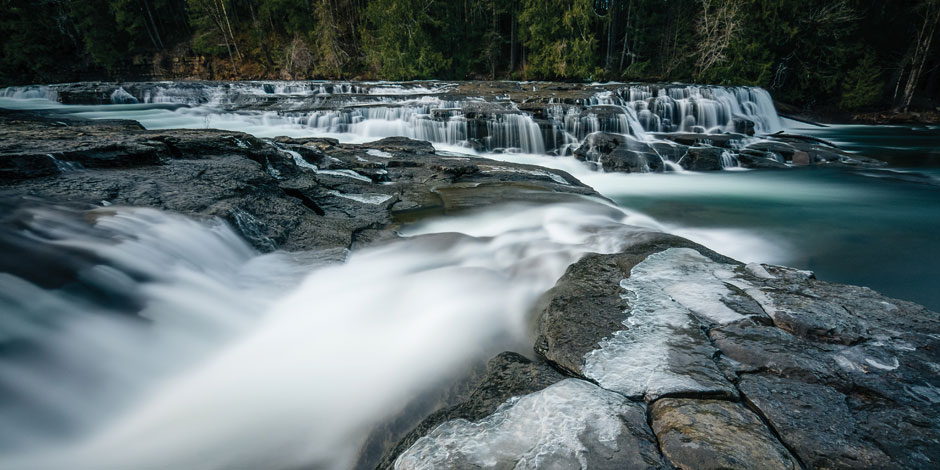 In a rapidly growing community, development sprawl and the preservation of common space is a tense subject. Despite new demands and changing ownership, our old habits are hard to break.

When people in the community fear getting sued for speaking freely about a controversial land development proposal, we’ve got a problem. So, in the interests of protecting the innocent, let’s embark on a thought experiment. Imagine a place they call a valley, but takes a stretch of the imagination to actually view as a valley. Through this “valley” flows a river, but not just any river. It is, to this valley, what the carotid artery is to the human body: essential. On this river is a run of rapids, cascades, and pools that are an integral part of the emotional and psychological geography of the valley. We’ll call it “the falls.” It’s where many babies have received their informal freshwater baptism in perfect, tiny human-sized potholes carved over time by the erosive force of water. Where, in a timeless rite of passage, teenagers huck off cliffs and parents look the other way. Where kids snorkel for hours in crystalline pools, searching for the flash of salmon or trout, and on hot summer evenings, after the daytime crowds have dispersed, mountain bikers stop in for a skinny dip.

“The falls,” and the road leading to and from it, is owned collectively by our imaginations. In reality, it is privately owned by a company in the business of cutting down trees. Many of us treat it with the respect that such a magical place deserves. But a few of us abuse it, swimming in its waters and then throwing empty beer cans, bags of chips, and diapers into the adjacent forest. We are an imperfect species.

For many years the logging company tolerated public use of its land. But maybe “tolerate” is an inappropriate term. After all, the company is the downstream beneficiary of one of the biggest land giveaways in BC history. Back in the 19th century, when Canada as we know it today was a work in progress, the federal government wanted to consolidate its hold on this huge country by extending rails to the far West Coast. Ottawa contributed $100,000 annually towards the construction of a railway on the island. British Columbia kicked in roughly 8,100 square kilometres and $750,000 to the company that agreed to build a railroad on Vancouver Island. In 1884, with riches on the table, Robert Dunsmuir stepped up, negotiating behind the scenes with dominion officials to form the Esquimalt and Nanaimo Railway Company. The Scotsman cared little about railroads. He wanted what was on and below the ground: timber and coal. The so-called E & N Land Grant would make the Dunsmuir family one of the province’s richest.

An important footnote to this story is that Dunsmuir abruptly halted railway construction in Courtenay before reaching Campbell River, the agreed-upon northern terminus. My understanding of contracts is that if the conditions of a given contract are breached or go unfulfilled, then said contract is null and void. However, I’ll leave that for lawyers to argue over. Unraveling more than a century of land sales and transactions that followed the rise and fall of the Dunsmuir resource empire would be unwieldy, if not impossible. Needless to say, this endowment of cheap private timberland, over which there is little regulation of logging practices, was—and continues to be—an enormous windfall for numerous companies.

Let’s get back to “the falls.” For decades, they seem suspended in a more or less idyllic state, enjoying the happy obscurity of a treasured locals’ secret. But secrets don’t last. Word gets out about the valley and watering holes like this one. Soon lifestyle immigrants (such as me) as well as Lower Mainland real estate escapees start relocating to “the valley.” Naturally the logging company starts to shift focus from trees to real estate. After all, once the trees are felled, they sit on vast quantities of developable land on the suburban fringe. Time to put up the “for sale” signs.

Then, along comes another private company that buys the land around “the falls” with big plans. Their plans to build a residential community that would no doubt be named poetically and wrapped in colourful superlatives describing the benefits it would bring to the valley. But let’s face it, most property development is about making money, full stop. The problem is, in the meantime, the planners and politicians charged with managing the future of this valley create a strategy that determines where future growth and development will be concentrated. The lands in question around “the falls” are designated rural. The intent is to prevent the sort of Lower Mainland-esque sprawl that can ravenously gobble up rural and agricultural land, creating a continuously bland, car-dependent, soulless stretch of human settlement that is very familiar to anyone who has been trapped in suburban traffic gridlock. The company asks for an amendment to allow for higher density and hundreds of houses—essentially a new settlement node. In exchange they’ll donate roughly half the land to create a park around “the falls.” Imagine going to the bank with pennies and exchanging them coin for coin with loonies—that’s what such zoning amendments can be worth to a developer without ever having to stick a shovel in the ground.

A vote is taken. The developer’s wish gets denied. Tempers flare. A locked gate goes up on the logging road blocking access to “the falls.” Then a toll booth is erected charging vehicles to access “the falls,” which has now been rebranded a “park” by the developer. It is the company’s prerogative, the same as it would be for you or me to put a gate on our driveways. The obvious play by the developer is to leverage the emotional attachment that people have to a beloved piece of local geography that has long been treated as a public asset, and in turn pressure the land use decision makers to green light the amendment.

It’s an odd tactic that angers many, but convinces some that saving “the falls” is worth the compromise. If so, then why bother taking the time to plan how a place will grow?

As one activist put it: “This is not about a park. This is about preserving rural green space.” A spokesperson for the developer sees it another way. He warns those opposed that this is not a simple choice between allowing a housing development or preserving an existing rural idyll. He says if the housing project is denied, his client will extract value from the land one way or the other, in the form of a gravel pit and clearcut logging, even though most of the merchantable timber has already been removed from the land. Much of what remains is protected by the provincial Riparian Area Regulations, which safeguards a 30-metre buffer on either side of the river that runs through the heart of the valley.

It would appear due process has been followed. So you would think this would be the end of the story, but it won’t be. The valley will continue to grow, and pressure to free up rural lands for development will mount, making the need for coherent urban planning even more important. People will continue to visit “the falls,” to swim in perfect pools and huck off cliffs. Reconditioning decades of patterned behaviour is a difficult undertaking, and this will no doubt be a source of huge frustration for the landowner.

When the backroom deal and E & N land giveaway was inked more than a century ago, most of Vancouver Island would have seemed like an empty wilderness. So they gave it away (even though it was not theirs to give), and opened the flood gates of resource extraction, with indigenous people practically invisible to decision makers at the time. Nowadays, when more and more people want a piece of the valley, the legacy of the E & N land grant, which pits public against private interests, can get ugly. In the meantime, the water flows and the river rolls over “the falls,” through the valley, and into our imaginations.