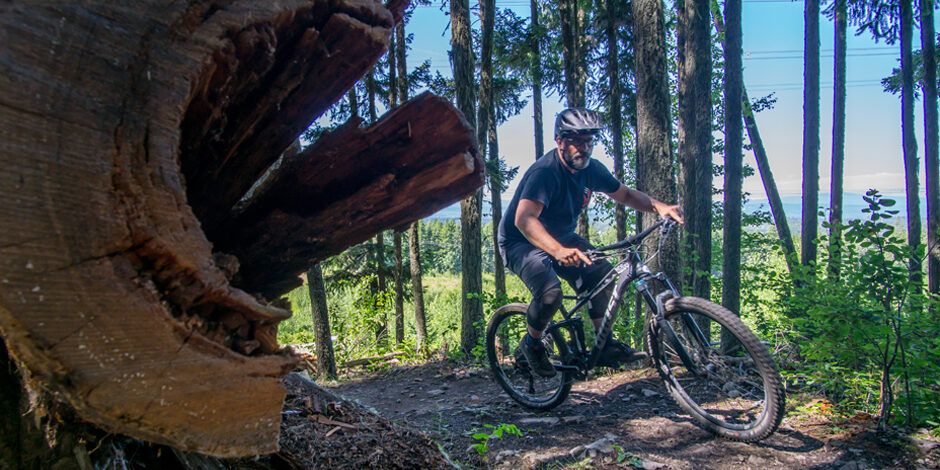 Building up communities, one bike trail at a time, with Patrick Lucas.

One day, the Itatsoo Lake Trail will connect the community of Hitacu, near Ucluelet, to the lake hidden in the rainforest nearby. It will be a place for members of the Yuułuʔiłʔatḥ (Ucluelet) First Nation to get some exercise, access foraging opportunities, and immerse themselves in the environment where their ancestors thrived.

A group of the band’s teenagers hacked at the undergrowth in a half-hearted effort to expose some kind of order from the tangle of the forest. The smell of freshly turned loam, bleeding cedar, and forest funk wafted through the air. Nearly a week into the project, this trail crew hadn’t made it far, and, by the frustration in their eyes, it didn’t look like they were going to make it much further.

But Patrick Lucas was still smiling. The crew might not have been seeing the progress they’d made, but he could. And it wasn’t just the first hints of a trail.

Lucas runs the Indigenous Youth Mountain Bike Program out of his Courtenay home. On the surface, the program partners with communities to train Indigenous teens and young adults to build trails. In practice, it does a lot more.

“It’s not really about the trail at all,” Lucas says. “It’s about building relationships. Between myself and First Nations people, between people within the community, between youth and their territory, and with everyone’s relationship with the land. It took a lot of digging in the dirt for me to learn that.”

Lucas is a community planner by training. An Air Force brat, he lived in Comox as a little kid before his family was posted overseas. He returned home to attend the University of Northern British Columbia in Prince George and went on to work on development projects in Asia and then with Indigenous communities across British Columbia (BC).

“Lots of it was unsatisfying work,” he remembers. “I was the white dude flying in to a First Nations community to write a stupid thick report no one was going to read.”

An avid mountain biker, Lucas brought his mountain bike everywhere he went to help him deal with the stresses of the job. An elder in one community noticed and asked Lucas to help build a bike park. Working with the kids to shape the jumps and berms, Lucas finally felt like he was making a difference.

He started the Indigenous Youth Mountain Bike Program as a side hustle. He’d help communities develop a trail plan, apply for grants, assemble a group of youth to do the work, and then train them in sustainable trail building. Within a few years, bands were calling him from all over the province and beyond. In 2015 he was busy enough to quit his day job.

One of his most successful projects was at Simpcw, a First Nation an hour north of Kamloops.

The singletrack at Simpcw transformed the community from a sedentary place to one with a kids’ mountain bike club and running and walking groups. Lucas has seen a similar shift in just about every community he has worked with. The Red Cross, too, has recognized the positive impact of trails on community health—after forest fires in 2017 devastated First Nations trails at Soda Creek, near Williams Lake, the organization funded rehabilitation work there and elsewhere in the Cariboo.

According to Lucas, it’s the trail crew members who benefit the most. For many, it’s their first job. They learn how to work in a team, to show up, and to see something through. More than anything, it helps them heal.

“For the first few days of a project, it’s a mess,” Lucas says. “The trail mirrors what’s happening in the kids’ own lives.”

This was the case on the Itatsoo trail. Lucas spent the first week running up and down the line, talking to the kids, helping them work through their feelings.

“Trail building is physical, hard work,” he explains. “It brings up trauma, shame, anxiety, and frustrations. And for some reason, digging in the dirt helps them work through these feelings.”

As they do, the trail starts to take shape, too.

“Every day they come to work, they walk the trail and see the progress they’ve made,” says Lucas. “They see the path forward getting easier and they start to wonder, ‘What else can I accomplish with a little hard work?’” 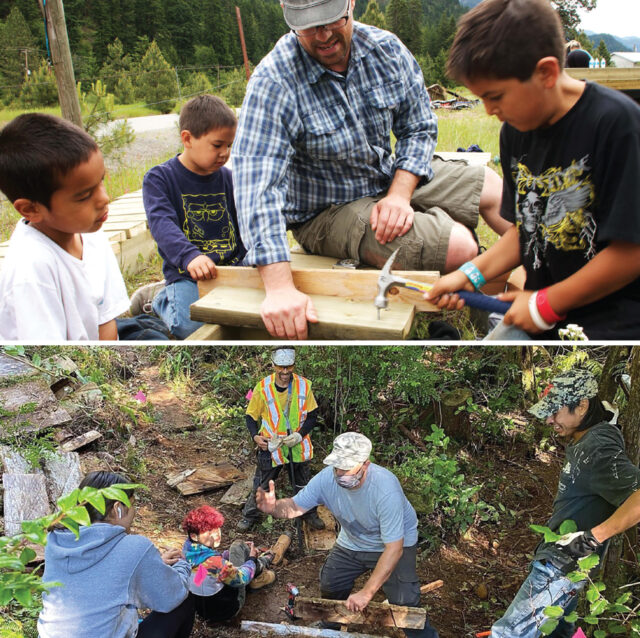